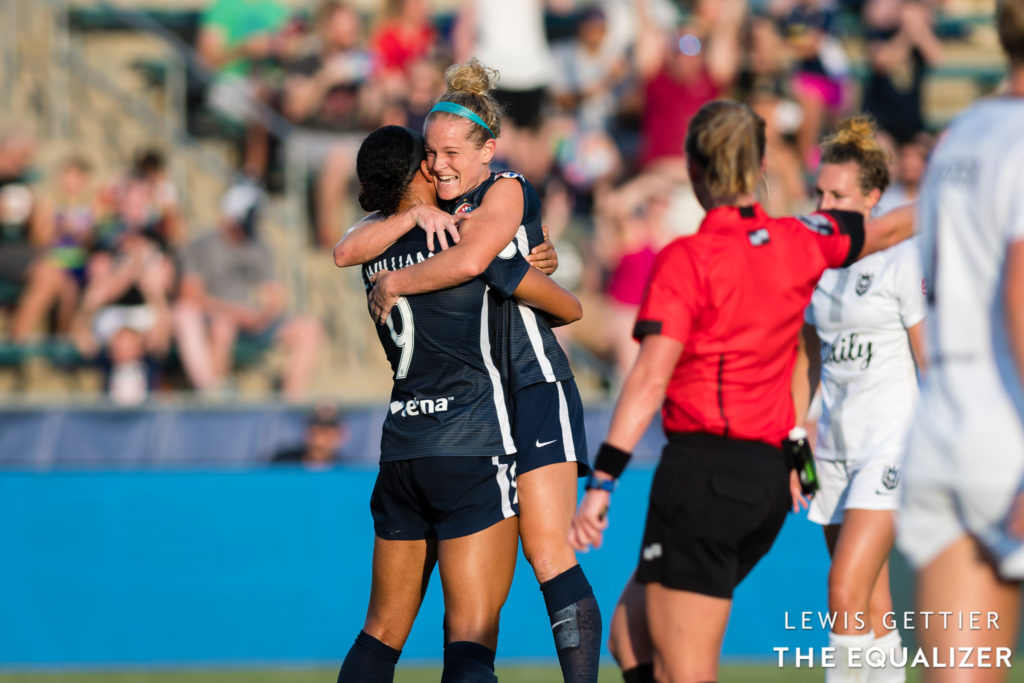 A match between the NC Courage and Portland Thorns FC in Week 13 of the 2019 NWSL regular season at Sahlen's Stadium at WakeMed Soccer Park in Cary, NC - Saturday, July 13, 2019. Photo by Lewis Gettier/The Equalizer.

One of those losses was against the Reign, back on May 27. However, it’s now July and the tables turned in favor for the Courage. Lynn Williams kicked off the scoring in the 22nd minute. Her shot was assisted by Kristen Hamilton, who has been dominating in an attacking role for North Carolina during the month of June and early in July.

Debinha, the Brazilian international who was present for the World Cup in France, netted the game-winning goal early in the second half. Assisted by Merritt Mathias, Debinha’s shot helped North Carolina gather three points.

It’s still anybody’s game in the NWSL, with playoffs not starting until October. There are plenty of regular-season matches to go, and these two sides will meet again on Aug. 24, back in Cary.

However, for now, three points and a place back on top can give the Courage some much needed confidence. They’ll have all their internationals back, too. Sam Mewis, Crystal Dunn, Abby Dahlkemper and Jess McDonald will become available for selection once again on July 21, when the Courage take on Chicago.

Meanwhile, up next for the Reign is a home match in Tacoma against Chicago on July 28. With nine teams featuring in NWSL action, one team is required to have a bye each week.

The game got off to a late start as warmups were delayed by a brief but fierce shower, with lightning a threat. However, there was nothing late about Chicago, who opened scoring in the seventh minute. Katie Johnson received the ball on the right flank outside the box and launched a low and quick shot to the far post, just past Jane Campbell.

After that, Houston seemed to have the better run of play as their midfield did a good job of keeping the ball away from Sam Kerr in dangerous spots, particularly after Sofia Huerta and Kealia Ohai switched sides, but they couldn’t find the final pass or shot to threaten Emily Boyd.

It was more of the same in the second half, as the Dash saw more of the ball but couldn’t convert. For Chicago, Sam Kerr rarely saw the ball, dropping deep to pick it up when she did. The most notable event was Nikki Stanton picked up her fifth yellow card of the season.

Houston threw everything they had forward, including subbing off both their fullbacks, but Boyd stood strong in goal, and Chicago picked up three points on the road.