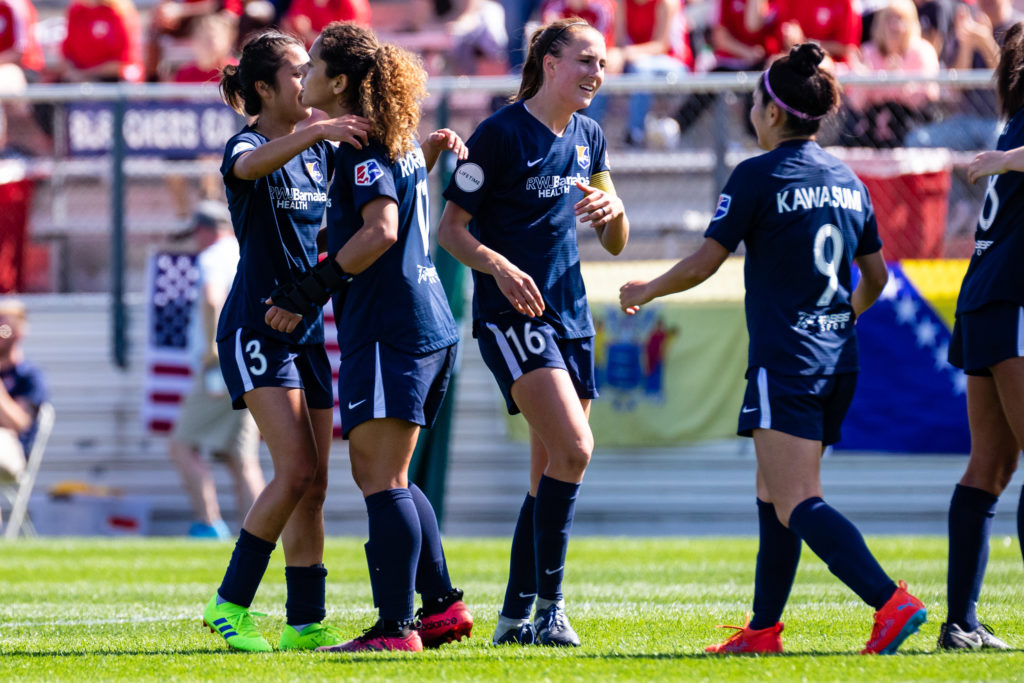 Sky Blue FC', Rachel Rodriguez (11) celebrates a goal against the Washington Spirit at Yurcak Field in Piscataway, NJ May 11 of the 2019 NWSL season. Photo by Tom Salus.

Bow down to Jen Hoy. The Sky Blue FC striker came through in stoppage time of the second half, with a last-minute goal to give Sky Blue FC three points. Sky Blue FC has now compiled two-straight victories, after defeating the Chicago Red Stars last weekend.

This is the first time since August 2017 that Sky Blue FC has won two-straight matches.

There were chances from both sides at Yurcak Stadium, where the attendance was announced to be 1,842 fans. However, Nicole Barnhart made two saves on the night, stopping chances from Elizabeth Eddy and Raquel Rodriguez. Meanwhile, on the other end of the pitch, Kailen Sheridan was forced to make one save against Amy Rodriguez. This was Sheridan’s second game back for Sky Blue FC, as she was part of the Canadian Women’s National Team in France in June.

Sky Blue FC still remains in last place in the NWSL standings, but is now equal with Orlando Pride. Both sides have eight points, but Orlando has featured in 12 games, compared to the 11 played by Sky Blue FC. Meanwhile, the Utah Royals FC currently occupy the fifth place spot, just outside of the playoff cutoff. Utah has 17 points to their name, under head coach Laura Harvey.

Up next for Sky Blue FC is a road trip down south to face the Pride on Saturday, June 20. As for the Royals, Rodriguez and company will head back to Utah for two-straight home matches. First up, the Royals will host the Portland Thorns FC next Friday.

.@raque_rocky rips a volley, but it lands safely in the arms of @nbarnhart.

A goalkeeper's best friend. The post denies the opener for @UtahRoyalsFC.