Over and out from the 2019 Women’s World Cup 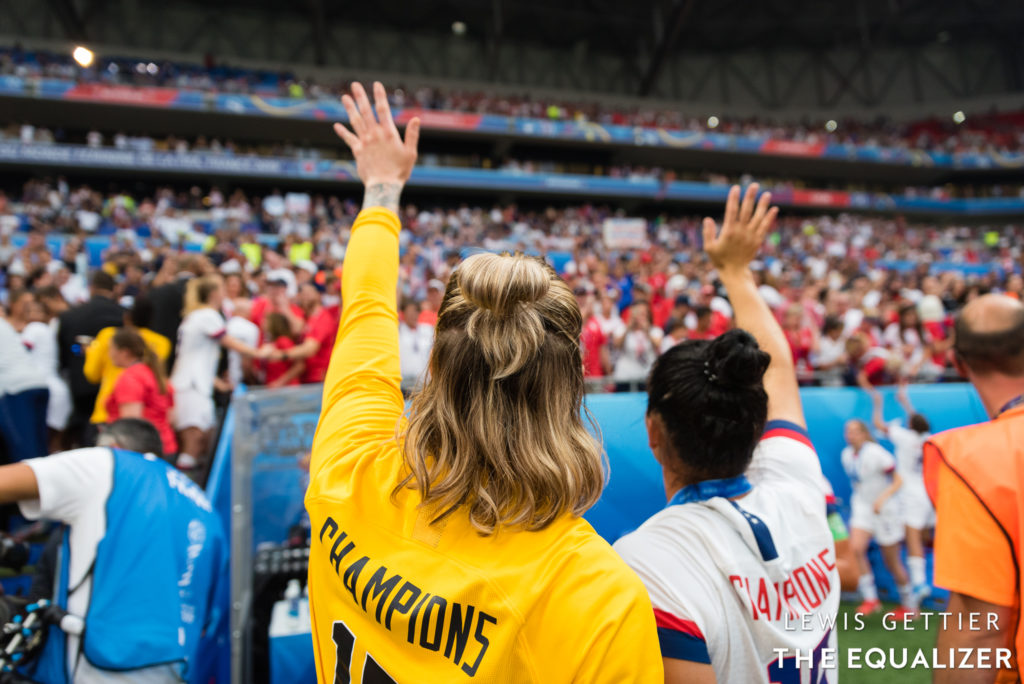 PARIS – It’s day 37 on the road, and the finish line is here. I’m sat looking at my departure gate at Orly Airport, where the chaos of the country’s capital, just to the north, feels like a far-off land.

The 2019 World Cup is over, and the United States women are champions again. They did exactly what was expected – which is sometimes the hardest thing to do. Their fourth World Cup title gives the U.S. program as many as the rest of the world’s women’s programs, combined. And while there were moments that were more difficult than predicted – the boxing match against Spain in the round of 16, and the war of attrition in the final against a plucky Netherlands team – this U.S. team was clearly the best in the tournament. It’s also more individually talented than ever.

We’ve written at length about that over the past month-plus, and we have plenty more content to publish in the coming days and weeks. You can read all of The Equalizer’s coverage of the United States women’s national team here, and you can check out everything from our 2019 Women’s World Cup coverage here.

Firstly – and personally – I thank my wife, who is the kindest soul you’ll ever meet. This is the second World Cup that I’ve covered abroad in its entirety, the first of which came while we were planning a wedding. I’ve covered two Olympics for NBC, which are a similar version of climbing into a digital sporting bubble for a month, but those were at least at home, in Connecticut. Whether you work in media, for a team, for FIFA – or even play in the competition – these long trips from home aren’t easy on anyone. My wife is my biggest supporter, and without her, I’m not here writing this.

To our readers: You are the reason we exist. Now, in the days after another smashing World Cup, is the time when we all begin to wonder what’s next for the sport. How can this momentum be sustained? It’s an exhilarating but frustrating conversation – and one we have every four years. There is undoubtedly progress being made – and there’s still a long way to go.

Advertisers remain hesitant to get on board outside of these World Cup windows. With this tournament in the books, I’ll be heading into my fourth cycle of doing this, and those ‘gap years’ are a challenge for everyone – media, teams, leagues and players. That’s why we made the decision last year to create a subscription option for premium content. Your support is what allows us to have eight staff members in France covering the World Cup, as well as more of our great team members kicking in back home. Without subscriptions, this operation would not exist right now.

And the truth is, to truly continue pushing this sport forward and covering it the way we do – professionally, seriously, with insight and, when appropriate, comedy; to cover it in text, on video and audio, in person and from afar – we still need more investment. Media play a significant role in women’s soccer’s quadrennial spike in attention – as well as the lull in the in-between years.

Four years from now, I see us sitting in another airport – perhaps Sydney or Tokyo, the way the current bids look – and wrapping up an even better World Cup, with even more robust coverage. Speaking truthfully, we’ll need more subscribers, and more outside funding in order to do that.

And this is where I need to say thank you to those who have supported us and seen the value in what we do – those who have gotten on board with us and with the sport. ProActive Travel organized two successful trips to France this summer to explore the country with hundreds of American fans. They, like us, have been doing this a long time and confidently believe they are the best at what they do. My colleagues and I joined ProActive and you, the fans, in a partnership which similarly made possible our coverage. If you took part in one or both of our trips, I thank you for joining us. You’ve directly supported The Equalizer by doing so, and I hope you had fun.

I heard from some of you that you were going to France no matter what, and that you went with ProActive Travel based on our recommendation. Let them know. I hope we see you again at the next World Cup, if not sooner.

Thank you to Goal Five, the disruptors who are making soccer apparel a female-first industry. They’ve been supporters of ours for a while now, and they made possible our Women’s World Cup Daily show. If you want to support brands that are supporting us – and, more importantly, growing women’s soccer – make your next soccer or athletic apparel purchase one from Goal Five. Let them know why you love what they do, and why you support them. Goal Five has said ‘yes’ when so many others have said ‘no,’ because they understand the market.

Thank you to our staff who were in France providing rock-star coverage here in France: Dan Lauletta, John Halloran, Harjeet Johal, Lewis Gettier, Daniela Porcelli, Katelyn Best and Tim Grainey. Gavin Colbert brought you all the wonderful video that we did on the ground. Claire Watkins, Chelsey Bush and Rachael McKriger anchored our coverage Stateside and put in some long shifts while juggling a whole lot of things.

So many more people, many of whom you’ll find thriving now at other operations, have made The Equalizer tick for the past decade. Sophie Lawson, Brenda Elsey and Erica Ayala are among those who made our World Cup coverage great. Kieran Theivam, my co-author for “The Making of the Women’s World Cup,” is an honorary EQZ lifer. Patti Giobetti has been an all-star for us for as long as I can remember.

Thank you to Jordan Angeli, who hosted our Women’s World Cup Daily show and went above and beyond to promote The Equalizer. Jordan’s a pro, and I’ve no doubt she’ll soon be all over your TV screens even more than she already is.

Thank you to our media colleagues, team officials and FIFA media team, all of whom recognize and appreciate what we do. We aren’t a massive operation, but we’re treated as equals with publications of far greater scale and net worth than our own. I recognize that is both earned and not a given.

Likewise, thank you to the BBC and Sky Sports, among others, for recognizing the legitimacy of what we do and giving us a platform throughout the tournament to provide our expertise to an international audience.

I published the first article on this website on July 16, 2009. In exactly one week, we’ll turn 10 years old. Honestly, I haven’t had time to plan much of a birthday bash, so I’m totally open to celebration ideas.

People often ask me what I was thinking when I started this site. What made me want to do this? To me, it was and is simple. We cover women’s soccer; it’s soccer. There’s a place for that to be discussed, debated, scrutinized and celebrated. I’ve never seen this as some wild and crazy idea, even if the outside world might view it as such. Many people through the years have looked at me like I’m a mad man for doing this. I’d be lying if I said that, at times, I didn’t think the same myself.

But 10 years on, I see the change. I see stadiums full when they were once empty for the United States women’s national team, in those dark years between leagues and between World cup titles. I see a league which still faces a lot of challenges, but has lasted more than twice as long as the first two incaranations. And it’s a league that is now being challenged by Europe in serious ways – including commercially – something I’m not sure I would have imagined years ago.

France offered up its fair share of challenges, from the everyday logistics of just trying to get around, to the opportunities it presented to us to cover the game, and how we tried to be unique and thoughtful in what we did.

The truth about major tournaments is that they are never perfect. The U.S. women weren’t perfect at this World Cup (nor the last); they were just really damn good. They were better than the rest. And while I’m as guilty as anyone of trying to aim for perfect, and getting caught up in the weeds on the journey to that point, that high bar is the place we should all be aiming.

I often find that players’ struggles in this sport run parallel to those of us covering it often face. The seasons can be long and grueling. The pay is generally low. The recognition is often lacking. We persist because some weird part of us loves what we do.

Again, I found myself relating to the players on this World Cup journey. I was asked countless times in France about whether these U.S. players were arrogant. I’ve read some of the comments from those who think that they are. But I relate to the players in this regard: Of course they believe that they are the best at what they do. We should all think that. If we didn’t, then what are we doing?

There are things I’d do differently with this World Cup. I felt the same after Canada 2015. And I’ll probably feel the same in four years, because there’s always room to grow. But I’m still humbled and proud of what we’ve accomplished and where this sport is going. The ability to cover the World Cup is never guaranteed, and, much like players, we have to enjoy the moment.

Right now, I just want to say thank you.

Despite loss in final, Netherlands still won over a nation
Logistics were a real problem in France