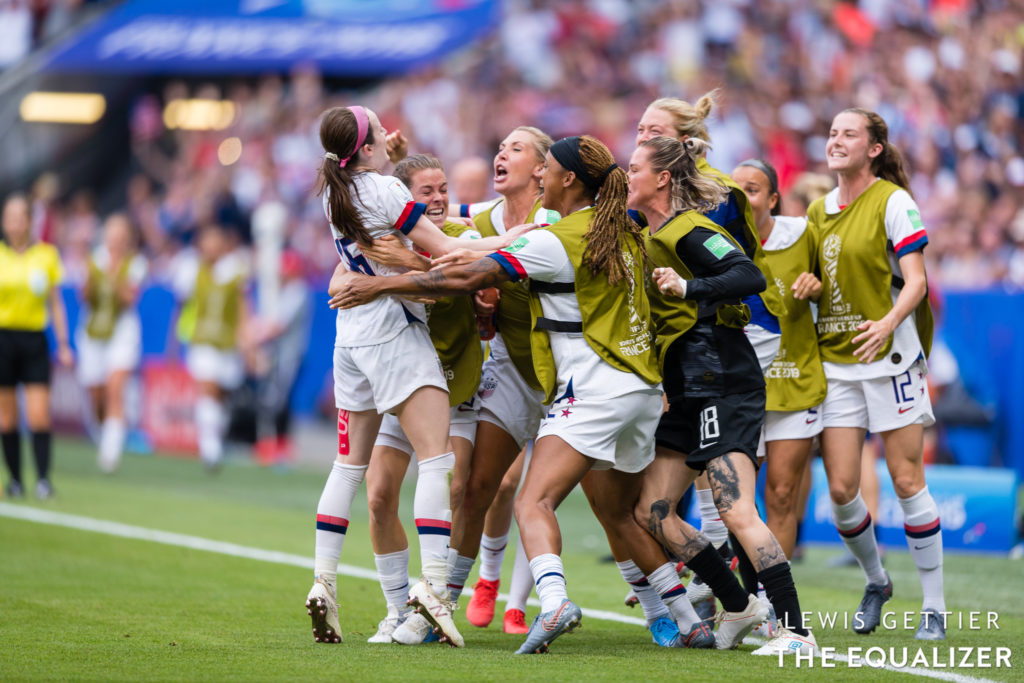 LYON, France — Most teams say they are close-knit, but the United States women’s national team is showing it, too. On Sunday, they won the World Cup for the fourth time in program history — and second consecutive time — and throughout the tournament, they spoke of the closeness of the team.

“We’ve created such a bond, this team is so freakin’ close,” U.S. goalkeeper Ashlyn Harris told The Equalizer. “We genuinely care about every single person. I’m so happy and proud of this team. People don’t understand that we live under pressure 24/7 and it’s freakin’ tiring; it’s draining, taxing. They showed up, and they rise again, and they freakin’ rise again. This group is incredible, with a lot of lack in experience. People came out here, and showed up. You talk about the Rose Lavelles, Sam Mewis, Alyssa Naeher. We could collectively had never won this if we didn’t have every single person out there giving every last bit of what they had to this team.”

It’s a challenge to bring a team together with so many strong characters and personalities — a constant challenge for the star-studded U.S. program. There wasn’t any readily apparent drama or division in the U.S.’ 2019 World Cup squad.

But that hasn’t always been the case. Coach Jill Ellis has often faced criticism, as well as skeptics questioning her every move. She faced a reported player revolt in 2017, when players grew concerned by a purported lack of communication from Ellis off the pitch. Then U.S. Soccer president Sunil Gulati dug in and stuck with Ellis — and she adapted accordingly. Tom Sermanni wasn’t as fortunate in 2014, when there was also player unrest within the team.

Sunday’s victory to clinch a second straight World Cup title means that, once again, the results speak for themselves.

“We knew this wasn’t going to be easy,” Harris added. “We’ve gone against the best teams, every four days, and we rose to the challenge. No one can say that our path was easy or smooth sailing. We had to grind in ways that we never had to before. It shows the character of this team. I’m just so freakin’ proud of them.”

The 33-year-old Harris didn’t see a minute of action at the 2015 or 2019 World Cup, but she was overjoyed to be part of such a special bond.

Windows into the team’s friendships were apparent the day before the final, when U.S. winger Megan Rapinoe held back tears while discussing how close the team is.

“I think the highlight for me – obviously being an older player, one of the captains on the team, a veteran – just seeing the younger players rise to this occasion has been incredible,” Rapinoe said one day prior to winning the World Cup, the Golden Boot and the Golden Ball.

“For me, it’s every game [that] there’s another moment that is so special, and so special about this team. Everyone always talks about as a team you want to be close and have that camaraderie; Jill alluded to it earlier. We really do have a very tight team and a very close team; whoever needs to be leaned on in that one moment, the whole team is comfortable leaning on that one person. So, just to see the way everyone has stepped up and embraced their role and done it with such passion and joy this whole time has been absolutely incredible.”

Ali Krieger, who returned from a two-year national team hiatus in time to make the World Cup roster — and play in the final — spoke of how close this team was when she came back into the fold this spring. On Sunday, she saw that pay off.

“It’s so rewarding,” Krieger said. “I’m so happy to be a part of an incredible team, and celebrated women. We worked our butts off to get to this moment. I’m so grateful for this medal because of how hard I worked to get back to the team the past few years. I stayed ready those two years for this exact moment. All that hard work, sweat, tears. Everything that’s gone into it the past four years.”

A team can have all the talent in the world, but it also needs chemistry. The Americans have that championship pedigree, and that’s why they’re still ahead of the pack while the rest of the world is making strides, but still catching up.

“It’s really cool to have a group of players that is just so entwined to each other in this process,” U.S. winger Tobin Heath said. “The unity of this group is incredible. The determination and the togetherness is – I can’t speak to it – it’s just incredible.”

“It truly is a dream come true,” midfielder Julie Ertz said. “We did it with 22 of my best friends. To win that with them is great.”

Ali Krieger: ‘This one means more to me’
The legacy of the 2019 Women’s World Cup is about much more than soccer