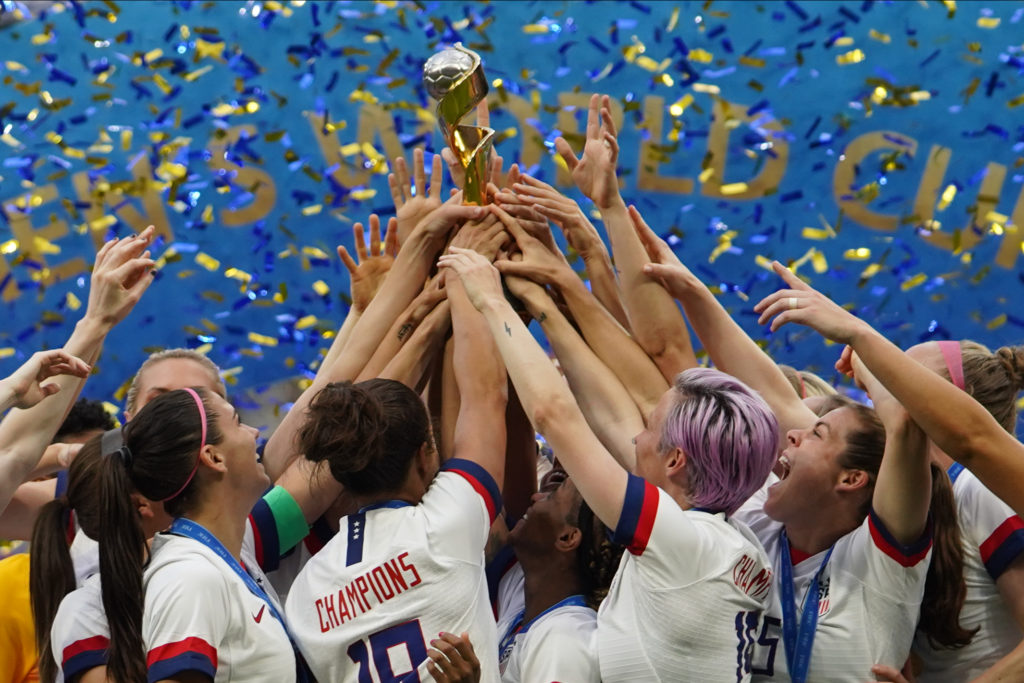 LYON, France – It’s surreal to be in a stadium hours after a championship match. Raucous fans are gone and the noise inside the stadium reduces to leaf-blowers clearing the confetti from the field, along with the occasional loud clank of a distant metal bleacher as staff clean up. It’s sobering, really. This big thing happens — and then it’s just…over.

On Sunday, at the Stade de Lyon — which we can all go back to calling Groupama Stadium — that big thing was the Women’s World Cup final. The United States defeated Netherlands, 2-0 to claim a fourth World Cup title in eight tournaments — a stunning level of domination over 28 years. The sellout crowd of 57,900 was comprised of mostly U.S. fans who, by Monday afternoon, had fought their way through Lyon’s ill-prepared public transit to return home. The World Cup is over.

So, now what, exactly?

“Legacy” is a term used often around World Cups and Olympics. Traditionally, it’s a political buzzword meant to rally a host nation around the idea of spending exorbitant amounts of money to host a one-month sporting event. Legacy has traditionally focused on a combination of the host team winning – what it would mean to see your nation’s flags on top of the podium – and infrastructure. The general public was long sold by politicians on the idea that new stadia would somehow lead a country into some great new era, but grim scenes in places like Greece and Brazil, following their major tournaments, are stark reminders that such logic is flawed.

A major tournament’s legacy is about what comes next for the sport, for the host country. It’s about creating a better future for people – creating real, numerous pathways to success for real people in all walks of life.

One obvious area of measurement for France will be participation. Brigitte Henriques, the vice president of the French Football Federation, noted on Friday that France 2019 will create opportunities for young girls to play soccer. She spoke of young girls being able to find teams in their local communities. Fifteen million euros will be allocated to clubs across the country to grow their girl’s programs. The French women’s first division, Division 1 Féminine, secured a title sponsor during the tournament. Clearly, there are commercial advancements taking place.

Whether or not the 2019 French women’s team, which fell to the U.S. in the quarterfinal stage, inspires the way the 1998 men’s team did will take years, if not decades, to conclude.

FIFA president Gianni Infantino echoed Henriques’ thoughts. “There will be a before,” he said – motioning to his right and pausing for dramatic effect, before motioning to his left – “and an after.” He rattled off a list of five proposals he would make, including expanding the Women’s World Cup to 32 teams – perhaps in time for the 2023 edition.

One month ago, in a convention hall in Paris, on the morning of the opening match of this World Cup, Infantino triumphantly declared that FIFA would be investing $500 million into the women’s game over the next four years. On Friday, in Lyon, Infantino said that number would actually double to $1 billion – perhaps in response to the tournament-long demand for more support of the women’s game from FIFA.

Politics are inherently part of sports, and they are the prevailing storyline of this World Cup. Whether that’s fair or not to the actual quality of play on the field – more competitive than we’ve ever seen at a World Cup – isn’t the point. The heart-tugging stories of Jamaica qualifying, Argentina erasing a 3-0 deficit, Italy upsetting incumbents, or the U.S. and Netherlands marching to the final, mean nothing without sustainable plans toward equality in those countries – in sports and society.

Infantino’s very proposals are political. They were strategically delivered on the big stage, ahead of the World Cup final, with the attention of the world fixed on Lyon. These are strategically timed to shape the narrative that FIFA is doing wonders for the women’s game. And they are almost certainly a response to the Megan Rapinoe-spearheaded fight for equality.

Infantino handed over the Golden Ball and Golden Boot to Rapinoe — and the World Cup trophy to the U.S. — on Sunday after being booed by the crowd before a clear “EQUAL PAY!” chant echoed throughout the stadium.

“Just pleasantries,” Rapinoe said when asked what Infantino said to her. “Just wry smiling, for sure. He knows that I know that he knows that I know. I think he did say, [let’s] have a conversation or something about it.”

Investing $1 billion is, no doubt, significant. As Rapinoe said in her pregame comments on Saturday – and has maintained for a long time – more is always going to be required. Rapinoe has been the center of attention at this tournament, for her off-field stances and willingness to fight systemic issues as much as her on-field play.

“The political sphere and the sports arena should be separate,” Infantino said in his final words of Friday’s closing press conference for the 2019 Women’s World Cup.

To do that would be to turn a blind eye to the early signs of what the legacy of this World Cup will be. Years from now, we might remember this as the World Cup in which the U.S. repeated as champions. We might remember it for France and England falling short, and for seven of the eight quarterfinalists being from Europe. We might even remember some of the contrived controversies around celebrations, and the double-standards female athletes face for showing the slightest bit of personality.

But the legacy of this tournament is most likely to be the one of change. As important as the on-field successes of the U.S. were, the Americans’ willingness to use their increasingly large platform to fight for change – for equal pay, for equal treatment in media, for equal representation in board rooms, for women well beyond the world of soccer – is what will define this World Cup for them as much as that fourth star. That isn’t unfair to them, either — that’s how they want it to be. They’ve actively chosen to use their platform to force these conversations. And they are joined by other, less-visible movements, from Argentina to Jamaica and Nigeria.

Increased investment is essential. But it means nothing without a change to the way leaders think about and approach the women’s game. Changing perceptions – which are cultural and societal – is what will turns these changes into realities.

Rapinoe and Alex Morgan and Becky Sauerbrunn and Christen Press – and all of their teammates – have asked the questions. Why not equal pay? Why shouldn’t they be confident? Why should they have to share the day with men’s regional tournaments?

The Americans were called a lot of names during this tournament. Above all, they were accused of being pompous. But on their way to conquering the competition on the pitch, they successfully shaped and reshaped their own narrative, which is increasingly changing the way the world things. That will be the legacy of the 2019 World Cup.

A team united: Camaraderie central to USWNT’s World Cup triumph
Despite loss in final, Netherlands still won over a nation