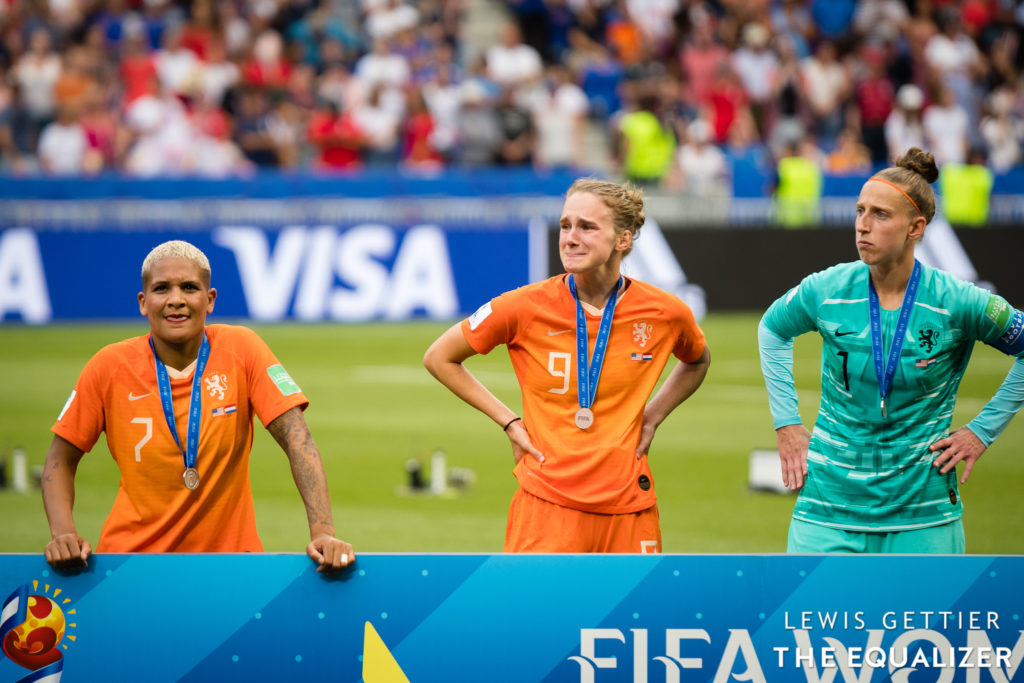 LYON, France – Netherlands’ orange wave came to an end on Sunday at Stade de Lyon as the United States scored a pair of second-half goals to win the 2019 FIFA Women’s World Cup, 2-0. The Dutch coasted through the tournament, never really playing to their full potential. They kept pace with the U.S. and frustrated them at length in the opening half.

Stefanie van der Gragt’s high boot on Alex Morgan was a turning point. The Dutch center-back did not know Morgan was streaking into the box. She gave full credit to the U.S. captain for her smarts, and tactical play in earning the U.S. a timely penalty.

“I think we’re all devastated,” Dominque Bloodworth told The Equalizer postmatch. “After all, we can see how proud and far we’ve come. Just noticing that four years ago was our first World Cup. Now it’s our second World Cup, and we’ve made it all the way to the final.”

“I think we even made it difficult for America,” Bloodworth added. “It’s just unlucky that we lost. We’re all devastated and upset right now. Tomorrow we will be very very proud of the achievements we’ve made.”

The U.S. was unable to crack Netherlands’ defensive block in the opening half. Golden Glove winner Sari van Veenendaal made four key stops, and kept her side in the match. Netherlands’ quick counter generated opportunities, but it was nothing the U.S. could not contain. While the defense first approach worked, it wasn’t sustainable.

The 24-year-old Bloodworth knew that a strong counter would have to be key, if the Netherlands were going to try and play a lock down, defense first World Cup final.

“We were just fighting like Lionesses in the back to make sure that we kept a clean sheet. The penalty was a turn around, and it makes it difficult. You have to score two goals and then it’s going to be really difficult to win the game.” Bloodworth said.

The U.S. was always going to create chances and show clinical precision in the final third. Netherlands Coach Sarina Wiegman, left spark plug Shanice van de Sanden on the bench in favor of an in form, Lineth Beerensteyn.

The lone remaining Olympique Lyonnais, product was proud of her teammates.

“A lot of emotions,” van de Sanden told The Equalizer. “I’m disappointed, because when you play a final, you really want to win the final. Of course we knew how good U.S.A is. I think we were really close in the beginning. Of course they have some extra power. You saw that after the penalty. They brought more power into the game, but I think we can be proud of ourselves. Disappointed, you play the final, to win the final.”

The Dutch support today, as always, was incredible ?#DareToShine pic.twitter.com/DwnVLKyjWI

The throng of Dutch media covering the Netherlands have been harshly critical of the teams performance throughout the tournament. There just hasn’t been the same offensive flare, and creativity that helped the Netherlands win Euro 2017.

Vivianne Miedema, Lieke Martens, and van de Sanden have been under a microscope.

“Yeah, I know that,” van de Sanded acknowledged the criticism. “It was a tough tournament. Tough stuff makes you stronger. I have to be proud of my team, and myself, because we have the silver medal. We are second in the world.”

“You always have to stay positive you,” van de Sanden continued. “There are tough moments in life, and when you are in sports. Keep your head up, and on to the next one. I will enjoy my holiday, and that’s it.”

The Netherlands went toe to toe with the best team in the world, and they held their own. It’s not the result that they wanted, but it’s a positive step forward as the Netherlands continue to climb the ranks with a tremendous future in the beautiful game.

From the penalty spot to the podium, Megan Rapinoe ruled this World Cup
Ali Krieger: ‘This one means more to me’