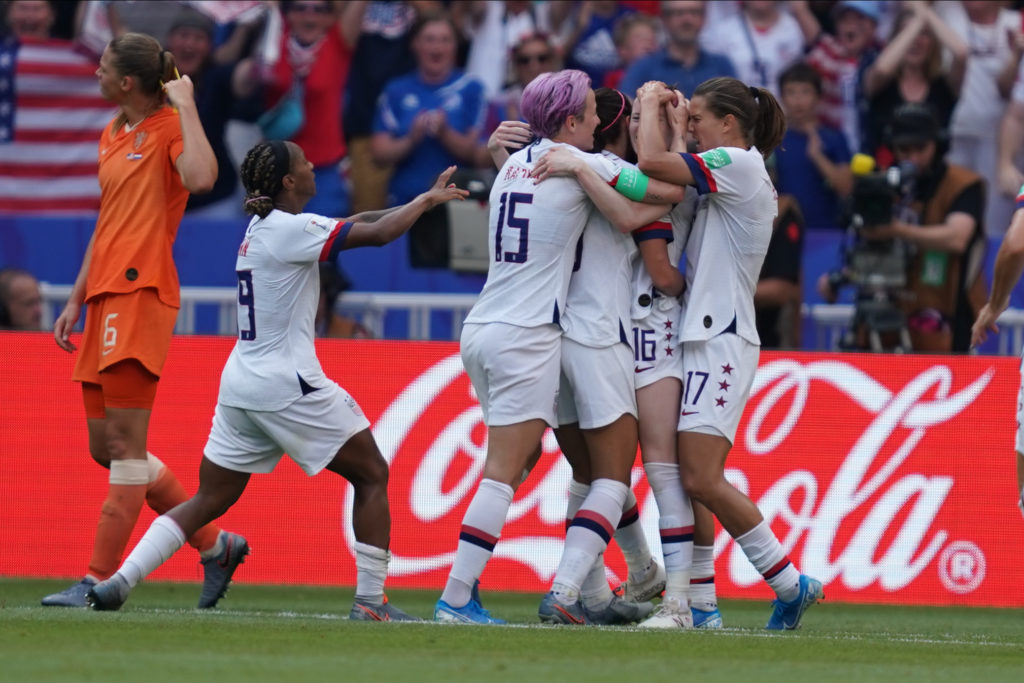 LYON, FRANCE — JULY 07: Players of the USA celebrate Megan Rapinoe's goal from the spot during the 2019 FIFA Women's World Cup France Final match between The United States of America and The Netherlands at Stade de Lyon on July 7, 2019 in Lyon, France. (Photo by Daniela Porcelli/Getty Images)

It all came down to this: one more match. The FIFA World Cup has lasted for a month and now it’s over. The excitement of women’s soccer will — and should — continue to evolve and grow throughout the world. For now, there’s a celebration going on for the U.S. Women’s National Team, after winning their fourth World Cup.

The USWNT achieved this feat with a 2-0 victory over the Netherlands.

In the first half, the Dutch kept the United States off the scoreboard, but not quiet. The United States had four shots on goal, but incredible goalkeeping work from Sari van Veenendaal kept the USWNT off the board. Julie Ertz had the most dangerous chance for the USWNT in the 28th minute. The ball fell to Ertz and she made a diving kick inside the box, but van Veenendaal made a stretching, reaction save.

Megan Rapinoe scores her 50th international goal from the penalty spot and gives USA the lead in the #FIFAWWC final! pic.twitter.com/gjPpYOrcyl

Rose Lavelle also had a shot on goal, as well as Sam Mewis and Alex Morgan.

Lavelle got her chance in the second half, scoring the game-winning goal in the 69th minute. However, initially getting the team on the board was Megan Rapinoe with a penalty kick in the 62nd minute. The penalty was awarded after Stefanie van der Gragt was called for a high-boot foul against Alex Morgan inside the box. After a quick review from VAR, the penalty was awarded to the USWNT.

Lavelle’s goal came in the 69th minute, as she blasted a shot past van Veenendaal. The 24-year-old from Cincinnati scored earlier in the World Cup, with two goals against Thailand.

A beautiful solo effort doubles the @USWNT's lead in the #FIFAWWC final! pic.twitter.com/ToznvQiuxb

Meanwhile, tip your hat to the Netherlands, as they just made their World Cup debut four years ago in Canada. After going out in the Round of 16 in 2015, the Dutch made a World Cup final.

Van Veenendaal is putting on a show! ??

The Netherlands goalkeeper makes another fine save on Morgan, and this #FIFAWWC final is goalless going into halftime. pic.twitter.com/5DDVyVjZQH

Tobin Heath is more than just flair and nutmegs
The world is catching up, but not to the USWNT