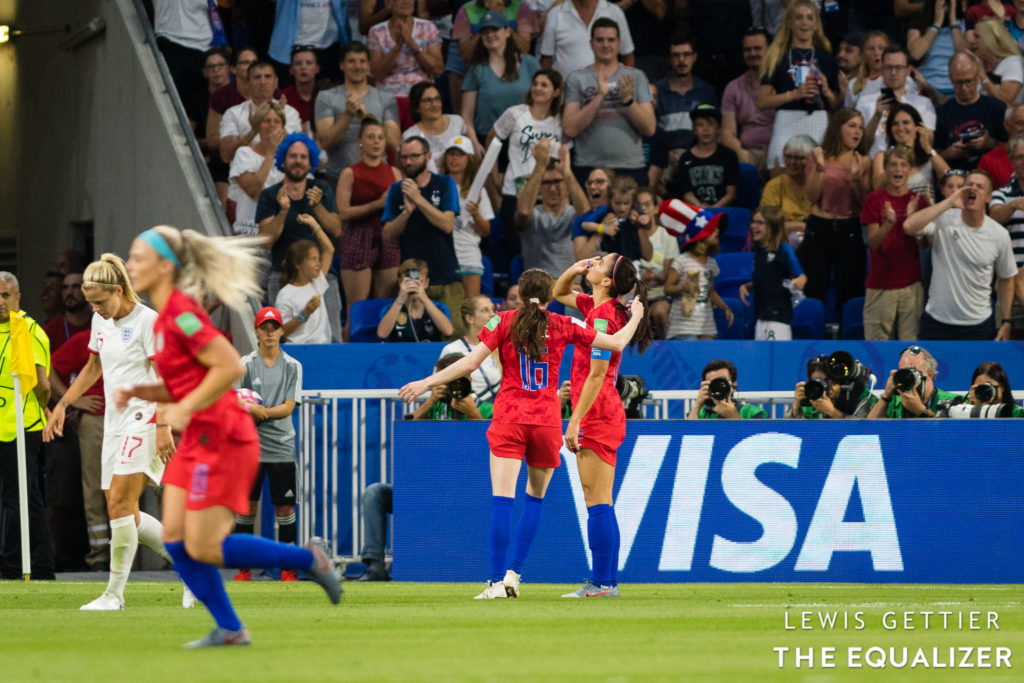 LYON, France – Megan Rapinoe was all smiles on Wednesday, a day after the World Cup semifinal she was forced to watch from the bench due to what has been termed a minor hamstring strain.

“I do expect to be healthy for the final,” Rapinoe said during a brief media availability outside the team hotel in Lyon. “I’m feeling really good. I had a good session today and I’m feeling better every day.”

Rapinoe, who scored all four U.S. goals in knockout wins over Spain and France, said the injury was never serious but that the short turnaround time between matches made it difficult for her to be fully fit in time for Tuesday’s win over England.

“It was just minor to begin with, so every day I’m feeling better and better and increasing the load,” she said.

Rapinoe also took a moment to offer a rare disagreement with a teammate — in this case, Alex Morgan. A day after Morgan said Rapinoe had the best World Cup goal celebration, Rapinoe threw the praise back at her teammate, who pantomimed sipping tea after scoring what stood up as the game-winner against England.

“I think I might have been upstaged,” Rapinoe said. “That was next level. That was pretty sharp by Alex. Maybe we’ll have to do it together and we’ll duke it out.”

Sipping tea — or pretending to — is a common, sarcastic acknowledgement of hearing criticisms but paying no mind to them. ‘That’s none of my business’ is the idea, one made popular by a Kermit the Frog meme.

Answering another question about the voracity of the U.S. celebrations at this World Cup, Rapinoe opened her response with, “Wah wah wah,” signifying that it was just all mostly repetitive white noise.

“We’re at the World Cup — what do you want us to do?” she continued. “This is the biggest stage, the biggest moment. I don’t think anyone truly believes that we disrespect the game or disrespect our opponents. We have the utmost respect for England and every team we have faced and every team that we will face forever and ever. That’s just part of the DNA of this squad. With that said, we work hard, we like to play hard, have fun, and enjoy ourselves. These are the absolute biggest moments.”

Lloyd: That game had everything

Sunday’s World Cup final will be Carli Lloyd’s third. Four years ago this Friday she left an indelible mark on the 2015 championship match with a hat trick against Japan — in the opening 16 minutes of the match.

“We don’t know what’s going to happen,” Lloyd said of the final, speaking a few hours before the identity of the U.S. opponent would be decided. “We’ll be ready. Winning another World Cup is something that I want, and that this whole team wants. We’ll see what happens tonight and we’ll take it from there.”

Lloyd credited England, many of whom she played with and against during a brief stint at Manchester City in 2017, for slugging it out with the U.S. over a tense 90 minutes on Tuesday.

“Last night’s game had everything in it,” she said. “Red card. PK. VAR decisions. You name it, it had it. It was pretty spectacular. I’m just really proud of everybody last night for holding it down.”

Now it’s on to another World Cup final and a chance to join Germany (2003 and 2007) as the only country to win back-to-back Women’s World Cups.

“To be in the last three World Cup finals, it’s pretty unbelievable,” Lloyd said. “Not everybody can say that. Although we know the job hasn’t been done yet. We’ve got to finish it off on Sunday. It’s a testament to this team, this program. Hopefully we put on a show.”

Alyssa Naeher was as stoic as ever on Wednesday, barely 16 hours after her penalty save on Steph Houghton preserved the U.S. win against England. Less spoken about was her full-stretch parry of Keira Walsh’s shot just after the U.S. went ahead 2-1. Naeher offered just a hint of a smile as she acknowledged seeing social media footage of her family smiling in the stands at Parc Olympique Lyonnais.

“Obviously they’ve been with me since the beginning,” the 31-year-old goalkeeper said. “They’ve been a huge part of my journey and every step of the way they’ve been right by my side. Our parents, our loved ones, feel the same emotions that we do. Sometimes even more so because they don’t have the control. They’re up in the stands watching. They get just as excited as we do. We share these moments together which is special.”

She said that seeing the video “just put a smile on my face.”

Naeher said that her parents were with her “on all those little fields back in Connecticut.”

Reaching back to Tuesday night, Naeher said neither she nor the team ever fretted when the referee went for a video review and wound up calling a foul against Becky Sauerbrunn that led to the England penalty kick.

“As soon as I saw they were going to check it with VAR, [I] started preparing that it was going to go in favor of a penalty. Just tried to take a few deep breaths, get my mind right, focus on the ball and what I had to do, and get the best reaction I could.”