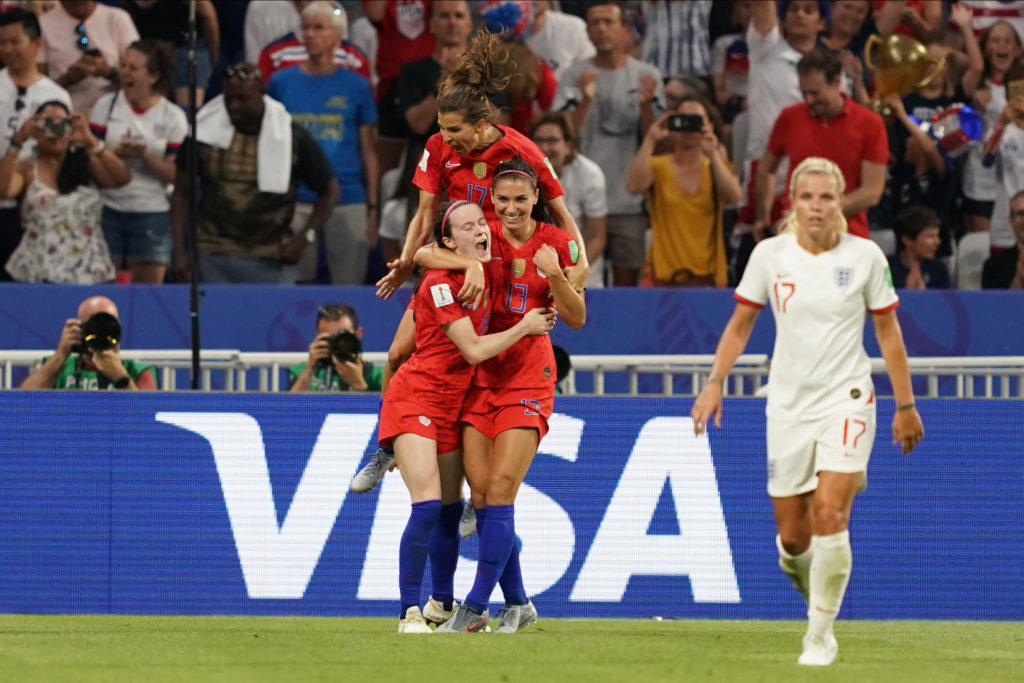 LYON, France – The world keeps closing in and the United States keeps finding a way. The Americans were at it again Tuesday night in a gritty, 2-1 win over England to secure a fifth World Cup final from the eight tournaments to date.

Sure, they got a little help from VAR which rightly called back Ellen White’s would-be equalizer (to 2-2; White equalized to 1-1) for offside. And sure, Steph Houghton could have taken a better penalty after VAR (video assistant referee) ruled against the U.S. in a critical moment less than six minutes from stoppage time.

But the U.S. is still standing. So far in this knockout phase, they have survived a surprisingly difficult tussle with Spain, a full-bore attack from France in a rare evening in which their fans were seemingly outnumbered, and now a toe-to-toe scrap against an England team that had umpteen opportunities to change the match in their favor. Guess who’s still standing?

For Christen Press, a World Cup moment has been a long time coming

No, the U.S. hasn’t won them all, but they do win most of them, certainly more of them than anyone else. Even when the bracket found them stuffed into what Jill Ellis called the toughest road to the final ever in the Women’s World Cup, they just put their heads down and went to work.

“We win in any way possible,” U.S. defender Abby Dahlkemper said. “It is the DNA of this team to win no matter what. We did that tonight.”

To hammer the point home, Dahlkemper said the team huddled during the VAR check and told themselves that no matter what happens, they have faith in Alyssa Naeher making the save (and almost undoubtedly, what would have happened if she had not). When the decision came down, the U.S. players marched dutifully to their positions outside the penalty box and circle, almost seeming to take the news better than the England players.

We should listen to the USWNT, even if they lose

Ellis, who has coached this bunch since 2014 — through a World Cup triumph and an Olympic heartbreak — believes the mentality comes from the intense environment created from within the American team.

“Every day, our players in their training environment are put under pressure,” she said. “It’s uber-competitive. It requires a lot of focus to even survive the environment, the culture that’s probably been around for 20-plus years. So I think players that come into this environment, surviving and being able to push through hardship and compete. I think that’s kind of bred into them because they don’t survive in our environment if they don’t have that internally.”

Julie Ertz is not new to facing penalty kicks in World Cup semifinals. Four years ago, it was her foul that put Germany’s Celia Sasic at the spot with a chance to put the U.S. down. Sasic missed the frame entirely and the U.S. prevailed 2-0.

“We just stayed in it honestly,” Ertz said when asked about the VAR-induced, seven minutes of second-half stoppage time. “We just kept talking throughout that entire seven minutes to keep everyone focused and ready. The defending tonight from the forwards to the midfield to the back line was just phenomenal tonight in the work rate.”

What about the small fact that Megan Rapinoe, the only American player to score in the first two knockout matches, sat the match out with a slight hamstring strain? Or that Rose Lavelle came off hobbling with a hamstring issue of her own? Again, no problem.

“I think the strength of this team is we have a lot of depth,” said Lavelle, who, like Rapinoe, expects to be ready for Sunday’s final. “I don’t really feel like we missed a beat or even really batted an eyelash at that. Pinoe is obviously a great player and we love having her on the field, but we have every confidence that whoever steps in in her place is going to be able to fill that role.”

“Pressy’s been fantastic,” Ellis said. “I’ve said this — I have multiple starters in multiple positions. You guys think of starting lineups, but when we train everyone gets the same information. Everyone gets the same attention and focus from our coaching staff. Because when that moment comes, play like you’re going to make a difference. Pressy did that tonight.”

Defeated English coach Phil Neville has been fast and loose with his praise for both Ellis and the United States. He has not run from the fact that the U.S. are the standard-bearer for the women’s game and that the route to get through them goes through their mentality.

Ellis broke it down more matter-of-factly.

“Finding a way to win is winning. Straight up,” she said. “It doesn’t matter to me how. There’s something to be said for always, always believing you can win. If it takes 94 minutes — w`e were prepared to go 120. We were prepared to go to penalties. We look at the game as, every moment is there to seize to try and get results. Whatever it takes has kind of been the mindset of this team.”

“It’s the mentality of this team,” Lavelle said. “I just think we’re never going to give up and we know we have to fight to the end. We don’t ever take for granted the opponent that we’re playing.”

Ellis also made it clear that her team is in France for one reason only — to win the World Cup. There is one more opponent left, either Netherlands or Sweden. Ellis was asked who she preferred. She gave the cliché answer of: “I don’t care.” Somehow though, she seems to mean it more than most.

“We’ll take whatever gets thrown our way,” Ertz said.

For Christen Press, a World Cup moment has been a long time coming
Déjà vu for England in another World Cup semifinal loss