Another win for the Americans 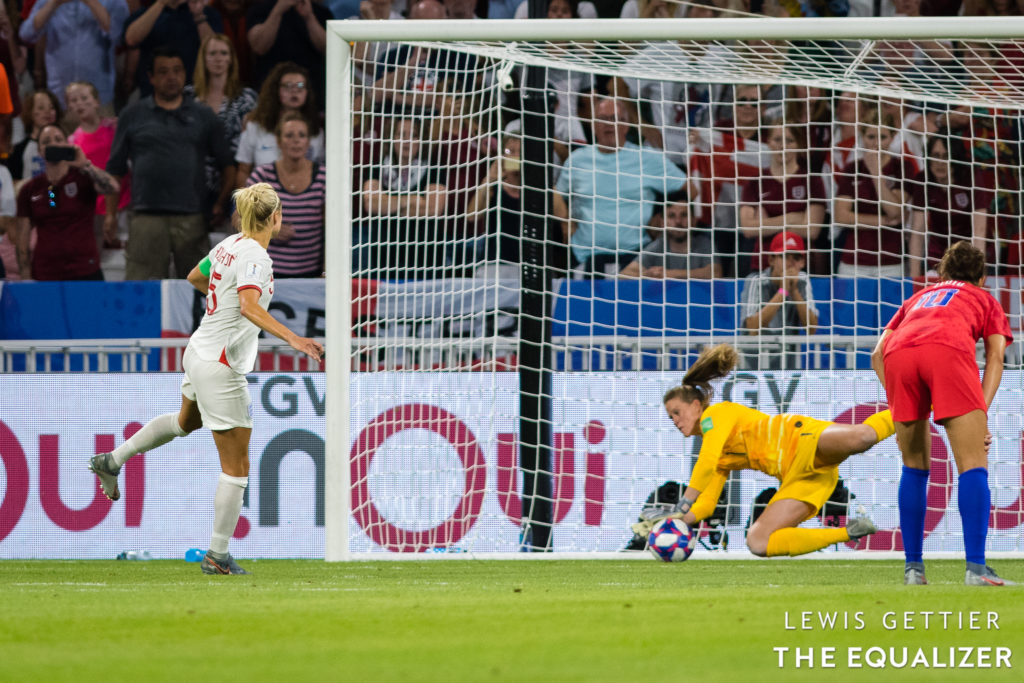 LYON, France – Four days after and a few hundred miles south of that deafening crowd at the Parc des Princes in Paris, the United States women’s national team found itself embattled in another tense knockout stage game with a raucous, bi-partisan crowd. The Americans once again found themselves weathering a storm.

Megan Rapinoe remained in the spotlight just like she has been over the past two weeks – but not for anything that she did in the much-anticipated matchup on the flank with Lucy Bronze. Instead, Rapinoe stood on the side of warmups and watched her teammates stretch, just like the other 50,000-plus people in the stadium. She revealed after the match that she had a “minor” hamstring issue and said she should be fine for the final, which the U.S. advanced to following a tense, dramatic 2-1 victory over England on Tuesday.

Still, Rapinoe delivered the team talk just seconds before the opening whistle, her pink-purple hair standing out in the blob of bright red jerseys. She wouldn’t take part in this penultimate act of the circus, but the other protagonists came to play. Ellen White scored for England and Alex Morgan for the U.S., moving each player to a tournament-leading six goals. Rapinoe would have to remain on five.

It was Rapinoe’s replacement, Christen Press, who opened the scoring 10 minutes into the match with a brilliant header. Bronze was part of that head-to-head, and she lost the early battle, losing Press at the back post on the play.

The goal could have taken the air out of the match early, and it looked like it could be a long night for England in their most important match to date. It’s true that the Lionesses found themselves in the semifinals for the second straight World Cup, but 2015 wasn’t all that expected of an appearance. Four years later, England consider themselves among the world’s elite, one of a handful of teams with realistic ambitions of taking home the trophy.

But England – this new, ambitious, more confident England – responded immediately. Beth Mead found space on England’s left side, and played a deliciously weighted ball behind U.S. defender Abby Dahlkemper and into the stride of Ellen White, whose awkward but effective finish off the far post was the kind of shooter’s bounce that an in-form scorer gets. White, for a moment, went alone atop the tournament scoring chart with six goals. 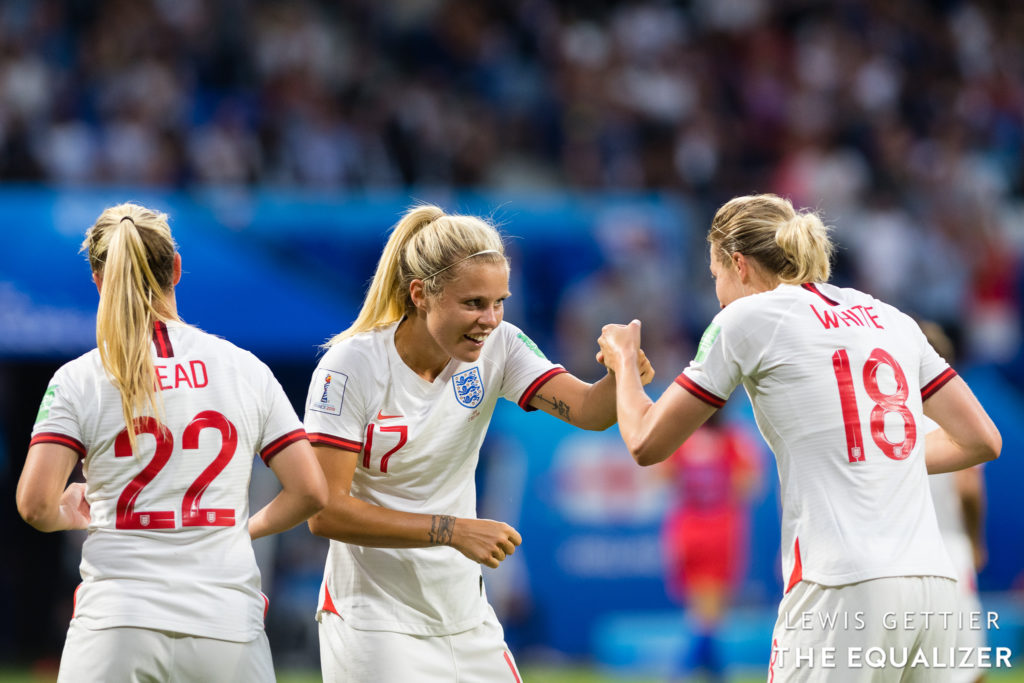 England fans, despite an obvious disadvantage in sheer numbers – an estimated 20,000-plus Americans were said to have traveled to Lyon – were loud, drowning out their American counterparts throughout portions of the first half with an ensemble of drums, trumpets and a hearty section of voices behind Carly Telford’s goal.

This wasn’t going to be a rout, just in case there were any doubts.

Morgan, on her 30th birthday, restored the Americans’ lead and joined White atop the scoring charts via a gliding header in the 31st minute. It was Morgan’s first goal since the 13-0 drubbing of Thailand in the Americans’ opener – when she scored a record-tying five goals in one match – and she celebrated like a player well aware of the narrative around her so-called drought, pointing her pinky in the air and sipping an imaginary cup of what one can only imagine was English tea.

Alyssa Naeher made a brilliant, finger-tip save on Kiera Walsh’s shot just a few minutes later, and it was clear that England weren’t going away quietly. White led that charge, seemingly scoring again in the 67th minute only to have her goal ruled out by video review.

But video review came to White’s aid in the final minutes after she was clipped in the box by Becky Sauerbrunn. Replays showed Sauerbrunn ever so slightly made contact with the swinging right leg of White, who missed the ball and dropped to the ground. Carli Lloyd, entering the match for Tobin Heath, may just have allowed the video assistant referees to take a longer look at the play, and after a look at the monitor, referee Edina Alves Barista slowly – as if to add to the drama – pointed to the spot. England PK. Equalizer looming.

Steph Houghton stepped up as the tension of extra time loomed. The Americans were bending again, just as they had for so much of the second half against France in the quarterfinal. Houghton’s penalty kick, however, was a tame one, and Naeher dove to her right to save the ball, holding on tight like the Americans would until the final whistle.

Just as they did against France, U.S. players rushed over to Naeher, once again the quiet hero of a team surrounded by so much noise. 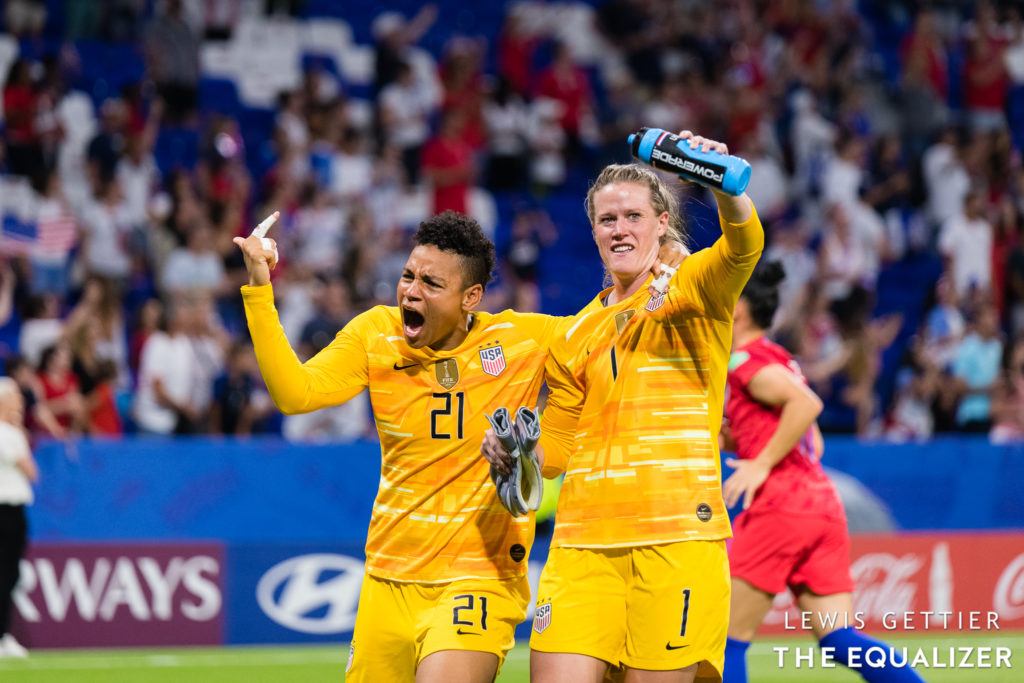 Postgame, England manager Phil Neville said he was prepared for a boxing match – two titans trading blows. He thought the game might end 4-4, given the 2-2 result the teams played to earlier in the year and the offensive-minded nature of each side.

On Tuesday, the Americans once again were the title-holders clutching to their belts. The savvy veterans killed off another match through experience game management, and they are headed to their third straight World Cup final. They’ve endured plenty of blows in this knockout round – physically against Spain and mentally against France – and they might just enter Sunday’s game against either Sweden or Netherlands with multiple injuries (Rose Lavelle exited the match with a hamstring injury but said she was “fine” after the match).

Tuesday felt a lot like Friday: An experienced U.S. team, despite a host of scary moments, never looked like they were too on the ropes. Credit the players. Credit the coaching. Credit the pro-U.S. crowd. It was an 11th straight win in World Cup matches for the U.S. They found a way again.

Hamstring kept Rapinoe out, PK could have brought her in
For Christen Press, a World Cup moment has been a long time coming