Phil Neville: ‘Nobody cares who loses in the semifinals’ 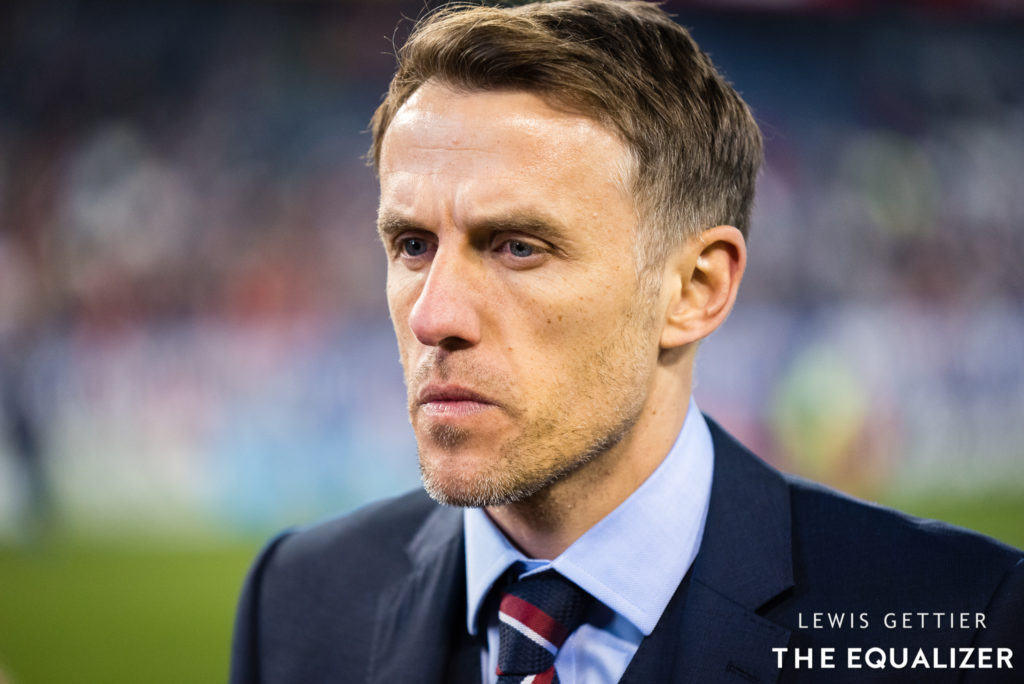 Friday night at the Parc des Princes, the United States defeated France in a much-hyped World Cup quarterfinal that, taken out of context, looked like a very close match. And it was a close match inasmuch as France had their foot on the accelerator for much of the time they were down a single goal, and had nearly all of the possession and chances after halftime.

But it was France. And the history of the French women’s team is one that includes many memorable and agonizing losses either from positions of strength or after matches where it appeared they were superior everywhere besides the scoreboard. It’s what led Eugenie Le Sommer to tell Jonathan Tannenwald of ProSoccerUSA that: “In games in real competitions like this, they’re still ahead of us.”

Enter England. The Lionesses have been inching their way up the pecking order of women’s national teams for a decade or more. And they too were once France. Eight years ago in a World Cup quarterfinal in Leverkusen — against France of all teams — the English surrendered a late equalizer and wound up in penalty kicks. Head coach Hope Powell searched her huddle for volunteers to take a kick and saw no hands go up. France won the shootout (and then lost to the U.S. in what is so far their only World Cup semifinal).

Powell was replaced by Mark Sampson and now Phil Neville and today’s English squad is rife with not only confidence but composure. In 2017 they stole a late goal to defeat the United States in the SheBelieves Cup in conditions better suited to the Iditarod than to soccer. In this year’s SheBelieves Cup, England rallied to beat Brazil, worked out a hard-fought 2-2 draw against the United States after going down early, and then thumped Brazil to take the trophy.

Of course, the SheBelieves Cup is a far cry from the World Cup. After England’s win over the U.S. in 2017, France incinerated the U.S. so badly that the Americans never returned to the formation used at the event. But in reaching the semifinals of this World Cup, it marks the third consecutive major tournament for England to do so.

Two years ago, in the Netherlands they were probably the favorites to win the Euros after Germany went out in the quarterfinals, and they may have played a bit tight against a free-flowing host side that looked destined to win it. Two years before that, England put the World Cup hosts Canada out in the quarters and it looked like they would carry momentum into extra time against Japan in the semifinals before the harshest of own goals put them out of the tournament. Three days later, with Laura Bassett starting after being given the option to sit out following the own goal, England held Germany scoreless for 120 minutes to claim third place.

“We want to play a certain style,” Neville, coaching in his first major tournament, said on Sunday. “And that is our aim, to go out and play a World Cup semifinal with the freedom, the expression that we’ve played the last five games.”

If Neville can get his team to play just that way, they will certainly have a chance against the rightfully favored United States. Make no mistake, though. The United States may be favored, but a third straight exit for England at this stage would go down hard, as would the subsequent trip to Nice for another third-place match.

“You go to tournaments to win,” Neville said. “Nobody cares who loses in the semifinals. It’s all about winning. And my players now want to win. If we don’t get the right result, we will feel the disappointment. We’ll see that as a failure. That’s not me being negative. That’s just our expectations and our belief and our confidence now — is about winning. Sport is about winning.

“I’ve got to say, America have got that ruthless streak of wanting to win. You saw that last five minutes against France; the game management was fantastic. They knew what it took to win, and they celebrated like winners. That’s what I admire and that’s what my team have got now.”

Tactically, if the match is not decided by the Megan Rapinoe-Lucy Bronze match-up on the right side of the England defense, will still likely be worth the price of admission. Neville believes Bronze is the best player in the world and is relishing the match-up with Rapinoe, the only U.S. player to score in the two knockout games.

“We’ve seen a layer that has really developed a lot over the last 18 months. Even though she plays at fullback and sometimes doesn’t score goals –even though she did the other night — I still think that needs recognizing.”

On the match-up, Neville added: “If you think about the lefthand side of the USA and the righthand side of England I don’t think you’ll get many better left and right handed sides in women’s football. We want to play against the best players. There’s brilliant players all over the pitch.”

But when it comes to Bronze, perhaps her best quality is the one that all of England is hoping will be the difference. The difference France could not and has not ever been able to figure out.

“Her ability to step up at the big occasion.”