‘Le Grand Match’ is won, but the U.S. women’s national team is moving on 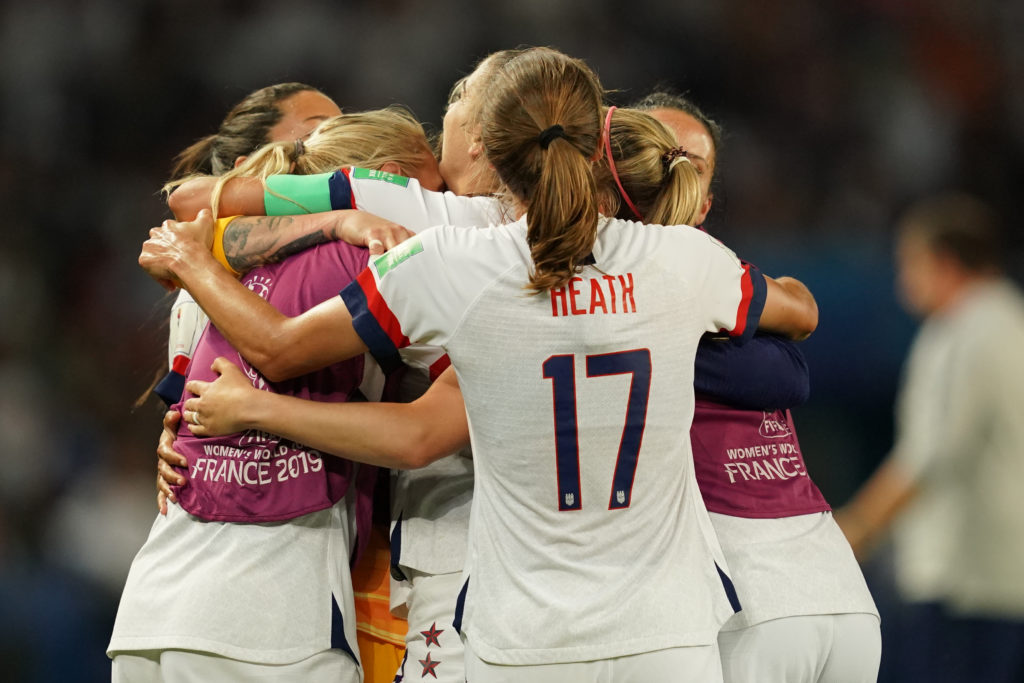 In the 122nd minute of that match, with the U.S. trailing Brazil, 2-1, Rapinoe served a 40-plus yard cross from the left wing toward the back post, a hit-and-hope in the most desperate of times for the Americans. The U.S. had never failed to make semifinal in a Women’s World Cup.

Abby Wambach famously headed that ball into the net to tie the match, and the U.S. defeated Brazil in penalty kicks to complete the most incredible comeback the Women’s World Cup had seen. Wambach’s goal awoke casual U.S. fans, sparking an interest in the team that hadn’t been seen since its 1999 triumph on home soil. Wambach and her teammates were instant heroes.

But in the grand scheme of the World Cup, they hadn’t won anything yet.

“I think because of the Brazil game – the quarterfinal – that people thought we won the World Cup, because that one game kind of encompassed and defined the World Cup for us,” all-time leading international goal-scorer Abby Wambach told me last year, for the book, “The Making of the Women’s World Cup.”

Then-U.S. head coach Pia Sundhage knew she needed to address the emotion among the team. Her players had experienced one of the most incredible moments of their professional playing careers – and now they had less than 72 hours until they needed to play France in the semifinal.

Sundhage gathered the team in their hotel lobby the next morning for a mental reset. Each player shared her feelings and personal experience – the text messages from family members, the headlines they had read, their view of that goal. Rapinoe remembers Sundhage’s words clearly:

“OK, that game is behind us. Now, we move forward.”

The U.S. is back in the semifinals, the only team to reach that stage of all eight Women’s World Cups. U.S. players just played in a quarterfinal which was, similarly, emotionally and mentally draining. Friday’s 2-1 victory over France was a different kind historical feat – less last-gasp drama, more pre-match hype and in-game hostility from a predominantly French crowd.

It was the USA-France clash which people – players included – waited six months for. Co-favorites colliding. The world’s top team against the hosts. There were Megan Rapinoe’s “not-going-to-the-f***ing-White-House” and “s***show circus” comments. This was the quarterfinal that was more like a final – or, as it was described locally, “Le Grand Match.”

There’s an emotional baggage that comes with winning a game like that. Defeating France was seen as the big hurdle for the Americans on their quest to win a second straight World Cup. But a loss to England on Tuesday, or to Sweden or the Netherlands in the final, would mostly render irrelevant Friday’s quarterfinal victory over France. As Herb Brooks famously told his 1980 Olympic men’s hockey team, nobody would remember their historic upset of the Soviet Union if they didn’t go finish the job and defeat Finland for the gold medal.

“Luckily, we’ve been in this position before,” said veteran U.S. defender Ali Krieger, a starter in 2011 and 2015 and a reserve at this 2019 World Cup. “It is really mentally, physically, emotionally draining, this tournament. So, you have to really kind of take a step back, take a break, put the phones away. Say hi to your families quick, and then get back to refreshing, recovering and getting your body back to 100 percent for three days from now. It’s tough, but luckily we’re immune to that, I think.

“We’re very, very good at it, and that’s what we’ve been training for the past four years – and even some of us beyond. We’re used to it, we’re comfortable doing it and we’re prepared to do it. We’ve done this multiple times before. Every single tournament, we kind of focus on this. Before we came into this month-long journey, we obviously trained our minds mentally, emotionally, physically – and bodies – to prepare for these moments.”

For Extra Subscribers: Alex Morgan is not the player you think she is

U.S. defender Becky Sauerbrunn had one of the most unique experiences in that 2011 knockout stage. She watched that quarterfinal from the bench but had to prepare herself to start her first World Cup match in that semifinal against France, due to Rachel Buehler being red-carded against Brazil.

Now a veteran and a starter in her third World Cup, Sauerbrunn is conditioned to deal with the highs and the lows.

“I think, really, it’s just you stick with your routine that got you here,” she said Friday. “It’s just closing this game out and just prepping for the next one. We have a routine that we go through every day.”

U.S. coach Jill Ellis echoed that after Friday’s victory. She also reminded everyone that, as has been the case throughout this World Cup – since the U.S. played the last group-stage opener of the entire tournament – her team will have one less day of rest than England when they meet in their semifinal on Tuesday.

Chaos is normal for this U.S. team – as is managing the latter stages of the tournament. The program has the resources to make sure that, despite the ebb and flow and quick turnarounds, everything feels as close to normal as possible, including investments like having a private team chef.

Ellis said she would go through preparations for the semifinal against England in the same way she prepares players for every match. But first, she wanted to let her players enjoy the victory.

“It started in the huddle at the end,” Ellis said on Friday. “As much as we were celebrating this win, I just reminded them that they are just getting warmed up. That was the early message. You’ve got to let players enjoy this moment tonight; I think that was a gritty win for us.”

Ellis’ tactical gamble worked. Was it inspired coaching, or good luck?
A smorgasbord of success for Sweden