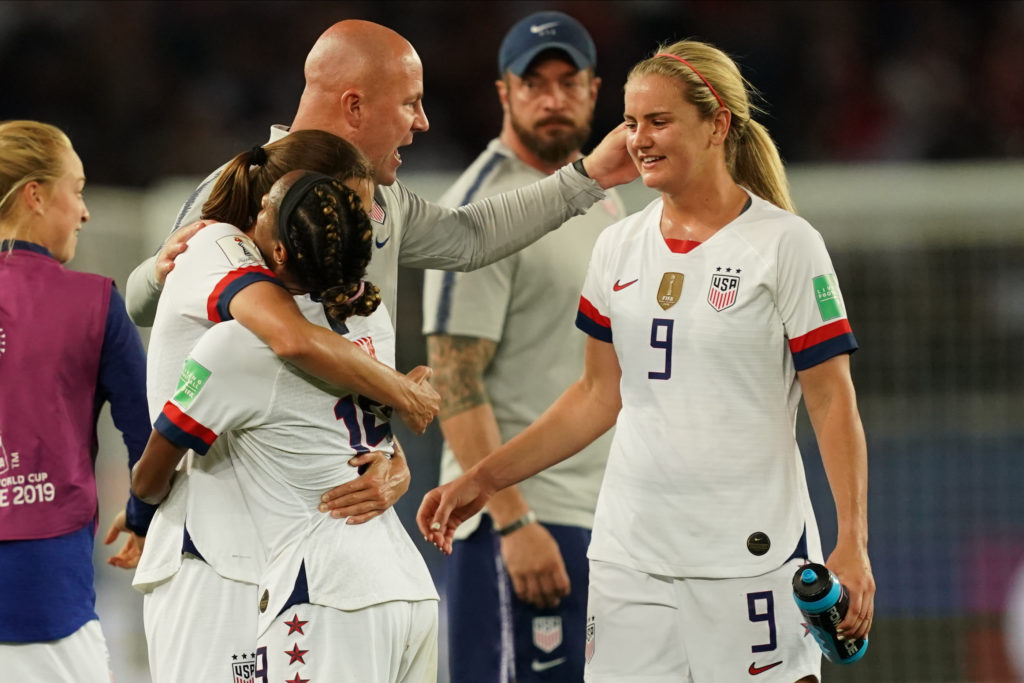 For the past three years, the United States women’s national team has had one singular tactical focus — to find a way to break down teams that bunker in a low block.

Yet, on Friday, it was the Americans employing a defensive strategy to advance to the World Cup semifinals. They sat low in a 5-4-1 formation for the final 30 minutes to prevail with a 2-1 win over France.

From the start, U.S. head coach Jill Ellis’ game plan proved adventurous, both with her decision to bench Lindsey Horan — arguably the U.S.’ best midfielder — and in deciding to go toe-to-toe with France from the opening whistle.

However, the gamble worked. Megan Rapinoe established an early lead via a free kick in just the 5th minute of play. Rapinoe fired a shot hard and low, managing to slide it through a mess of onrushing attackers and defenders and past French goalkeeper Sarah Bouhaddi, who haplessly threw a foot out in a failed, last-ditch attempt to stop the ball.

It was the perfect start for the U.S., but France fought back quickly and through much of the first half dominated possession and the match. Only a brilliant defensive recovery from Becky Sauerbrunn saved an exposed American side in the 16th minute and through most of the first 45 minutes of play — and most of the second 45 as well — as the French wingers spun the U.S. outside backs in circles.

Things didn’t go much better to open the second stanza, with the Americans unable to convincingly clear their lines and gifting the French repeated second chances on goal. Le Sommer then turned Dahlkemper badly just six minutes into the half and, in the 57th minute, had a chance on goal while American goalkeeper Alyssa Naeher laid on the goal line after a missed attempt to push away a cross.

Le Sommer missed, firing into the side netting, but only 60 seconds later, the U.S. back line broke again, this time with Kadidiatou Diani getting in behind.

With the U.S. in a full-blown emergency and defending through sheer desperation — to say nothing of a raucous French crowd firmly behind the home side — Ellis decided to drop the U.S. into a shell and move the team into a 5-4-1.

“I think the coaching staff thought that the momentum was shifting a little bit into France’s favor and so they wanted to make it a little bit more difficult for them,” said Sauerbrunn, in response to a question from The Equalizer. “Adding more people into the back line, you’re allowed to spread out a little bit more and take away more of their flank space. She’s was hoping that was going to make it even harder for them to break us down.”

In and of itself, the call to try and fend off a dynamic and inspired French attack for 30 minutes in a bunker, while only holding a 1-0 lead against the co-favorites, was another gamble. However, Ellis credited her players for getting the job done.

“We’ve trained a five-back,” she said in the post-game press conference. “We’ve actually shown a five-back in many games to be ready for moments like this. We knew the intensity of the fans behind that team — it’s an incredible team and then you add to that the surge of momentum from the fans. At times, it felt a little bit like a tsunami.”

“To have flexibility and to know what card to play at what particular moment — I credit the players,” she added. “We’ve trained them hard and we’ve given them a lot of information over the past 15 months. They’ve taken it on.”

The change itself did not produce a shift in the momentum — with France putting two good services into the area in the next five minutes — but it didn’t end up mattering. In the 65th minute, Kelley O’Hara launched a long clearance out of pressure and Alex Morgan slid over on a diagonal run to win possession. She then combined with Tobin Heath and set the winger in behind. Heath played the ball across the face of net and Rapinoe finished the chance to put the U.S. up 2-0.

But even with a two-goal lead in the 65th minute, the feeling persisted that the U.S. had decided to bunker too early. The French continued to dominate the proceedings. Alyssa Naeher tipped an attempt over the bar in the 79th minute and finally Wendie Renard got one back for the French only a minute after that.

With the score now 2-1, the desperate defending continued as the U.S. struggled to hold the ball for any length of time. On the night, the French out-shot the Americans 20-10, out-possessed them 60%-40%, had a pass accuracy of 79 percent, compared to 66 percent for the U.S., and completed 475 passes compared to the Americans’ 302.

Things could have really unraveled in the 86th minute, when a French cross hit the arm of Kelley O’Hara inside the box. The non-call was the correct one according to the commonly used ball-to-hand interpretation of the laws of the game, but it’s also a situation that has frequently been called a penalty throughout this tournament.

After the match, Rose Lavelle, Julie Ertz, Sauerbrunn, Naeher and Ellis all stated that they had prepped the five-back system in training. Naeher described the transition as “seamless” and Ertz emphasized the U.S.’ comfort level in adjusting on the fly. The midfielder also praised the French side for their attacking verve.

“France had a really good game plan,” said Ertz. “They were coming up in the attack. Hats off to them. I thought they played a great game and we had to defend a lot and that’s what the game gave us.”

French coach Corinne Diacre, however, came away surprised at the U.S.’ tactics.

“I’ve been doing this for awhile and I’ve never seen the U.S switch to a five-man back line before,” she said through a translator.

There’s no shame in bunkering in — despite the protests of those defending “the beautiful game” — especially against a superior opponent. It’s an effective tactic for many sides and one the U.S. can play well using their wealth of attacking talent to strike on the counter. It’s not often necessary, especially in an era when the American system is finally starting to produce world-class possession-oriented midfielders, but against a co-favorite in a heated environment, it can and did work.

The issue is how Ellis deployed the tactic, seemingly from desperation rather than from a well-planned strategy. Any good coach adjusts on the fly and there’s absolutely no doubt that France was on the front foot when the U.S. coach moved the team into a 5-4-1. However, a feeling still lingers that the Americans came out lucky on the night with the result.

A sounder plan might have involved using Horan in the starting XI and going with an Ertz-Mewis-Horan midfield that maximized the U.S.’ physical strength in the middle of the park. Combined with explicit instructions to the midfield and outside backs to largely stay home, keeping seven behind the ball with the front three staying high to strike on the counter would have likely produced a similar result — with far less panic.

In the end, the U.S. gained the result and will play England in the semifinals on Tuesday in Lyon.

As Ellis put it in the postgame press conference, “A win’s a win in the World Cup.”