Will the real Germany please stand up? 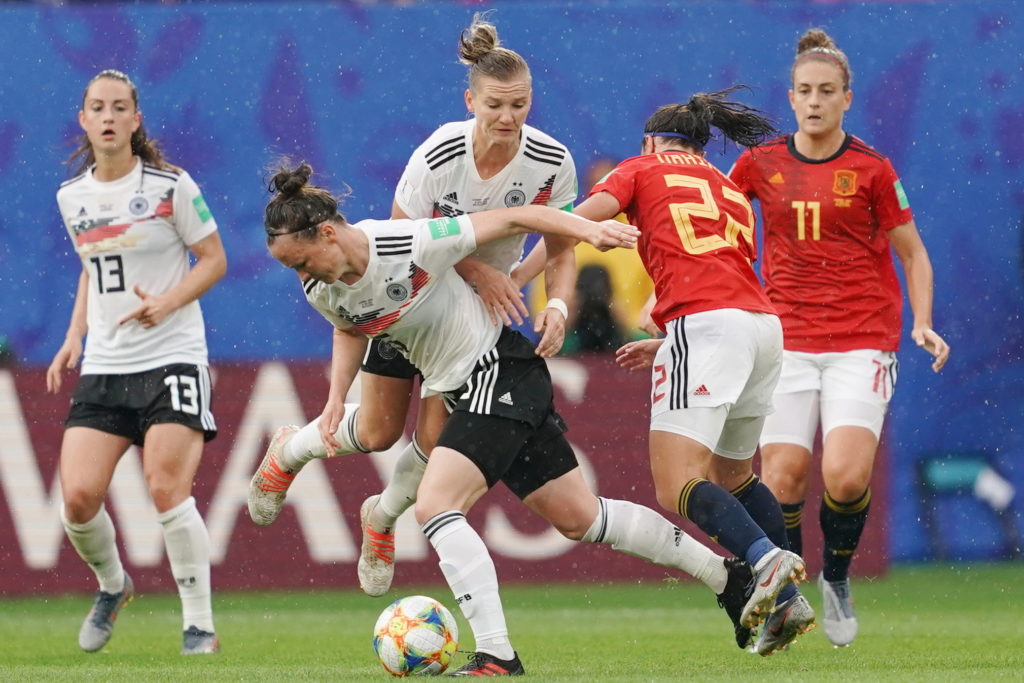 No one could quite believe the scene in front of them. Denmark had taken the lead – and through a Theresa Nielsen header of all things – and managed to hold onto it, letting the clock run down to eliminate the Germans.

It wasn’t in the script; Germany weren’t supposed to be out. This team wasn’t supposed to fall at the first hurdle at Euro 2017. They’d been champions on eight of their nine previous European Championship appearances. Only once before, in 1993, had Germany failed to win the Euros. Although the early format wasn’t representative of the modern tournament, Die Mannschaft had dominated the modern era too. Yet there they were, in their first tournament without Silvia Neid for 12 years and the walls were caving in. From Gero Bisanz to Tina Theune to Neid, no Germany team had failed to claim a Euro crown. Steffi Jones was the first coach in Germany’s history to lose her maiden tournament.

Knives were sharpened and ready to lash before the team had even returned back to Germany. Jones’ stayed the course; the DFB had faith in her, but the results didn’t improve and finally, the clock ran out for the decorated former defender. As well as the Euros, Germany had a serious blot on their record for 2019 World Cup qualification and the team needed a steady hand to stabilize the side and ensure the team didn’t miss the Women’s World Cup for the first time.

It was a time of crisis and the DFB opted to call upon Horst Hrubesch, the move one that immediately paid off. Although Jones had been trying to wean the team off of the more defensive side that Neid had favored, the squad had been left confused and disjointed, under Hrubesch there was clarity. The interim coach was a warm figure away from the pitch (like Jones) but clearly a man who conducted respect from his players – something that was clearly a two-way street.

With Hrubesch at the helm, the team won each of their remaining qualification matches without any slip-ups, ensuring Germany kept their 100 percent record of qualification. The only black mark against the 68-year-old’s short spell was a draw against Spain in his final match. Germany had played eight, won seven, drawn one, scored 29 goals and conceded five.

Although it would have been an intriguing experiment to see how Hrubesch would have fared at the World Cup, he was clear that he was only a short-term solution, as he even joked, he wasn’t sure if his marriage could handle a major tournament. It might not have been another crisis for the DFB, but it was imperative the federation installed the right coach after how things had panned out with Jones.

Another player from Neid’s generation who surpassed 100 caps for Germany over a fine playing career, Martina Voss-Tecklenburg had spent six years overhauling the Swiss national team. Building from the ground up, the attacker promoted a hard and unforgiving style for La Nati. Switzerland reached their first ever World Cup during her stay at the helm.

She was still navigating qualification for France with the Swiss when she was named manager on the German team. With Switzerland advancing to the UEFA playoff final for the last berth for the World Cup (which was ultimately lost to the Netherlands), Voss-Tecklenburg didn’t take charge of her first Germany match until 2019.

Voss-Tecklenburg would have just four matches at the helm before the World Cup. It was a calculated gamble by the DFB and one that should possibly have set off more alarm bells than it did. Unbeaten in nine, France fell to their first defeat at home since 2015 when Germany defeated them in February. Lea Schüller’s lone goal was enough to decide the tie and give Voss-Tecklenburg a victory in her first match as coach. By April, Germany had a new captain in Alex Popp and in front of a record crowd in Stockholm, they made it two from two with a stylish win over the Swedes.

Germany’s third game of the year brought about their first draw as they dominated Japan and let in two unforgivable goals against the former world champions. By the time Germany eased past Chile in Regensburg at the end of May, Voss-Tecklenburg had reminded the world that Germany were a formidable foe and should not be overlooked for the impending World Cup.

Going into the World Cup unbeaten in 12, many expected Germany to announce themselves in dominant fashion, blowing their group opposition out of the water. Yet, it’s been a tepid affair so far. Or rather, it’s been a lucky affair.

Germany rode their luck against a surprisingly lively China before picking up all three points by way of a Giulia Gwinn thunderstrike. Not the better team against Spain, again, Germany rode their luck and benefited from La Roja’s lack of end product. The only glimmer of the real Germany was when they played South Africa. The team was already through to the knockout rounds and looked relaxed. Against Nigeria in the round of 16, Germany benefited from video reviews but, like so many other teams in France, have flattered to deceive.

Yet, if there is one team that can turn it on at the drop of a hat and just run riot, it’s Germany. The team has a razor-sharp mentality and players who know how to get the job done, from Dzsenifer Marozsán to Sara Däbritz and Alex Popp. The ideals Voss-Tecklenburg has preached are those of an attacking team and should she get the personnel right, Germany will be afforded more than a few mistakes at the back. However, as of yet, we’re yet to see that fiery Germany team really come out and play in France.