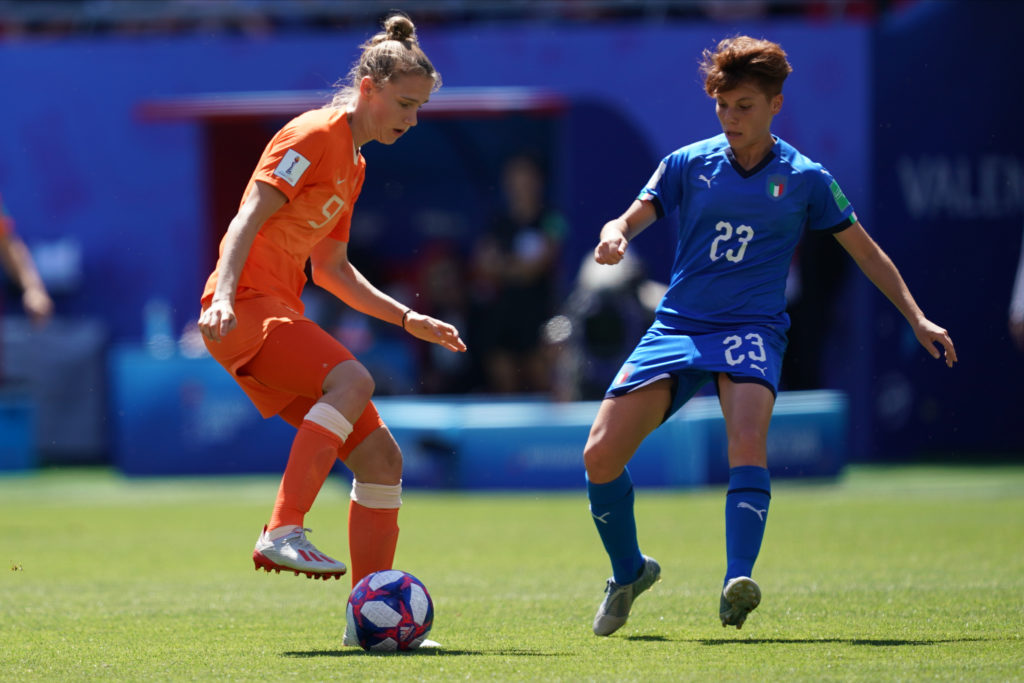 Nobody knew what to expect from Italy — except the Italians. With a new wave of women’s soccer progression in their country, Italy stepped up at the World Cup, winning their group. It was their first time back at the tournament since 1991, when they finished in the group stage. While Italy’s World Cup journey is over after a loss to the Netherlands, there’s a lot to be proud of — and a lot to grow from.

Meanwhile, the Netherlands have the present and future on their team in Vivianne Miedema. Currently, she’s the highest scorer in Dutch Women’s National Team history. However, she’s only 22-years-old and that goal number is going nowhere but up. While Lieke Martens is the household name and face of the Dutch team, Miedema is right up there, too.

Can't give Miedema too many chances!

Miedema scored the opening goal after a first half of scoreless action in the blazing heat. Her goal occurred off a header, while Sherida Spitse provided a picture-perfect assist inside the box.

However, Miedema didn’t find the game winner. Instead, that went to centerback Stefanie van der Gragt. On a set piece play, van der Gragt found another header and sent it past Italian goalkeeper Laura Giuliani.

Up next for the Dutch is a contest between the winner of Germany vs. Sweden in the semifinals. This is the Dutch’s first trip to the semifinals, as their World Cup debut in 2015 saw them finish in the Round of 16. Netherlands will feature in the semifinals on Wednesday at 3 p.m. EST.

IT'S TWO! Another set piece header, and this time it's van der Gragt who doubles the Netherlands' lead with 10 minutes to play. #FIFAWWC pic.twitter.com/9UJ1vNXmLX

Germany struck early, but couldn’t hang on when the pressure of Sweden came crashing in the Quarterfinals. Germany saw the return to Dzsenifer Marozsán, who was out for the last three matches with a broken toe. However, Sweden was able to shock Germany with a 2-1 victory.

Lina Magull scored the first goal of the match — which was also Germany’s only goal. Magull found the the ball in the box, but her first touch lifted the ball in the air. That was no problem for Magull, as she did a sideways bicycle kick to send the ball past Swedish goalkeeper Hedvig Lindahl.

Lina Magull gives Germany the lead on the half volley, after a great assist from Sara Däbritz. 1-0 ?? #FIFAWWC pic.twitter.com/bm3S36dmy1

It didn’t take long for the Swedes to respond. Six minutes after Magull brought Germany up, Sofia Jakobsson equalized. Jakobsson beat out both of her defenders and slipped the ball past Almuth Schult. In the second half, the chapter closed for Germany as Stina Blackstenius grabbed the game-winning goal in the 48th minute.

Now, Sweden will go on to face the Netherlands on Wednesday.

The immediate answer from Sweden! ??

A long ball over the top finds Jakobsson, who slots it past Schult and ties the game. That's Germany's first goal allowed at this #FIFAWWC pic.twitter.com/QKY4MWOubd

Blackstenius scores just 2 minutes into the 2nd half! #FIFAWWC pic.twitter.com/dd0DyWVt59

Will the real Germany please stand up?
Ellis’ tactical gamble worked. Was it inspired coaching, or good luck?