A more diverse USWNT — and a long way to go 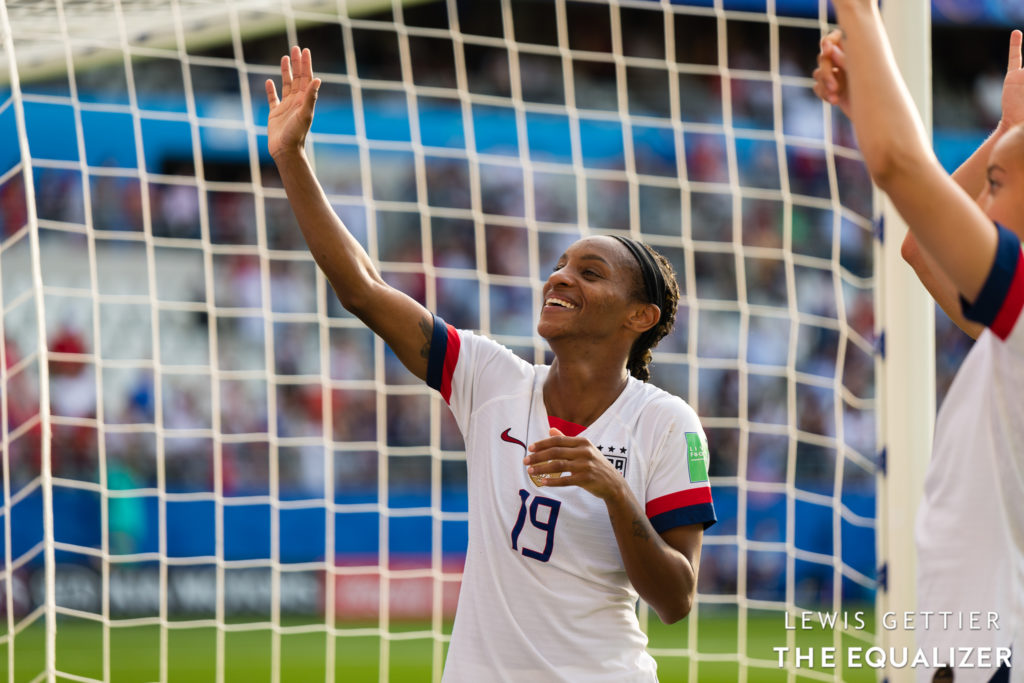 Twenty-three players are on the United States women’s national team‘s World Cup roster as they seek to earn a fourth FIFA World Cup championship for the program. Five of those players are women of color.

“I think that’s a huge thing for us, because there’s so many more of us on the team right now,” U.S. forward Jessica McDonald said prior to the tournament. “I mean, me, Mallory Pugh, Christen Press, Crystal Dunn, Adrianna Franch. That’s an incredible group of black women on the team.”

Alongside teams like Jamaica, Cameroon, South Africa, and Nigeria qualifying in 2019, these five American women are helping to diversify the world’s most popular sport. Five women of color on the team is unprecedented — and it didn’t happen overnight.

“To go from just Briana Scurry, and I think Angela Hucles … hopefully that inspires more of the African American community,” shared McDonald.

Scurry and Hucles were once on the national team. So too were Stepanie Cox, Natasha Kai, Shannon Boxx, Thori Staples (Bryan), Staci Wilson, Lorrie Fair, Saskia Webber, Tina Ellertson, Danielle Slaton, and Sydney Leroux. All of these women have played at either the Olympics or World Cup. However, none of them was the first player of color to represent the United States.

“I think every player would agree that this amazing platform, these camps, offer a chance to leave it all on the field in hopes of representing the United States,” said Crabbe in a 2018 interview with U.S. Soccer. She added: “It comes as no surprise to see more women of color representing their country through this era of soccer.”

Scurry is likely the most recognizable black player to wear the U.S. crest. In 1999 World Cup final, she stomped with pure passion and adrenaline after stopping a penalty kick, setting up the Brandi Chastain goal and famous, shirtless celebration.

Now, players like Dunn hope to create new memories for fans, especially the ones who see themselves in the variety of brown tones, hair styles and textures represented on the 2019 World Cup team.

“Obviously, Brandi Chastain’s moment just raised so much awareness for the game,” Dunn said in late May. “But you know, how cool would it be if that was a black woman, a black player, you know? And I think that is really ultimately what I think could happen this World Cup.”

In a lot of ways, the U.S. women’s national team has embraced its platforms as change agents. Whether on the pitch, where they have been ranked first in the world 10 of the last 11 years, or as they fight against gender discrimination in their latest lawsuit against the U.S. Soccer Federation, the national team has a platform.

Megan Rapinoe has been a leading figure in the battle for equality, taking center stage again this week ahead of the U.S.’ quarterfinal against France. Rapinoe, who has publicly protested social injustices for the past three years, spoke in a prerecorded video — which was released this week — about refusing to go to the White House if the Americans win the World Cup. President Donald Trump responded, and Rapinoe said Thursday that she stands by her comments.

If you ask Christen Press, talking about race and racism has not always been central to the fabric of the more general equality conversations. “I think that that’s so important,” Press told The Equalizer. “And it’s probably the part of equality that we don’t talk about enough. I think there’s been a lot of attention on this team for gender equality. And there is no future of gender equality without the future of racial equality.”

Neither Press, McDonald, nor Dunn – nor their teammates for that matter – can directly impact the amount of players of color invited to national team camps or selected for U.S. Soccer rosters. Part of that has to come from the developmental parts of the game. While girls soccer continues to grow, players of color are not often represented in the growth statistics.

“There are tons of cultures, and races, and people that are not represented on our team. And that’s something that’s not in our control,” Press said. “But we [can] do [more] speaking out about it and then hopefully investing in the types of grassroots programs that can actually provide opportunities to make it fair,” she added.

The black players on the team now hope as they represent the national team more consistently and in greater numbers, young players of color will see themselves in the game.

“To be able to be in a position to help relate to others that are fighting is a unique feeling, and an honor, and an opportunity,” Franch said. “Not seeing someone in a successful space is hard when you’re wanting to get there.”

The goalkeeper from Salinas, Kansas, is excited for this roster to reach further than any national team before and truly embody what it means to represent an entire country.

“We’re reaching a whole different magnitude of people,” Franch said. “The youth, men, women, boys, girls. That’s part of what the crest is about, we’re representing all of those people and hopefully we can continue to inspire.”

USA-France in the quarterfinal of the ages: Five things to watch
Day 19: Megan Rapinoe is the USWNT’s hero in win over France