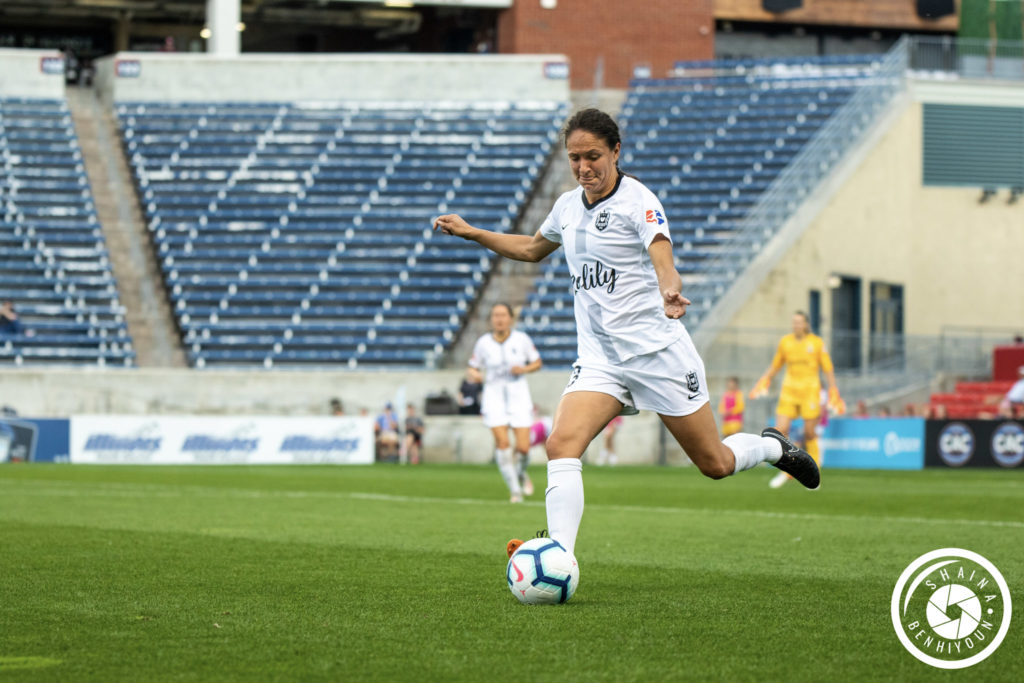 With the 2019 World Cup raging, the story of the NWSL has been one of survival. Teams have been stealing points off one another, new players have been getting opportunities on the pitch, and icons of the game are returning.

On May 31, Reign FC announced that they had signed Stephanie Cox (Neé Lopez) as a National Team Replacement Player. The announcement came as a bit of a pleasant surprise, as Cox has been retired from the professional game for over three years. She has however remained tied to Reign FC as part of their coaching staff as an assistant.

Since then, Cox has been instrumental. She made her second consecutive start for Reign FC last weekend against the Chicago Red Stars, and continued to make an impact for them due to a range of injuries and international absences. In that match, Cox was part of Reign FC’s game winning goal sequence, when she found Ifeoma Onumanu down the flank, who then played Jess Fishlock for the lone goal and ultimately the victory.

NWSL news: Denise Reddy is out at Sky Blue

After the game, Reign FC head coach Vlatko Andonovski said of Cox’s role with the team: “Having Steph back it helps a lot having her experience and ability to be able to play on the back, that allowed us to keep a little bit more possession […] and dictate the pass just a little bit more than the last time we were here. Turns out [she] was crucial for us.”

On her end, Cox is embracing the return as both a challenge and opportunity, but also having fun with her teammates, and she spoke with enthusiasm in post game comments after the win against Chicago.

Experience during a World Cup break within the NWSL season is something that is helping Reign FC fight for points during this portion of the schedule, while simultaneously putting them in a better position on the table and building their team for the future.

“It’s our job to make sure that the kids enjoy themselves and they learn, but in the right way and an effective way, that’s our job,” said Jess Fishlock after the match.

Fishlock also indicated that she might’ve also played a small role in motivating Cox to make a return from retirement, as someone who could help fill the role of injured players but also lead with crucial experience. And for that, Fishlock has nothing but admiration.

“She’s just phenomenal. You know I came back [from Olympique Lyon] actually, I had one training session, and she was just floating about. And I looked at her and I was like ‘you know we have no players right now – it would be quite fun if you wanted to just suit up’ and I was joking, but the next week she was signed.”

“Steph is great,” Fishlock continued. “For her to come in and just play as well as she’s been playing right now – and I remember Steph from our ‘good ole days’ – and she was phenomenal then, it’s just really fun to have her. It’s experience, that’s what we need right now.”

Although Cox enjoyed retirement, she says the switch back to playing has actually been an easier transition than the initial change to becoming a coach. For some people, whether you’re riding a bike or re-reading a really good book – you just remember the feeling when you pick something up again. For Cox, being so close to the Reign’s playing environment made the decision to jump back in a simple one. 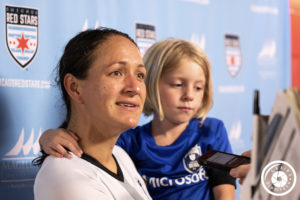 “I mean yeah, it has been awhile, almost three and a half years,” said Cox. “But I think from all of the minutes on the field – it is easy to jump back into the players mentality. Especially because, these girls are my peers. So sometimes the coaching thing was almost a harder switch. I’ve enjoyed the first three months [coaching] but I had too much fun that I just couldn’t pass up the opportunity to play.”

Long time followers of the game and league remember Cox’s career from the mid to late 2000’s, playing for the University of Portland and later in WPS and the NWSL. She also broke barriers internationally as the first ever Mexican-American capped player for U.S. Women’s National Team.

Her inspiring play at left back while donning “Lopez” on the back of her jersey, was a groundbreaking moment for the national team, with whom she won a World Cup Bronze medal in 2007, an Olympic gold medal in 2008, and a World Cup silver medal in 2011.

It’s a time that Cox looks back on fondly and takes pride in, including her previous dominant run with the Seattle Reign from 2013 to 2015. And since her retirement, other Mexican-American women have made efforts to develop their play in the NWSL.

“It’s really exciting to see more Latina players [in NWSL],” said Cox. “To know that I was the first hispanic player on the U.S. team, to really make an impact there, to now – that there’s the opportunity.”

She is hopeful that the league is becoming a place where Latinas in general can see themselves represented and be a place where they can compete at the highest level.

“The more young girls that see players like themselves means the more they can dream and aspire to be.”

Is this the best U.S. women’s national team ever?
NWSL Friday: Reign FC earn three points, but potentially at a cost