PARIS – Rapinoe wanted a circus, and when the spotlight came down on her at the Parc des Princes on Friday, she delivered yet another world-famous act for the crowd.

Rapinoe scored two goals to lift the United States to a 2-1 victory over France in the 2019 Women’s World Cup quarterfinal, emphatically backing up all the talk which surrounded her and her teammates throughout the week.

“It’s the knockout rounds,” Rapinoe said postgame. “You don’t get past it without statement performances. Obviously two goals from me, but what a huge performance from the team.”

Rapinoe has been making statements for years – on and off the field. She first kneeled during the United States national anthem in September 2016, in protest against racial and social injustices in the United States. She has been outspoken about the topics since, and this week, in the buildup to the USA-France quarterfinal dubbed Le Grand Match – ‘The Big Match’ – those messages took on a larger platform than ever.

A viral video – shot in January – which captured Rapinoe saying “I’m not going to the f***ing White House [if the U.S. wins the World Cup}” attracted the ire of President Donald Trump, whose tweets at Rapinoe resurfaced the story to the wider public. It brought the “sh*tshow circus” that Rapinoe said she wanted for this epic quarterfinal, and it put a particular spotlight on her.

She needed just five minutes to score her first goal, smashing a low free kick through traffic – and the legs of French captain Amandine Henry – and into the net to give the U.S. the early advantage. Rapinoe’s celebration was a familiar one – two arms raised, gazing into the distance of the 45,000-plus fans as if she were about to take a bow – but one with added meaning given the context of the evening. The U.S. was on its way to another semifinal, a stage of the World Cup the Americans haven’t missed in now all eight competitions. 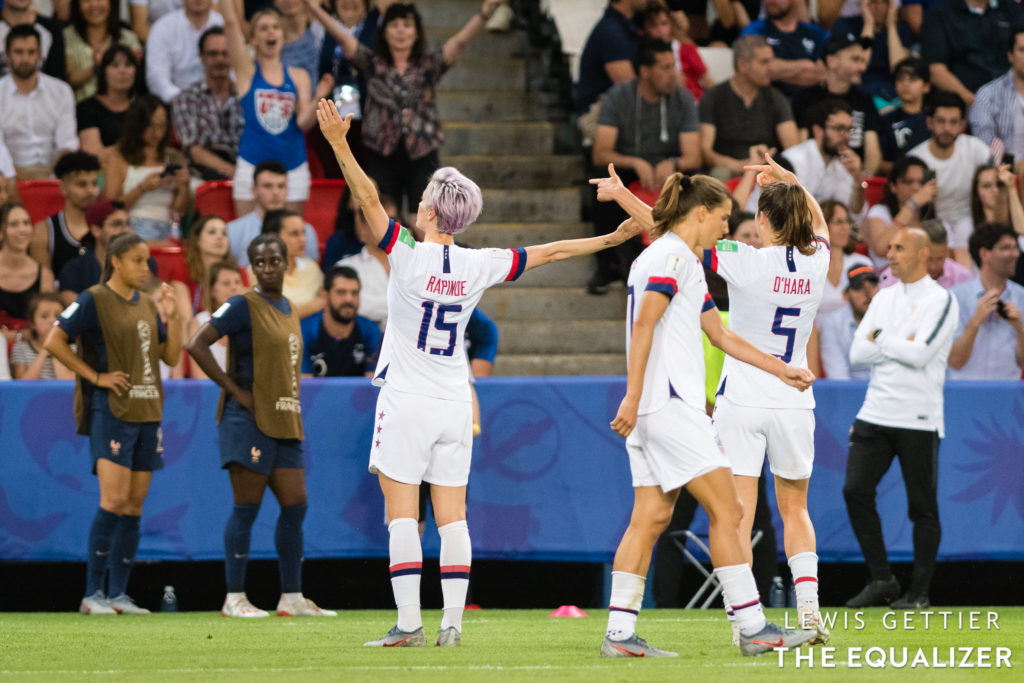 Brash talk of being the best team in the world – and the idea of the U.S. reserves being the second best team in the world attracted plenty of negative attention to the American camp. Rapinoe, by way of both her political comments and her thoughts on the France matchup, became the face of that. She was booed by a partisan home crowd throughout the match on Friday.

“I don’t really get energized by haters,” Rapinoe said after the match. She said she is motivated “by people like me and people who are fighting for the same things.”

Friday’s performance was vintage Rapinoe. The context was different in this match against France than it has been in past big moments for Rapinoe. Her typically bleach-blonde hair is a pinkish-purple now. She turns 34 on July 5 and her legs have looked heavy in the latter stages of the Americans’ past three games at this World Cup.

Is this the best U.S. women’s national team ever?

But that Rapinoe is setting herself up for big moments, and backing up her talk with winning play, is nothing new. She scored twice from the penalty spot in the round-of-16 victory over Spain on Monday in a much uglier match. And she has been a protagonist in the biggest moments of this generation of the team, delivering the cross to Abby Wambach that “saved the USA’s life” in the 2011 quarterfinal, and scoring an Olimpico on a corner kick in that epic 2012 Olympic semifinal victory over Canada.

Rapinoe’s brace on Friday brings her level with teammate Alex Morgan and England’s Ellen White with five goals in this tournament.

“She’s been fantastic this whole tournament,” U.S. midfielder Julie Ertz said. “She’s really been a light shining in big games and I’m sure glad that she’s on my team. She’s been absolutely fantastic.”

The difference with this performance is all of the noise and attention around the tournament. That 2011 World Cup came at a time when the U.S. women’s national team’s profile had dipped. Rapinoe’s cross, Wambach’s goal and the comeback in that 2011 quarterfinal served as the catalyst for the platform that this team has now.

But in 2019, Rapinoe is at the center of a fight for equality – for racial injustice, for gay rights, for equal pay. She’s one of the faces of the U.S. players’ lawsuit against the United States Soccer Federation.

“Injustice. That rattles her. In soccer terms, no, nothing really rattles her,” teammate Becky Sauerbrunn said. “I think she thrives under that pressure. She’s just willing to take on all these things and still be able to perform and kind of shove it to everyone who doesn’t believe in what she believes in. She just takes it all and she goes with it and she’s still able to perform and to stay true to who she is.”

Rapinoe hasn’t been spectacular in every moment of this World Cup, but she continues to come up big when it counts, whether in open play or in pressure-packed dead-ball scenarios. She did that again on Friday against France, embracing both the magnitude of the matchup and of the moment.

Lose, and the U.S. doesn’t just finish worse than ever before at a World Cup, but Rapinoe, in particular, likely deals with the backlash of being deemed a distraction – of talking about trips to the White House before even making a semifinal.

So, even if Rapinoe’s every touch wasn’t gold, or her every pass wasn’t crisp, her two goals are another statement from a player whose career is filled with them. In a word?  Rapinoe’s first word of her postgame press conference summed it up best: