Inside the ups and downs of USWNT fans navigating France 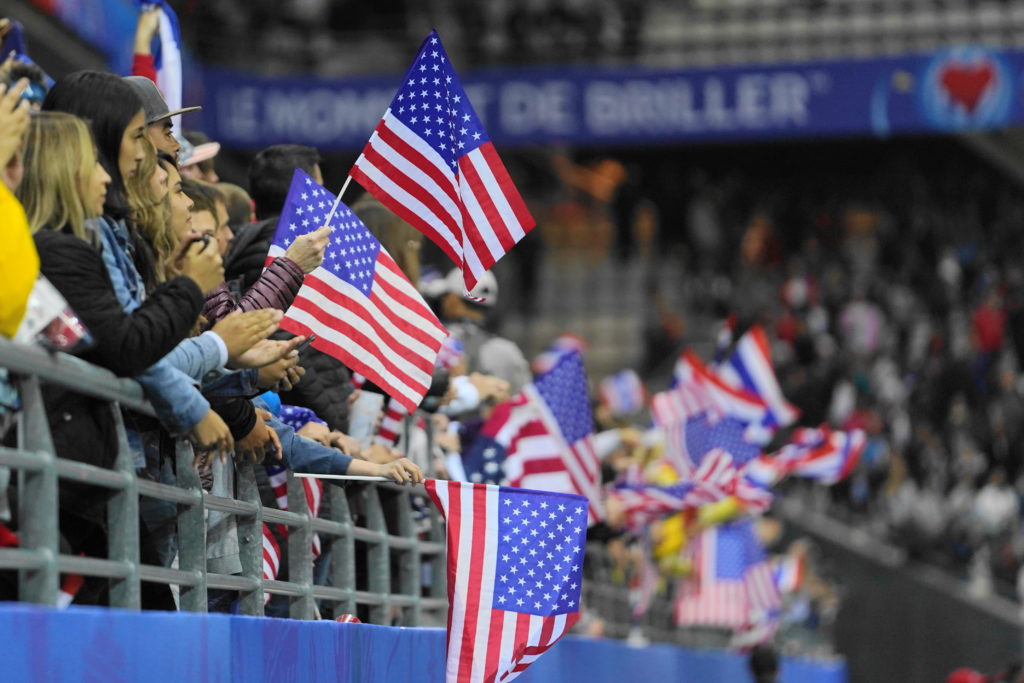 REIMS, France – It’s perhaps fitting that, of all the places in France that could have hosted a swarm of thousands of United States women’s national team fans twice in a two-week period, it would be Reims, the city where American general Dwight D. Eisenhower accepted the surrender of German forces in May 1945.

Most Americans heading to Reims will spend time in the surrounding hills of Champagne country, touring the vineyards and tasting the wine that has made this region famous around the world, or in the city center visiting Notre Dame de Reims, the cathedral which hosted the crowning of at least 25 French kings.

But in a hidden, almost anonymous schoolhouse tucked just north of the train station sits a small, red-brick building where the Americans finally helped bring peace to Europe.

U.S. fans traveling to France for this summer’s World Cup have vastly outnumbered the traveling contingents of any of their opponent’s thus far, and flooded the relatively small cities of Le Havre and Reims in the northern regions of the host nation. Americans accounted for the most number of tickets sold for the tournament for any country outside of hosts France.

Some have complained about the lack of transportation and housing options, as well as issues within the stadiums — Stade Auguste Delaune in Reims and Stade Oceane in Le Havre. The public transit systems aren’t set up to handle people needing transport after matches with late kickoff times (9 p.m. local time), cab or ride-sharing options are limited to non-existent, and the bus system in Le Havre doesn’t even show up on Google or Apple maps. There was a long line of what appeared to be at least a hundred people waiting for taxis outside the stadium in Le Havre even 90 minutes after the U.S.-Sweden match ended.

To get a small sense of how American fans are faring here in France, The Equalizer spent some time in Reims speaking to them about their experiences thus far.

Despite some horror stories on social media, no one speaking to The Equalizer reported problems with public transit. Kelly and Eric, a pair of siblings originally from Massachusetts and now living in Boston and Maryland, respectively, took advantage of the free fan shuttle in Le Havre. They complimented the event there as “well-organized” and said that, overall, the train system in France has been “pretty easy.”

Andy and Ashley, two fans from Milwaukee, took advantage of two charter buses that were hired to run fans after Monday night’s match in Reims back to Paris so they didn’t need to find a room here. They also complimented Paris’ metro system and the ease of getting by in the capital city, saying, “Everybody in Paris speaks English.”

Everyone also said that they didn’t have any trouble finding accommodations in France, with most saying they booked rooms well in advance, over the winter. William, an American citizen originally from Arkansas — who now teaches in Russia — said he had to book about two miles outside the city center in Reims, but had no complaints. Charlie, a man from San Francisco attending his first women’s World Cup, said he got “lucky” getting a room in Le Havre.

Inside the stadiums, however, all reported a different story. While there were some complaints about the long lines for food and the mild annoyance at the stadiums only selling non-alcoholic beer, most treated the issues with food and beverage as a minor concern — including Eric’s bewilderment that the French serve Tuna sandwiches at soccer games.

The real issue came down to merchandise. Ashley said the World Cup is a “once-in-a-lifetime experience” and wanted to find something to bring home. In the end, she waited “forever” just to get a program.

Charlie — who came to France for the U.S.’ games against Sweden and Spain — echoed that sentiment, saying that he’s attended four men’s World Cups in the past and that at those events, “merchandise is on every corner.” He added that “FIFA undervalues the women’s game” and said the two-hour wait at the stadium in Reims for merchandise and the lack of World Cup-themed goods about town represented “lost potential revenue” for the organization.

William, who attended last summer’s men’s World Cup in Russia and is here for the Americans’ games versus Spain and France, noted that he was “a little surprised” at the difference between the two events, especially the smaller fan zones at the women’s tournament and lack of urgency to secure tickets.

Eric, who previously attended the 2006 men’s tournament in Germany, said the merchandise lines in Le Havre were simply “too long” to make it worth the wait.

Billy and Ryan — both from Atlanta, and here in France for the U.S.’ games against Spain and France — attended matches in Edmonton and Vancouver at the 2015 Women’s World Cup and found similar issues at that tournament with “no merchandise” available, an issue that clearly hasn’t been rectified in the four years since.

When tickets for the tournament were first distributed, many fans complained about separated seats, but none of the fans who spoke to The Equalizer reported any such problems. In fact, many benefited from booking their tickets directly through U.S. Soccer, which automatically provided them with conditional tickets for the knockout round when it was unsure which path the American team would follow depending on their group-stage finish.

With the United States knocking off Spain in Monday’s round of 16, the team and the traveling hoard of American fans will now make its way back to Paris, the site of the team’s 3-0 win over Chile last week in group play.

Paris will be buzzing for Friday’s U.S.-France quarterfinal. The cheapest ticket to the match on the secondary market, as of Wednesday morning, was $375. A few tickets are listed as high as $11,000-plus. Hotels in the city are either booked up or similarly exorbitant. There’s an anticipation for Friday’s match, and that could mean a few logistical headaches.

Or, as Megan Rapinoe put it — looking at the positive of the attention on the game — “I hope it’s just a total sh*tshow circus.”

Marta’s speech only a small part of changes needed in Brazil
What now for Jamaica after World Cup debut? A league would be nice, for one