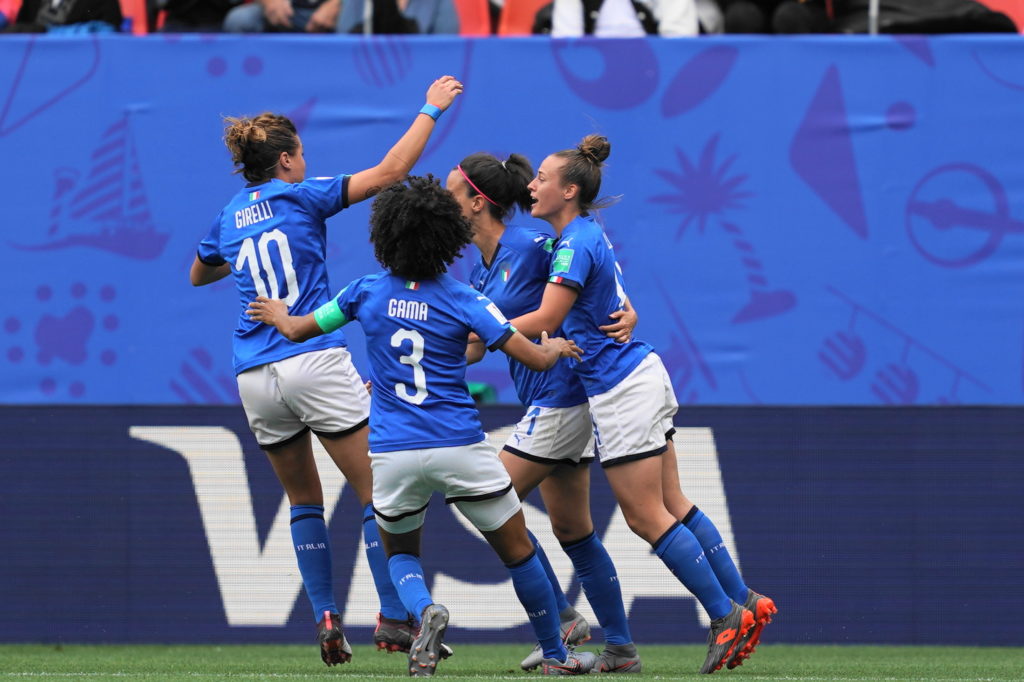 That women’s football in Italy is enjoying a renaissance, thanks in large part to the increasing professionalization in Serie A, is nothing new. Although the league is on the rise – yet still very much in an infantile stage of its development – the Azzurre have been one of the surprise packages of the World Cup this month.

Italy’s 20-year absence on the global stage in women’s soccer has been made a mere memory by coach Milena Bertolini and her team of 23 players this summer. The team, maybe the one that was overlooked in Group C, have swaggered their way through the group stage that everyone predicted would be dominated by Australia and Brazil. Those two sides were bounced in their round-of-16 matches; the Azzure have a very real chance of winning their first knockout-round match at a Women’s World Cup.

Following on from a disappointing European Championships two years ago, the Italian federation (FIGC) appointed then multi-title winning Brescia coach, Bertolini, and that’s when Italy turned a corner. Although Antonio Cabrini did little wrong during his tenure, there is a greater sense that Bertolini is the right woman for the job. The coach understands the strengths of her charges a little more than her predecessor.

As said by Italy forward Barbara Bonansea last year, with Bertolini there is harmony in the group. Bonansea cites the “togetherness” and lack of bitterness from those forced to sit on the bench. One of the star performers in the team, who earned her stripes with Brescia, said on the harmony in the group, “It’s not about the technical or the football, but it’s the most important aspect.”

A renaissance in Italy, for clubs and country

With a high number of the current crop having played under Bertolini during her time at Brescia, or just simply having been analyzed as opponents, the coach quickly put her stamp on the team — not playing a slow, defense-heavy style that many have come to associate with Italian football, but rather a fast and swift attacking game that utilizes the incisive attacking talents of Bonansea, Cristiana Girelli and Valentina Cernoia (all three current Juventus, former Brescia players).

Although Bonansea is the first player who’ll catch the attention, it truly is a team effort that Bertolini gets from her group, all 11 on the pitch on the same page at any given time.

Having finished top of their group, Italy received what is arguably a better draw, with a week off to recover from their first three matches before facing one of the four third-place finishers. Which isn’t to say that China will be an easier test than Norway (who knocked out Australia) or France (who knocked out Brazil), but the Azzurre will find themselves favorites, a rarity for them.

With little expectation on the team in the first World Cup for two decades, none of the players had a frame of reference for what was ahead of them; the Euros were the same, but different. Possibly because the focus was on Australia, Brazil and even Jamaica, Italy were allowed the freedom to go out and play – like Austria at the Euros – and no one expected much of them. So, the Azzurre had nothing to lose. Now, the stakes have been raised and as group winners, they’ll be favorites against the Steel Roses. This is where they’ll face their staunchest test.

It’s been six years since Italy reached a major tournament knockout game and 22 years since they won one (against Spain at the 1997 Euros, a tournament comprised of eight teams). As with all teams that do well at a major tournament, the home media will amp up their coverage and one by one, fans will tune in with high expectations. That creates an entirely new pressure for this Italian team, and it’s hard to know how Italy will cope.

If Italy progress to the quarterfinals, they’ll face either the European champions Netherlands – who would be making their own history, never having won a World Cup knock-out game before – or Japan, the runners-up from four years ago and champions in 2011. Although, as of yet, neither the Netherlands nor Japan have shown their best at this tournament and, plummeting head-first into hypotheticals, if Italy can stave off the pressure and play two good matches, they’ll be Lyon-bound. Absolutely nobody could have expected that.

With an aging team (there are only five players younger than 25 in the squad and seven in their 30s), there is a serious question of what comes next and how many of these players will be around at the next major tournament. This is not quite a golden generation like the one that saw Carolina Morace and Elisabetta Vignotto ruling the Azzurre, but there could yet be an immediate drop-off with the next crop of players coming through. However, the exploits of the team in France will have a clear impact on those at home, along with the increased attention in Serie A.

With their match against Brazil pulling an audience of 6.5 million on Italian television (a 29.3 percent share of the audience) and will a palpable increase in interest from the media in the run-up to the tournament, it’s clear Italian women’s football is in a far better state now than just two years ago. However, with the positive brings the pressure, Italy are venturing into the unknown and how they respond to it all remains to be seen.