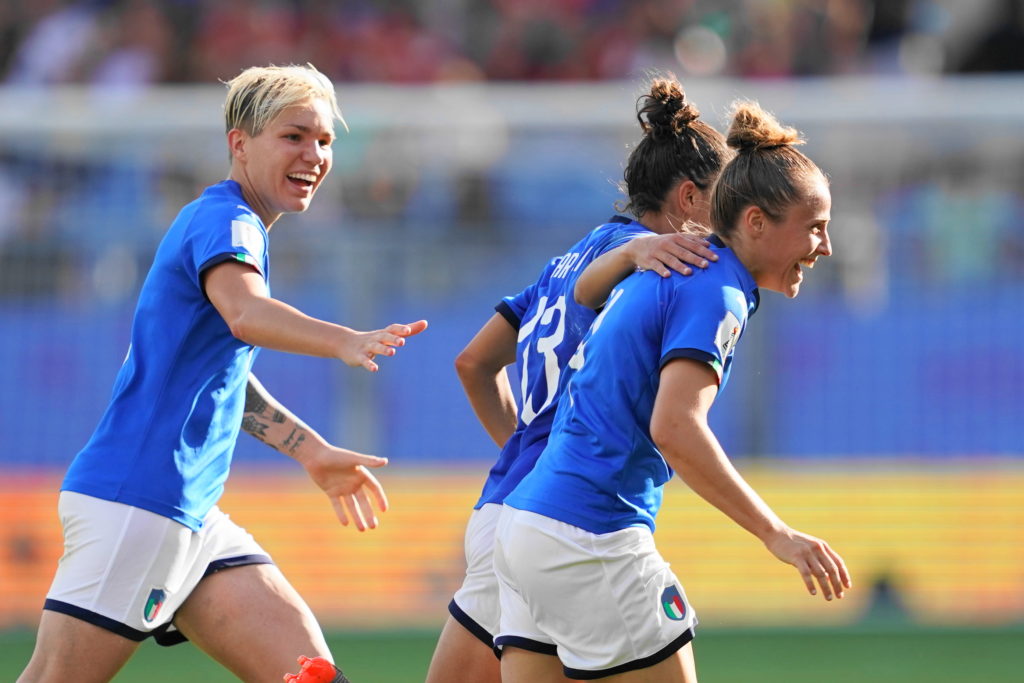 MONTPELLIER, FRANCE - JUNE 25: during the 2019 FIFA Women's World Cup France Round Of 16 match between Italy and China at Stade de la Mosson on June 25, 2019 in Montpellier, France. (Photo by Daniela Porcelli/Getty Images)

When the Italian Women’s National Team made it to the quarterfinals in 1991 they did so by taking second place in their group. Back in the first-ever Women’s World Cup there was no Round of 16. In those quarterfinals, Italy crashed out of the tournament in a loss given by Norway. However, this year, in their return to the knockout round the tale was different. Italy claimed their first-ever World Cup knockout round victory over China, 2-0.

Italy got on the board early in the first half. In the 15th minute, Elisa Bartoli attempted a shot and ended up barreling over a Chinese defender. The rebound eventually found the feet of forward Valentina Giacinti, who slotted the ball past Chinese goalkeeper Peng Shimeng.

This time it counts! The Italy striker makes the initial tackle and follows the play all the way to slot home the opening goal. #FIFAWWC pic.twitter.com/KVhcuYlDa5

Meanwhile, Italy’s tally in the second half came quicker than the first. In the 49th minute, Aurora Galli shot from outside the box to double Italy’s lead. They were able to hold off the Chinese attack, which finished the match with six shots on goal. Italian goalkeeper Laura Giuliani came up big for the Italians, recording all six saves for the clean sheet.

Italy, a surprise team in this World Cup, will now await the winner of Netherlands and Japan.

WHAT A STRIKE! Aurora Galli doubles Italy's lead with a low driven shot from outside the box. 2-0! ?? #FIFAWWC pic.twitter.com/9IhfWeoyg3

Here comes China! Wang Yan's effort with the outside of the boot forces a great stop from Laura Giuliani. #FIFAWWC pic.twitter.com/NdPpo5e8RQ

For the first time since 2007, Japan will not partake in the FIFA Women’s World Cup final. Japan made the tournament final in 2011 and captured the title over the United States. Four years later, Japan made it to the final again, but lost to the United States. Now, Japan is not heading to the Quarterfinals as the Dutch knocked off the last-remaining Asian team at the World Cup, 2-1.

Lieke Martens' backheel flick nutmegs a defender on the way in for the 1-0 lead. #FIFAWWC pic.twitter.com/ODGAxrvzAj

Lieke Martens, going for her first goal at this year’s World Cup tournament, smacked two past Ayaka Yamashita. Her first goal came in the 17th minute, but her game-winning goal was dramatic and very World Cup-esqe. Martens and the Netherlands were awarded a penalty kick when Saki Kumagai was whistled for a handball inside the box.

Martens made her penalty, as goalkeeper Yamashita dove the opposite direction.

Another lovely combination from Japan leads to a clinical Hasegawa finish, and it's 1-1. #FIFAWWC pic.twitter.com/5ngexRcKrq

Meanwhile, Japan did not remain scoreless. To equalize right before the half, Yui Hasegawa slipped through the entire Dutch backline to send a goal past Sari van Veenendaal.

Now, the Dutch will advance to the Quarterfinals to take on Italy.

MARTENS SCORES FROM THE SPOT!

Is that the game-winner for the Netherlands? Martens gets her brace after a handball penalty is called and upheld by VAR. 2-1! #FIFAWWC pic.twitter.com/KYF4trKyX9