USWNT comes out battered and bruised, but still alive 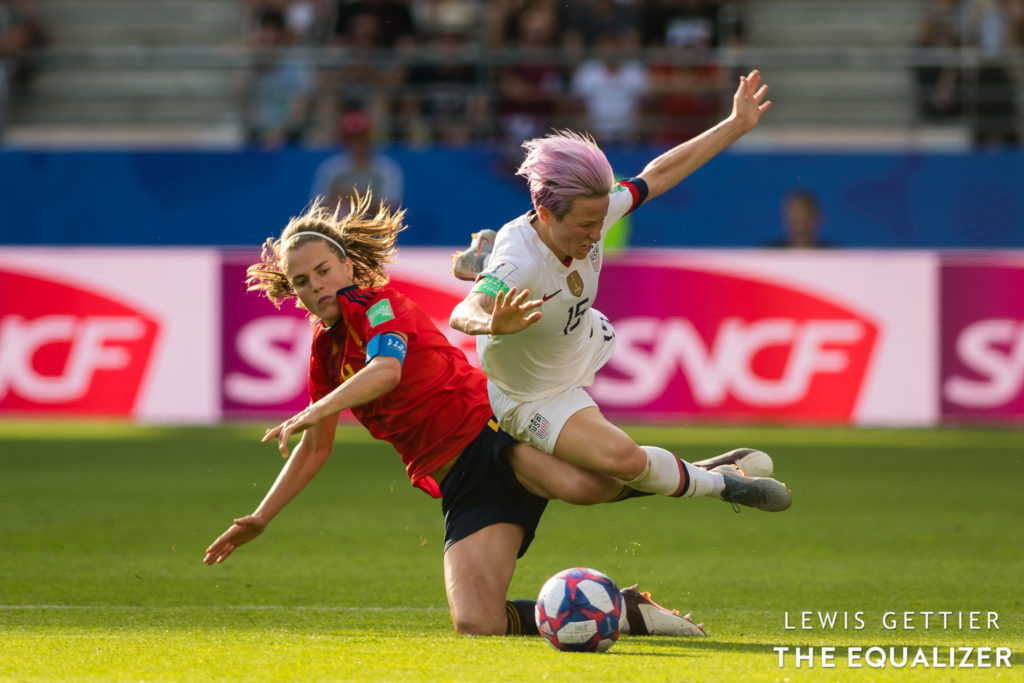 REIMS, France – Forty-five seconds into the match that most of the world expected the United States women’s national team to win comfortably, U.S. defender Kelley O’Hara found herself turning to chase Spain midfielder Alexia Putellas, who had worked her way into a blind spot. Spain were in behind.

U.S. defender Becky Sauerbrunn cleared the ball once before heading away a hard shot by Spain midfielder Patri Guijarro on a second-chance attempt. One minute in, and the Americans were under pressure.

That set the tone for an uncomfortable evening for the U.S., which prevailed 2-1 in the round-of-16 fixture to advance to Friday’s quarterfinal against hosts France in Paris.

Spain, the young, free-flowing team known for methodical possession which could lull an opponent to sleep, were aggressive from the start, pressuring the U.S. in midfield and playing a physical style of soccer more commonly associated with their opponents on the day. It was a gut punch to the U.S. – and it worked.

“Yes, every time that you are playing against the U.S., obviously it’s going to be a physical game because you’re going to have to defend that bit more,” Spain coach Jorge Vilda said.

Ironically, in the end, physicality might have been Spain’s undoing. Both goals the underdogs conceded were from the penalty spot. The first – Mapi Leon’s tackle on Tobin Heath – was pretty clearly correct, while the second – when Virginia Torrecilla’s cleat grazed Rose Lavelle’s calf – was controversial, but confirmed by video review after a five-minute delay. Megan Rapinoe finished both PKs for the United States.

The match was the Americans’ stiffest test yet at this World Cup, and one they looked like they might not pass at moments during Monday’s match – no more so than in the 9th minute, when U.S. goalkeeper Alyssa Naeher tried to play out of the back. She passed to Becky Sauerbrunn, under pressure, at the top of her own 18-yard box, and Sauerbrunn was dispossessed in a way which perfectly delivered the ball to Spain goal-scorer Jeni Hermoso for the equalizer.

“Those moments, they can absolutely destroy a team or unravel a team,” Ellis said after the match. “I actually think that the mental capacity or strength of this team – they kind of parked it, moved on, and that’s what you have to do in those moments.”

She added that it was a “tricky game” to prepare for, and the most difficult of the round of 16. What’s important for the U.S. is that they got through it. And as they showed in 2015, when they won the World Cup after a sluggish group stage, most major-tournament winners have these moments where they just need to get by.

“There’s not flawless soccer to be found in this world,” Ellis said postgame when asked about some of her team’s struggles.

Spain, though, exposed the U.S. in multiple areas of the field, no more so than on the Americans’ left, where Lucia Garcia had her way with left back Crystal Dunn throughout the match. Dunn and O’Hara were asked to push high and wide, as they typically do.

But Spain didn’t show up to the Stade Auguste-Delaune – in their first-ever knockout round match – to sit back and absorb pressure. Their dynamic 4-3-3 caused confusion for the U.S. as Hermoso dropped in to receive the ball, and Vicky Losada – who had to be substituted in the 32nd minute due to a swollen, black eye in an off-the-ball incident – pushed into gaps which the Americans’ better opponents have often found in matches this year.

Even on the goal Spain scored, they dropped off just enough to bait Naeher into trying to play out, before Lucia Garcia pounced on Sauerbrunn’s blind turn at the top of her own box, dispossessing the veteran U.S. defender.

“I think I just need to make a smarter decision,” Naeher said. “Not play it into a pressure pocket. [It] probably would have been better just to put up the field a little bit more and play higher up. Things happen. It’s an unfortunate goal to give, but [I’m] proud of the group for coming back.”

In short, Spain executed their game plan to near perfection, and would be within reason to feel hard done by the results. “I actually think that we deserved more, but you know, sometimes football is like that,” Vicky Losado said.

Vilda’s knowing smile at the final whistle, as he gazed over to the Americans celebrating their victory, seemed to be the picture that told a thousand words. He’d prepared his team as well as anyone has to face the United States in recent memory. U.S. players looked rattled at times, appealing to referee Katalin Kulcsar throughout the match. Spain was whistled for 17 fouls to the United States’ five, but was only cautioned once, and not until the 85th minute.

France now looms for the U.S. on Friday at the Parc des Princes. It’s the game that everyone has been waiting for since the draw on Dec. 8, and it’s finally reality after each tournament co-favorite eked past Brazil and Spain, respectively.

France will have seen plenty from Spain which they might be able to exploit on Friday, particularly on that left side for the U.S., where a quick and crafty Kadidiatou Diani will line up opposite for France.

Ellis said she’s a glass-half-full kind of person, and her players echoed that postgame. For the U.S., beating Spain was perhaps more a matter of survival than some thought it would need to be, but it’s the kind of match which every major-tournament winner needs to endure at some point on their journey.

“I think this is the game that everyone had circled,” Rapinoe said of the USA-France quarterfinal. “I think it’s going to be a great game. I hope it’s wild and crazy. I hope the fans are crazy and there’s tons of media around it and it’s just a big spectacle. I think this is incredible for the women’s game when you have two heavy-hitters meeting in the knockout round. I think this is everything you could want from these two sides.”

Five takeaways from the USA’s scrappy win over Spain
USWNT overcoming momentary ‘debacle’ is reminiscent of ’99, ’15