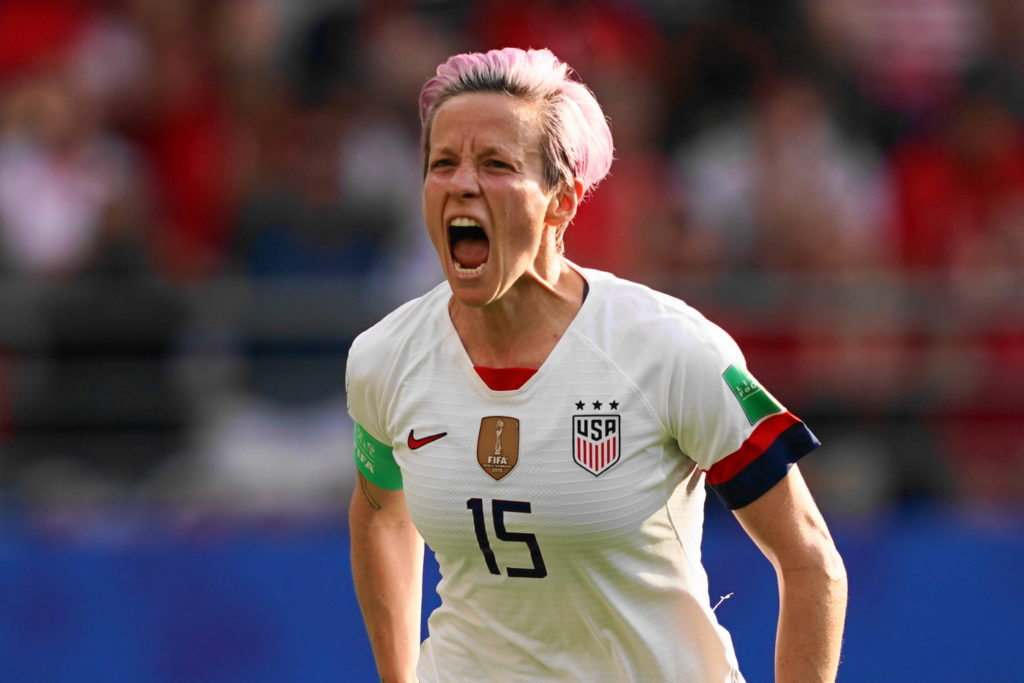 REIMS, FRANCE - JUNE 24: during the 2019 FIFA Women's World Cup France Round Of 16 match between Spain and USA at Stade Auguste Delaune on June 24, 2019 in Reims, France. (Photo by Daniela Porcelli/Getty Images)

Megan Rapinoe took a deep breath and focused on three things: the ball, the back of the net and Sandra Paños. She did this twice, as Rapinoe slotted home two penalty kick opportunities for the United States to secure a narrow Round of 16 victory over Spain, 1-2. Alex Morgan looked to step up initially to take the second penalty, but as a lengthy check from VAR went on, the USWNT elected to have Rapinoe take it.

Meanwhile, Spain also found the back of the net. Just two minutes after Rapinoe’s initial penalty, Jennifer Hermoso picked up a bad defensive pass from Alyssa Naeher to Becky Sauerbrunn and slotted it past Naeher. However, after the second penalty, Spain couldn’t muster up another shot past the U.S. goalkeeper.

Tobin Heath is awarded the penalty and the captain sends it home. #FIFAWWC pic.twitter.com/jOgofUTc4J

Spain finishes the FIFA Women’s World Cup in their best-ever position. In the 2015 World Cup, their first-ever tournament, Spain didn’t make it out of the group stage. This year, they second in their group behind Germany, advancing to the knockout round.

Now, for the United States, the game that everyone chatted about since the World Cup draw is coming: France. The host nation beat Brazil yesterday to advance to the quarterfinals. Back in January, both sides met up for a friendly where the French scored three goals to rout the United States, 3-1. The match will be held on Friday at 3 p.m. EST/12 p.m. PT.

Jenni Hermoso makes the U.S. pay for the turnover and it's 1-1 inside 10 minutes. What a start to this one! #FIFAWWC pic.twitter.com/G1zwO1ZLYw

Christine Sinclair won’t be breaking Abby Wambach’s goal-scoring record at the FIFA Women’s World Cup. Sinclair and Canada were ousted out of the competition on Monday by Sweden, who took down the Canadians, 1-0. Stina Blackstenius scored the game-winning goal in the 55th minute.

However, it was goalkeeper Hedvig Lindahl that was the hero for Sweden. In the 68th minute, Kosovare Asllani was shown a yellow card for a handball in the box. Her yellow resulted in a penalty kick opportunity from Canada. All eyes were on Sinclair, but she never stepped up to take the kick. Instead, Janine Beckie took her place over the ball instead. However, her shot was denied, being saved by the Swedish goalkeeper.

Hedvig Lindahl makes a brilliant stop on Janine Beckie's attempt to keep Sweden on top! (And yes, she stayed on her line) #FIFAWWC pic.twitter.com/x9XJx0tIBA

Blackstenius beats Labbé to Asllani's cross and puts it in for her first #FIFAWWC goal. pic.twitter.com/oq0yHXTCZs