Did USWNT gift Spain an advantage by playing recent friendly? 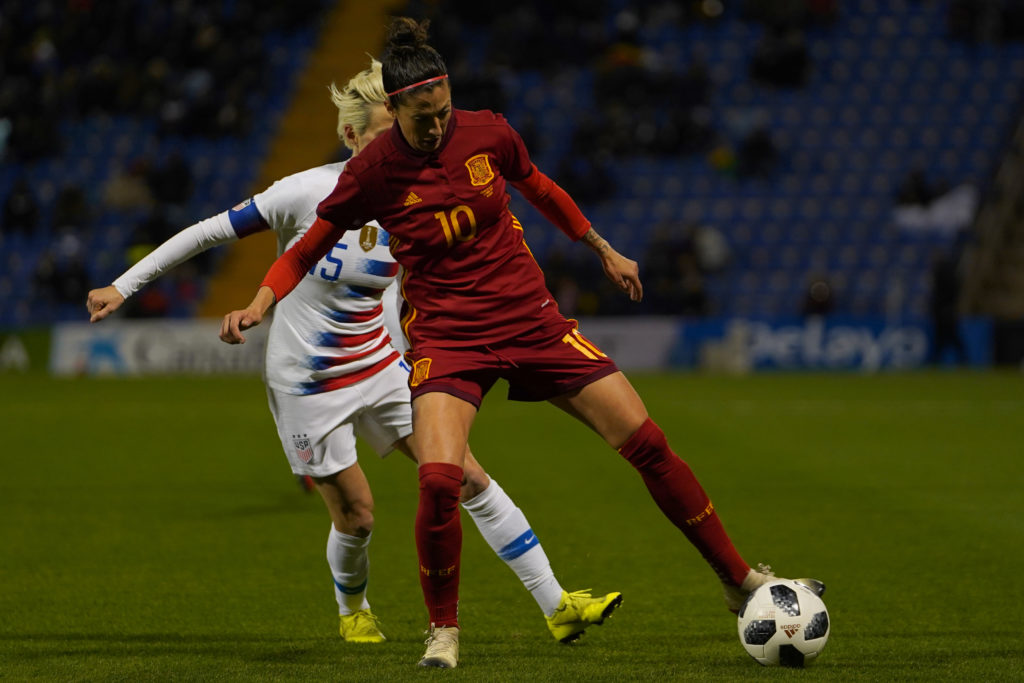 Christen Press collected the ball inside of her own half, looked up, and decided to change the game herself. The United States women’s national team forward had entered the friendly to start the second half, and within the first 10 minutes, she changed an otherwise lethargic performance by the Americans, putting her head down and dribbling 60 yards before scoring the only goal of the game as the U.S. defeated Spain, 1-0.

That match was the second of a pair in Europe to open the calendar year. The first came three days prior against France in Le Havre, where the Americans got a taste of what it might be like to play the hosts at the World Cup, and a familiarization with one of their group-stage venues. France won that first match 2-0 against a U.S. team that was decidedly not head coach Jill Ellis’ preferred starting lineup, a conscious choice by Ellis to not show her hand ahead of a possible quarterfinal meeting.

Sam Mewis’ is knocking on the door to start. But who do you bench?

Narrowly beating Spain 1-0 – while being out-possessed and out-passed on the day – didn’t ease any concerns about the U.S.. And the SheBelieves Cup, where the U.S. drew Japan and England, 2-2 each before narrowly defeating Brazil – plus the wild 5-3 victory over Australia in an April friendly – only confirmed the obvious about the defensive issues the Americans were enduring.

Now they are staring down the same two opponents at this World Cup. Spain stands immediately in the way of the United States’ quest to repeat as World Cup champions. The two teams face off Monday in the round of 16, with the winner advancing to face either France or Brazil on Thursday in the quarterfinals in Paris.

“Spain’s a great side,” Ellis said Thursday, noting that January was the first meeting between the sides. “It was really actually purposeful, why we wanted to play them early in the year. You get a sense of a team. Obviously, [they are] a good team… Any team that gets out of their group and is in this position, you 100 percent respect. You need to have good preparation and good performance to do well against them.”

Given the Americans’ lack of any real road games, their jaunts to Europe last November (to face Portugal and Scotland) and January were undoubtedly valuable in preparing them to play abroad – even in the hostility of playing the host nation.

But it’s a wonder whether that January match in Alicante was even more valuable for Spain. The two teams had never played at the senior level prior to that meeting. Spain is a leading example of how investment from traditional men’s soccer powers can translate into success in the women’s game.

Spain last year won the U-17 World Cup and finished runners-up at the U-20 World Cup. La Roja also won the UEFA U-19 title in 2018 and 2019, after three consecutive years of finishing runners-up. Of all the rising programs which look like they could join the traditional world powers over the long term, Spain – along with European champions Netherlands – look the most likely to stick around thanks to sustainable development pipelines. Each program has enjoyed incredible success at the youth levels over the past few years.

Both programs find themselves in their second consecutive World Cup. Netherlands have already found success at the senior level, winning the 2017 European Championship on home soil in inspiring fashion. Spain is still waiting for that breakout, one which – particularly given this unkind draw which produced a lopsided bracket – likely means that the 2023 World Cup will be their true time to shine, when the current generation of U-20s near the peaks of their careers.

Still, when Spain coach Jorge Vilda spooke of lessons from that January friendly against the United States, it sounded like a familiar refrain from opponents. One way in which teams around the world have closed the gap on the United States is by erasing the intimidation factor. Major tournaments always bring about the near-cliché concept of the prevailing American mentality, and how this intangible characteristic can will the side to victory.

For opponents, that was long viewed as an excuse – a fear factor. Slowly, that reverence has eroded. France and England players have spoken of that after playing the U.S. regularly at the SheBelieves Cup over the past few years. And Spain saw in January that there was no need to be intimidated. Collectively, they can compete with the United States. They can hang with the world’s best. January’s match proved that to them.

“Playing against the best team in the world for the first time made us understand what playing against such fast players, with great technique in a well-learned system would mean,” Spain head coach Jorge Vilda said when I asked him, following Spain’s 0-0 draw against China to finish the group stage, about the lessons he took from the U.S. encounter.

“This is something we studied. This is a game where any single detail can change things so we’re going to look at what we’ve done and try and correct our mistakes and try and reap on our strengths in the run-up to the game. We’ll try and do what we do best.”

By pure numbers, the Americans were out-passed and out-possessed in that January meeting. They struggled to connect and break down Spain, particularly in the midfield.

And it wasn’t for lack of first-string players. Unlike against France three days earlier, when the U.S. rested several key players, Ellis rolled out her choice starting 11 against Spain (but for O’Hara, who was hurt; Emily Sonnett started at right back).

That first-hand scouting opportunity may not be enough to tip the scale in Spain’s favor on Monday against a steamroller of a U.S. team which looks as deep and as talented as it has in recent memory – certainly more so than in 2015, when the U.S. grinded its way to the title.

It could, however, be just enough to make things interesting for the Americans. Plenty of scouting has since been done on both sides, and U.S. defender Kelley O’Hara, who missed those January matches due to injury, acknowledged that it’s good to be familiar with a team prior to a major tournament.

Ellis said that she “actually pushed hard to get that game” scheduled. Eighty percent of her focus at all times is on her team, she says, noting that the other 20 percent is factoring the opponent.

“You want to benefit yourselves, so I don’t think of an approach of what benefit it gives our opponent,” Ellis said on Sunday. “It’s always a benefit for us. I think it’s critical that we played Spain. We didn’t have a history with them. To know a team, to get out on the field with them, I think both teams are probably at very different stages in where that game was. I think there’s an understanding of that.”

On Monday, those two teams will be on the same stage – the round of 16. Each has a very version of history on their minds.