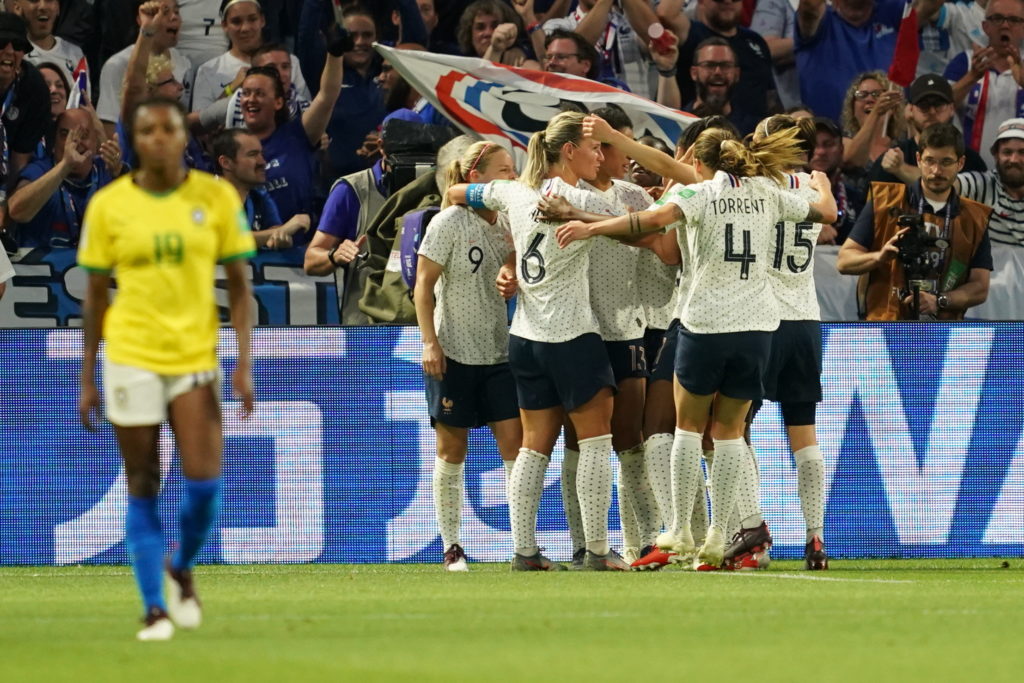 Hosts France narrowly avoided disaster in the round of 16, needing extra time to defeat Brazil, 2-1 on Sunday in Le Havre. Amandine Henry scored the game winning goal in the 107th minute, lunging to redirect service from Amel Majri.

Valerie Gauvin gave Les Bleues seven minutes after halftime, redirecting Kadidiatou Diani’s cross. Gauvin had looked to put France ahead in the first half, only to see video review call off her goal.

Thaisa equalized for Brazil in the 63rd minute to add tension for the hosts, but Brazil ultimately broke down in the extra 30 minutes.

Game of the tournament?

Relive all the action with our 90' in 90" highlights ⬇️ pic.twitter.com/qXYruLRfIY

This could be the end of an era for Brazil. Formiga is 41 years old and played in her record seventh World Cup. Marta is 33 and Cristiane is 34; whether or not they are back in another four years is a major question.

After the match, Marta implored the future generations of Brazil to work harder and strive to be better.

"Cry in the beginning so you can smile in the end"

Marta's message for Brazil's next generation will give you CHILLS. ?? pic.twitter.com/waDAFlgM4F

England is heading back to the quarterfinals after capturing a 3-0 victory over Cameroon. Before the match even began, Cameroon made history by being one of two African nations to make the Round of 16. Nigeria was the other team, but saw their World Cup journey end yesterday against Germany.

England kept control of the match and took advantage of a Cameroon blunder in the 14th minute. On an indirect free kick, English defender Steph Houghton found the back of the net to garner an early lead. Meanwhile, Ellen White added to the lead right before halftime. VAR did a quick check to make sure that White wasn’t offside, and ruled that the goal was indeed good.

3-0! England are ruthless at the other end and add to their lead just minutes after Cameroon believed they cut it in half. #FIFAWWC pic.twitter.com/Y4wOo2D9cy

In the second half, England got a break when VAR ruled that Ajara Nchout was offside and cancelled her goal. For Cameroon players and coach Alain Djeumfa, the offside call sparked controversy and plenty of reaction.

However, England remained collected and added a third goal to secure their place in the quarterfinals. Alex Greenwood scored her third international goal in the 58th minute, off a perfectly place ball from Toni Duggan.

The Lionesses will now face Norway in the quarterfinals on Thursday at 3 p.m. EST.

"That wasn't football for me. That wasn't a World Cup last 16 in terms of the behavior that I want to see. This is going out worldwide … young girls playing all over the world are seeing that behavior."

– England manager Phil Neville on Cameroon's actions in the Round of 16. pic.twitter.com/gqmovZb3DX