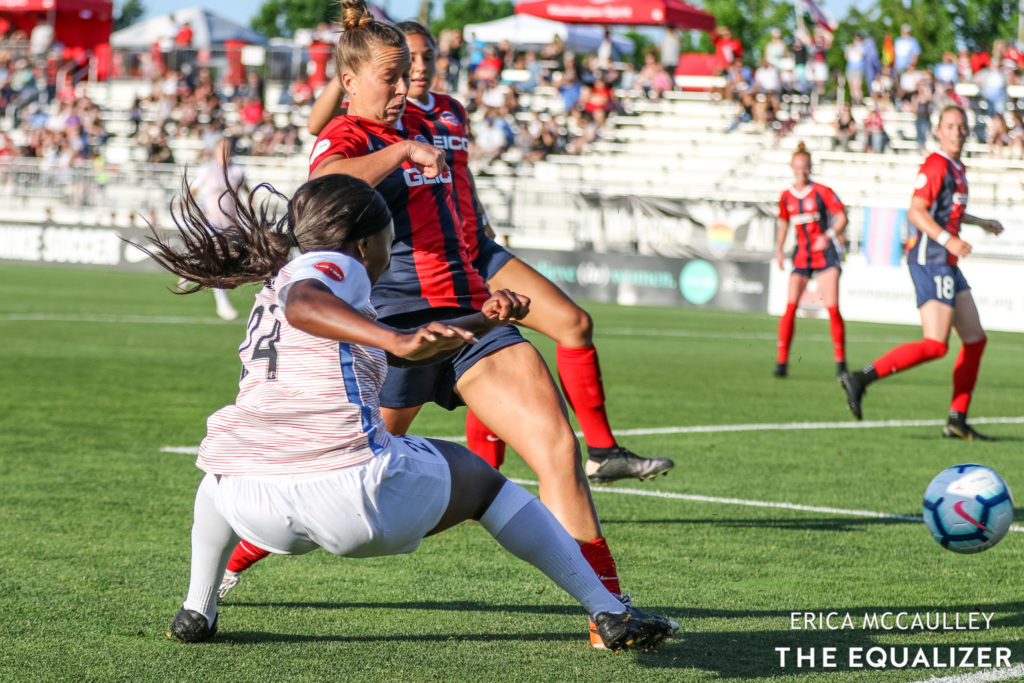 Washington and Houston continued the weekend’s trend of scoreless draws in the NWSL. The Spirit came out strong and pressured Houston’s backline consistently. Jordan DiBiasi was often heavily involved in the build-up, finding Ashley Hatch on the end of her service, but Hatch struggled to put her chances on target. When she or her teammates did, she was denied by great defending from Amber Brooks and Jane Campbell. Lacking possession, the Dash played more for the counterattack but were too wasteful from Kealia Ohai and Sofia Huerta in the end.

In fact, the game was more notable for what happened off the field than on. During the Spirit’s first-ever official Pride night, Washington celebrated the career of Spirit mainstay Joanna Lohman and retired her jersey in honor of her retirement from professional soccer just before the season began.

Washington (5-1-3) retains the top spot and their undefeated streak, now stretching to seven and will host North Carolina next Saturday. Houston (3-2-4) takes fifth place and remains undefeated on the road this season. They host Portland next Saturday.

The Orlando Pride won for the first time since last July and left Sky Blue FC alone on the bottom of the NWSL table. The teams traded penalty kicks bfefore the Pride prevailed when Marissa Viggiano’s cross  was deflected in off Gina Lewandowski for an own goal.

The Pride struck first in the opening half after they played a short corner and Carson Pickett’s ball in deflected off Liz Eddy’s arm. Chioma Ubogagu stepped up and scored from the spot to put the visitors on top.

Sky Blue answered in the second half when Morgan Reid reached out her foot to block Jen Hoy’s cross and knocked it off her own arm. The Sky Blue captain Sarah Killion went to the spot and tied the match.

But the Pride would prevail on the own goal in the 81st minute. Ubogagu did well to keep possession and then Viggiano hustled to keep her own ball alive as it approached the end line. Her cross back in front was inadvertently knocked in by Lewandowski.

The Pride (1-7-2, 5 pts) moved to8th place and snapped a 15-match winless streak. They also gave Marc Skinner his first win as an NWSL coach. Sky Blue (0-7-2, 2 pts) drop to the bottom. Both teams will be in Chicago for their next match, the Pride on Sunday, June 30 and Sky Blue–after a week off–on Saturday, July 6.