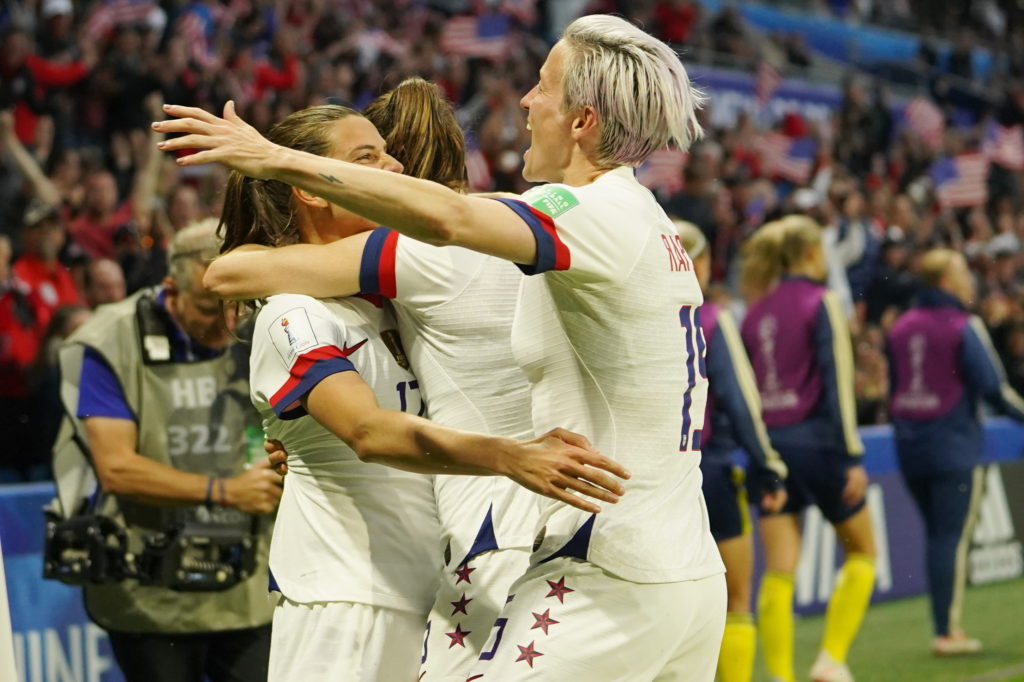 LE HAVRE, France – The United States women’s national team passed its first real test of the 2019 World Cup on Thursday night with a comprehensive 2-0 win over Sweden. Following decisive wins over Thailand and Chile to open up the group stage, the U.S.’ final match against their long-time Nordic rivals was highly anticipated as a true measuring stick for the American team.

Here are three thoughts from the game.

A knock to Julie Ertz forced head coach Jill Ellis to deviate once again from what is widely believed to be her preferred starting XI. Once again, in came Sam Mewis, as Lindsey Horan dropped into Ertz’ usual No. 6 position—the same midfield set-up the Americans used against Thailand when a knock to Becky Sauerbrunn forced Ertz to play center back in that contest.

Horan played superbly on the night, working well in traffic and with her back to pressure to help the U.S. possess the ball out of positions deep in their half. She also switched the point of attack consistently to help open up the American attack and scored the game-winning goal.

Mewis continued her strong tournament, notched the assist on the game-winning goal and pulled the Swedish defense apart on multiple occasions. She repeatedly hit 60-yard pinpoint switches to the weak-side wingers and, among other highlights, put Alex Morgan and Carli Lloyd both in alone on goal in the 16th and 90th minutes, respectively.

Front line slightly off its game

The front line worked hard on Thursday night and created plenty of “half-chances,” but struggled to put it all together. On the left, Megan Rapinoe switched the field, combined well in the attack and worked hard defensively. She also earned the corner and provided the service on the U.S.’ first goal. Still, her effect on the game dropped off as the game wore on and she put her two best chances in the game into the side netting and over the goal.

On the other side of the field, Tobin Heath provided plenty of highlight-reel material, including a trademark nutmeg and one sequence where she danced through two defenders to win the endline and get off a service. Like Rapinoe, Heath also worked hard defensively on the night. Still, she got caught in possession frequently, often the result of too many touches—and usually touches away from goal. Her goal—harshly ruled an own goal—came off a deflection and probably should have been disallowed anyway with Lloyd in an offside position at the start of the play.

In the center, Morgan picked up a knock and came off at the half with Lloyd taking her place at the No. 9 position. Both players had gilt-edge chances to score, and both failed to convert those chances.

Sam Kerr can take Australia, far but not far enough

The defense passed its first test

While Sweden did manage to break down the U.S. defense on several occasions, the Americans still earned the shutout.

Crystal Dunn got turned in the 35th minute and Becky Sauerbrunn was forced to clean up the mess. Dunn also had a bad giveaway in the 40th minute, but otherwise played a solid game. Her weak-side clearances stifled more than a few Swedish attacks and her passing created two counter opportunities, including one that the Swedish goalkeeper had to rush out and head away outside her area in just the sixth minute of play.

Kelley O’Hara struggled as well, at times, getting turned badly in the 54th minute and then over-committing on her recovery run. On the play, Alyssa Naeher saved the ball at the near post, one of two memorable plays—including a diving punch in first-half stoppage time—the U.S. goalkeeper made in a solid performance.

O’Hara also got beat again in the 66th minute and then gifted the Swedes a late corner kick in the 81st minute with a poor back pass.

Sauerbrunn, for her part, got caught out of position on two separate occasions—for opposite reasons. In the 13th minute, she got caught stepping when she should have been dropping and Sweden nearly got in behind. Then, only eight minutes later, she did the opposite as a Swedish attacker dribbled across the face of the U.S. defense.

Faced with the indecisiveness of Sauerbrunn, Dunn stepped, which then created space out wide for Sweden to exploit and create a dangerous opportunity.

Of the back four, Abby Dahlkemper proved the most reliable on Thursday, breaking up several attacks and playing a largely mistake-free game.

The Netherlands deliver Canada a wake up call
Surprise! Set pieces are really important at a World Cup