On to the next one: USWNT tops Group F with little resistance 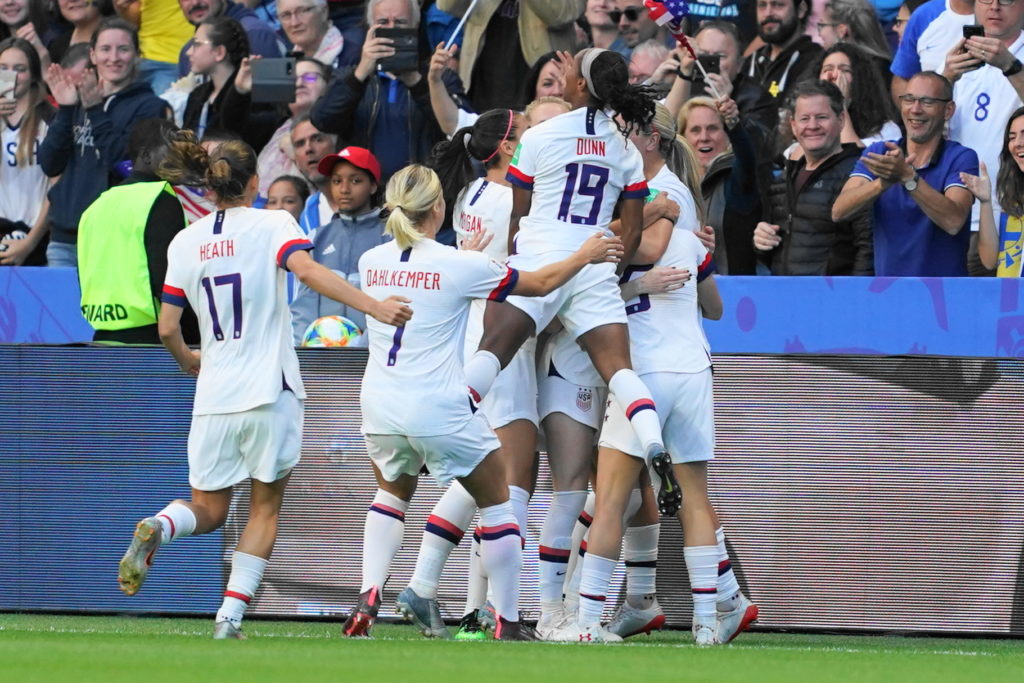 LE HAVRE, France — Lindsey Horan scored the fastest goal at this 2019 World Cup thus far on Thursday at Stade Ocean, putting to rest any lingering doubts of whether the United States might struggle in its first real test of this World Cup (with respect to Thailand and Chile).

The U.S. added a second goal — officially scored as a Jonna Andersson own goal, but very much Tobin Heath’s doing — five minutes after halftime and won 2-0 to secure first place in Group F and a round-of-16 date with Spain on Monday in Reims, where the U.S. started this tournament.

Sweden rested some starters on Thursday in anticipation of the knockout stage — after head coach Peter Gerhardsson held his cards close the day prior — and the U.S. never looked too bothered by the Swedish attack, but for a tricky moment or two down the Americans’ left side. It was a comfortable win for the U.S., and

“I don’t have a rear-view mirror. I look at what’s in front of me,” U.S. coach Jill Ellis said postgame, when asked whether the victory was any sweeter after the 2016 Olympics quarterfinal exit at the hands of Sweden. Ellis said she remembers more clearly the 2015 World Cup group-stage draw with Sweden than the 2016 Olympic failure.

It was a historic group showing for the Americans, whose 18 goals (13 against Thailand) is a new record for the group stage of a World Cup. But the Americans continue to reiterate that they are taking things one game at a time, but everything — the U.S. winning Group F and hosts France winning Group A — has gone to plan to keep the tournament co-favorites on a quarterfinal collision course in Paris on June 28. First, the U.S. must get past Spain on Monday. France faces Brazil on Sunday in Le Havre in the round of 16.

There is still planning and game-management which needs to be done. Ellis said postgame that she took off Rose Lavelle in the 63rd minute in a continued effort to manage players’ workloads. Ellis rotated seven starters against Chile on Sunday, and by the end of that match, all 20 field players on the U.S. roster had played.

Thursday’s match brought two minor concerns for the United States. Julie Ertz was held out of the match as a precaution due to a hip contusion. And Alex Morgan “took a knock in the first half,” per Ellis, and the U.S. staff pulled her off at the start of the second half, inserting Carli Lloyd. Ellis did not specify the injury and Morgan did not speak to media postgame.

“It’s a zero-risk game in terms of having players available for the next round,” Ellis said.

That’s really the most important point going forward. The health of Morgan and Ertz will need to be monitor — particularly in the case of Ertz, since there isn’t a true like-for-like replacement for her in the No. 6 role.

And of some concern for the U.S. will be potential, looming suspensions for important players if they pick up another yellow card. FIFA’s ridiculous rules remain: two yellow cards accumulated from the start of the tournament through the quarterfinals equal a suspension. That’s five games with only one yellow card to spare before suspension.

Horan and Allie Long picked up yellow cards against Chile. And U.S. defender Kelly O’Hara was booked for a crunching tackle on Fridolina Rolfo in the 59th minute.

“Yeah, that was unfortunate,” she said postgame. “Not stoked on that. Just gotta be smart.”

She continued: “I definitely need to be aware of that [having a yellow card] and that’s got to be in the back of my mind. Just play accordingly.”

Getting to a semifinal, as the U.S. plans to, without any suspensions might be tough. O’Hara is a fullback who doesn’t shy away from tackles, and Horan’s ever-evolving role in midfield (she was asked to play the No. 6 role on Thursday in the absence of Ertz) means she’ll likely be asked to make at least a few more decisions on whether to make or pull out of a tackle.

It’s unlikely anyone in the U.S. camp will be overly bothered by potential suspensions. They successfully dealt with suspensions at the 2015 World Cup en route to their title, and their obviously superior depth to the rest of the field means there are second options in all positions. That’s something Ellis has specifically said she learned from the 2015 tournament.

Managing work loads of players will continue for Ellis, who has a robust sports science team at her disposal. And potential suspensions? In all cases, the sentiment seems to be that they’ll just deal with them if they happen. But resting players simply because they have a yellow card doesn’t appear to be on the table.

U.S. players and staff often discuss the World Cup as two mini tournaments. The group stage is over — and, it has to be said, it has passed without considerable challenges for the United States. Check the box and move on. Spain — and then, probably, France — awaits.

“For us, it’s on to a next challenge, on to a next game,” defender Crystal Dunn said. “Every team is going to throw something new at us.”