Timing is everything, and FIFA’s has been awful for the Women’s World Cup 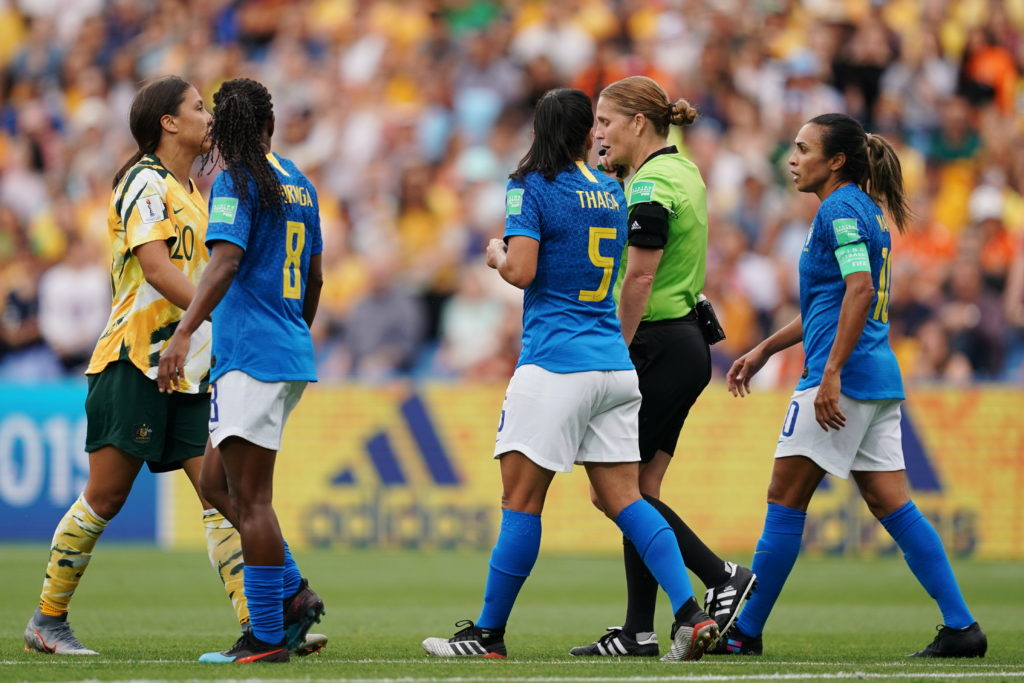 Let’s not kid ourselves: The Women’s World Cup is a testing ground for FIFA.

Video review continues to dominate the storylines and change results at this 2019 World Cup. That the laws of the game haven’t yet been adapted to account for the use of this modern technology is a wider discussion for all of soccer, and one FIFA needs to have moving forward.

But for the women’s game specifically, the most poignant reminder of their place in the game – in the view of the world’s governing body – is the timing of everything the implementation of both video assistant referees (VAR), and the modification to the law (and level of enforcement) around goalkeepers facing penalty kicks, which is proving to be the most contentious (and confusing) points of this World Cup for players and fans alike.

Women’s players and coaches had to practically shame FIFA into using VAR for this World Cup after the technology was successfully implemented for the men’s tournament last year in Russia. FIFA was mum on the topic last year – as calls for VAR at the Women’s World Cup gained steam – throughout the calls for VAR last year, only to somewhat quietly introduce VAR as part of a referee training camp in February. VAR was officially approved for use at the 2019 World Cup on March 15 – less than three months prior to the tournament.

In a sense, players, coaches and just about everybody got what they asked for. The men had VAR at the World Cup and now the women do as well.

FIFA’s delayed decision to actually approve the technology, however, meant a few things: Firstly, that video assistant referees already trained in the technology would need to be brought in for the World Cup, because there wasn’t enough time to train a whole new pool. That meant a break from the traditional of having entirely female referee crews at the Women’s World Cup, since almost exclusively men were trained in the technology (all 15 video assistant referees at the 2019 World Cup are men). Fine, no problem. United States head coach Jill Ellis said last year that she just wanted equal technology; whether men or women operated it didn’t matter.

Still, the pool of over 70 referees and assistant referees needed to be trained in the process of using it. They had their training camp in Qatar and got to test out the process in real matches in a boys’ tournaments in Qatar.

Players, however, weren’t afforded the same luxury. No domestic or international women’s competition used video review prior to the Women’s World Cup. So, women’s players turned up to France this month having had to prepare for the biggest tournament of their lives while adjusting on the fly to an entirely new way of officiating.

Where the problem with this impromptu learning is particularly pronounced is in the tweak to the rule – more accurately, the enforcement – for goalkeepers on penalty kicks, the item which has been the controversial talking point dominating this World Cup – and rightfully so, since the calls have had real effects on whether the likes of Nigeria and Scotland, for example, advance out of the group stage.

The updated law states: “The goalkeeper must have at least part of one foot on/in line with the goal line when the kick is taken; cannot stand behind the line.” It’s still illegal for a goalkeeper to come off her line, but the recent rule change allowed for one foot to come forward so long as one remained on the line – in theory, a positive for goalkeepers. But the concession was accompanied with a crackdown on even minor offenses. Which, again, is fine…but for the timing.

The rule change went into effect on June 1. The 2019 World Cup kicked off on June 7. It’s farcical timing, and it’s so pronounced that referees are providing lengthy instructions to goalkeepers on the field prior to penalty kicks.

A report on Thursday stated that the Premier League, which will introduce VAR starting this coming season – which kicks off in August – won’t use the technology to enforce goalkeeper encroachment. The timing here is hardly coincidental. The uproar and outrage at this World Cup are loud enough. The Women’s World Cup has served its purpose as a beta test.

Not to mention, VAR was implemented to correct “clear and obvious errors.” There’s a ludicrous juxtaposition of that term with relatively microscopic infractions from goalkeepers, so much so that zoomed camera angles have  needed to detect an inch of grass between the goalkeeper’s heel and the goal line.

To be clear, it has always been illegal for goalkeepers to move forward off their line on penalty kicks. Previously, it was just poorly enforced, to the point that to this point most minor movements were deemed acceptable.

Again, it’s about timing. It’s not so much that the rule is a problem. Goalkeepers have been getting away with far more egregious infractions on penalty kicks for years. If VAR existed in 1999, U.S. goalkeeper Briana Scurry would have been cautioned for stepping some three yards off her line, and Liu Ying gets to retake her kick. Maybe China wins the 1999 World Cup if that is called. The point is, far greater infractions have happened for a long time. Cracking down on them more is fine. Doing so using new technology introduced (not specifically for that rule) for the first time at a major tournament, and through a rule that was officially changed days before the tournament, is not OK.

And if there is any naïve thought that this is just a singular occurrence of disregard for the women’s game, you need not look any further back than the previous Women’s World Cup to see that it was used to test out a drastic change FIFA was thinking about.

The issue in 2015, of course, was artificial turf. Canada successfully hosted the 2015 World Cup on artificial turf, the first senior tournament to be played on something other than natural grass. Women’s players fought for more than two years for a change to natural grass, claiming sexism from FIFA and unsuccessfully trying to force change through the Canadian legal system. The men would never have to play on this, was the sentiment.

And they were right. There were whispers throughout that time period that FIFA was testing the idea of artificial turf for future tournaments. Canada, as a host, wanted to use the Women’s World Cup to show that the country could handle the true big prize, the men’s World Cup. And in the time since, Canada was awarded co-hosting rights to the 2026 Men’s World Cup and will host 10 of the 80 matches for the 48-team tournament alongside the U.S. and Mexico, with all games being played on – you guessed it – grass.

Players, led largely by Abby Wambach and an American contingent, were unsuccessful in forcing change from artificial turf at that 2015 World Cup. They did, as some consolation, secure a promise that it wouldn’t happen again. And indeed, this 2019 World Cup in France is on grass, and the 2023 Women’s World Cup – which is in the middle of a mysteriously delayed bidding process right now – has grass fields specifically listed as a requirement.

Now, the women are once again at a World Cup – their biggest stage, which comes around once every four years before most return to meager daily realities at the club level – dealing with terrible timing.

The Women’s World Cup final on July 7 couldn’t even be given its own day in the news cycle. CONMEBOL’s Copa America final is on the same day and Concacaf’s Gold Cup final is July 7 as well. Three finals. One day.

Concacaf president Victor Montagliani – who was Canada Soccer president for that 2015 World Cup – said recently, “It was simply an error” to schedule the Gold Cup final on the same day. There’s no way of getting around that answer meaning, ‘we’re oblivious,’ ‘we don’t care,’ or both.

VAR isn’t brand new to soccer, but it is to the players in this World Cup. The tweak to the goalkeeping rule is new to everyone. Even FIFA’s schedule for the World Cup was fouled up until, a few days before the draw on Dec. 8, it was pointed out to them that the knockout-round bracket was imbalanced.

FIFA president Gianni Infantino delivered a long speech at the first FIFA Women’s Football Convention in Paris on the morning of the World Cup’s opening match. He spoke of the great things FIFA was doing for women’s soccer, and how far the game has come. He championed the world governing body in what felt like a presidential rally, even inviting FIFA secretary general Fatma Samoura onto the stage to stand with him in an act of solidarity and in recognition of her work. Infantino spoke of FIFA investing $500 million into women’s soccer over the next four years.

The prevailing sentiment from that two-day convention was that talk is cheap, and action is needed. A plan is needed. FIFA last year released a women’s football strategy, though many felt it was light on detail. Money alone will not change the landscape. There are people within FIFA working to bring change, but it’s a slow process which requires more attention from the top. And the frustrating thing is that so many of these issues – the July 7 one as a prime example – seem to come down to a lack of planning and a lack of care.

First among anything FIFA does should be taking a proactive approach to the women’s game. Soccer – played by men or women – is soccer. Yet the women’s game continues to see its showcase event used as either a laboratory or an afterthought. It isn’t about whether you like VAR or not, nor is it specifically about one annoying rule. Referees are enforcing the rule as it has been written.

Timing is the problem. Timing of the final. Timing of VAR finally being approved. Timing of the rule change. A lack of time, explanation and experimentation are why players are leaving matches confused. That’s why nobody seems to know how to act on a penalty kick.

The lesson here isn’t so much, ‘careful what you wish for with VAR.’ The latest technology should be here at this World Cup. This problem is bigger than VAR. The problem is, once again, how hastily these things were handled. So here we are again, where the women are an afterthought at their own party.

Argentina come back to tie Scotland in emotional roller coaster of a match
Day 14: Cameroon advances at the death, Chile falls just short