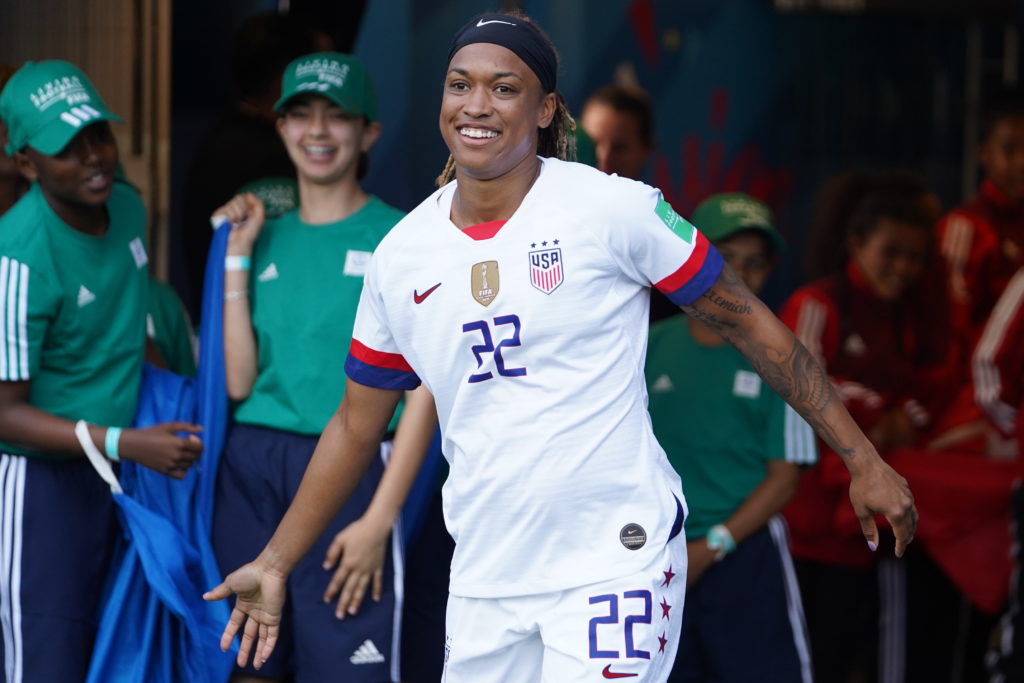 PARIS — It’s been more than 20 minutes since the final whistle and Jess McDonald’s hands are still shaking.

The striker has just made her World Cup debut — coming on at the half of the United States women’s national team’s 3-0 win over Chile. The accomplishment is a finish line, of sorts, for the 31-year-old journeywoman, who has played for eight different clubs in three different countries.

“Just finally getting there, across the line,” she told media after the match. “I finally got my foot in and it’s been really refreshing. Especially for my child, he’s seven now; he’s at an age where he’s going to remember all this.”

“Being able to inspire my kid with what I’m doing now, it’s going to help him succeed in the future and that’s one of my main goals here, to obviously succeed on the field and succeed as a mother,” she added.

While McDonald had seen national team call-ups before, in 2016 and 2017, she had fallen out of the national team picture for over a year when she approached her club coach, Paul Riley, last summer about her chances of getting back in with the U.S.

Riley — whom McDonald trusts for his honesty — told her that it didn’t seem like a realistic possibility. He told McDonald that it seemed like U.S. head coach Jill Ellis had already narrowed down her pool for the 2019 World Cup and that McDonald wasn’t a part of that picture.

But McDonald has never been one to give up quickly. Despite considering retirement on several occasions throughout her career, she never did, saying, “I didn’t want to give up so easily.” It’s a bold statement, especially considering the meager wages that professional players in America earn, and further complicated by the frequent moves and finding new schools and childcare arrangements for her son each time.

In North Carolina, however, and with Riley, McDonald has found a home and a place where she feels valued. So when Riley told her she didn’t have a realistic chance of making the World Cup team, she just shrugged her shoulders and kept plugging away. Last season, she helped the Courage to another NWSL championship, led the league in assists, scored three goals in the playoffs and won the MVP trophy in the final.

Her strong season then led to another chance with the U.S. last fall — the one Riley didn’t think was coming. Even more coincidentally, McDonald was with Riley when she got the call.

“[When] I got the phone call to go into November’s camp, I was actually with Paul in New York, which is so crazy. I was at his house. I said, ‘Paul, I got invited to camp.’ He [said], ‘Jess, you’re going to do great, you’re going to be just fine.’ He was very confident from that point on that I was going to be here [in France].”

McDonald also knew she needed to take the opportunity to prove she belonged with the national team.

“[Riley] kind of pushed me every single day and it’s because of him, the incredible coach that he is, the way that he pushes me in training, I wouldn’t be here without him at the end of the day.”

When Ellis told McDonald she was going in at halftime on Sunday, McDonald says she didn’t believe the coach at first. Then came the nerves.

“I was very nervous,” she explained. “It’s one of those moments that I’ve been waiting for my entire life. Not only just a phone call to come into the World Cup — which was a dream come true — but to actually step on the field was a whole other feeling and I was completely overwhelmed with joy.”

In the match, McDonald nearly scored, striking a shot off the post in the 62nd minute. She also credited the American fans for creating a great environment on the night.

“It was very exciting,” she said. “It was cool to get in there and the fan base was absolutely amazing. I think just that alone got our adrenaline going a little bit.”

“I [still] have goosebumps.”