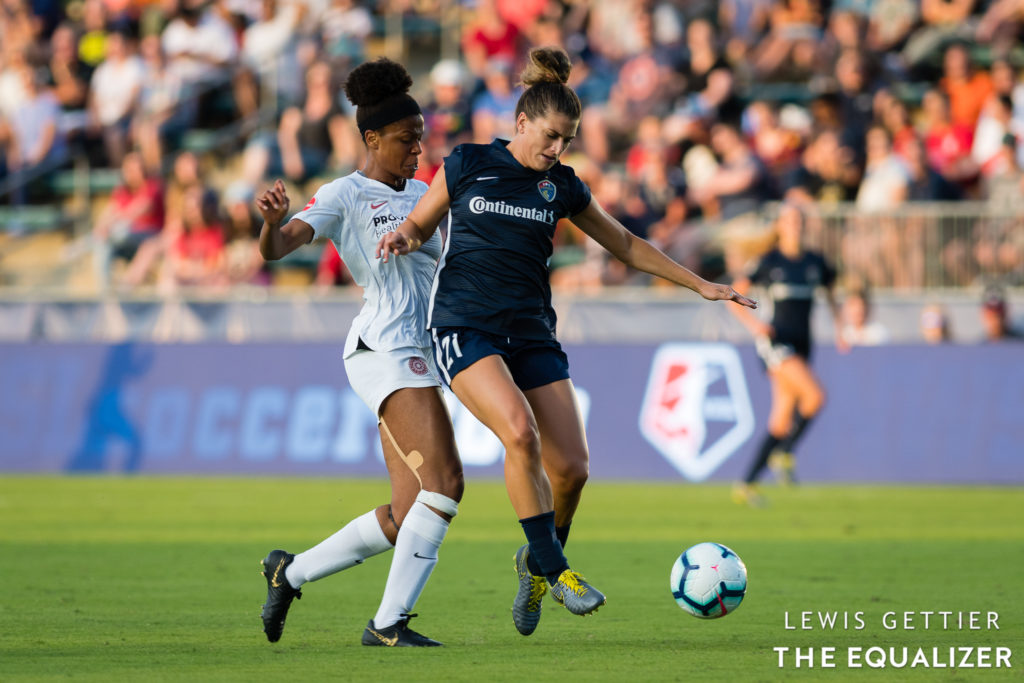 A match between the NC Courage and Portland Thorns FC in Week 9 of the 2019 NWSL regular season at Sahlen's Stadium at WakeMed Soccer Park in Cary, NC - Saturday, June 15, 2019. Photo by Lewis Gettier.

For the last time this season the Portland Thorns are on the East Coast — and it’s only June. Portland had their first six matches on the road this year and have wrapped up an East Coast trip against the North Carolina Courage. There’s history between these two sides. They both made the NWSL Championship game for the last two years, splitting the win. In the first meeting this season, North Carolina and Portland battled to a 1-1 draw.

Portland got the first goal, as Margaret “Midge” Purce scored a goal once again, running up her streak to three matches with a goal. Celeste Boureille nabbed the assist, but it was all Purce who did the work. With a defender right next to her, Purce noticed Sam Leshnak — who got her second-straight start in goal — come off her line. Purce chipped the ball over Leshnak and into the net.

.@100Purcent stays on ???! She nets the game's opening goal and has now scored in three straight.

However, Purce’s goal wasn’t the only head-turner. Julia Spetsmark, the Swedish international, scored her second goal in a Courage uniform in the 59th minute. Merritt Mathias found her toward the box and Spetsmark leaped into the air for an acrobatic-kicking goal.

North Carolina and Portland are right next to each other in the standings. The Thorns are in second place with 15 points, but the Courage aren’t far behind as they sit with 13 points in third place.

We see you, @JuliaSpetsmark! @TheNCCourage has their equalizer via a top-class finish.

The Orlando Pride are still looking for their first victory of the 2019 season. However, the Pride were able to earn their second draw of the season, breaking a five-game losing streak. Meanwhile, the Houston Dash, who faced the Pride at home, have been lopsided this season. In their last three matches, Houston earned a win, loss and draw.

Saturday night’s 2-2 draw saw an opening goal on the road from Orlando by Joanna Boyles. However, Orlando then gave up two unanswered goals to Sofia Huerta and Kristie Mewis. The goals were scored within 20 minutes of each other. Mewis’ goal was her first since returning from an ACL injury.

Joanna Boyles has @ORLPride up early with a sensational free kick!

However, the Pride weren’t finished and wanted to steer clear from a sixth loss. Dancia Evans entered the match in the 70th minute for Bridget Callahan. Only one minute later, Evans scored on her first touch. Chioma Ubogagu began the play by working the left side of the pitch and passed to Boyles to keep the play onside. Boyles was the one who found Evans inside the box.

.@schuerta finishes from an easy tap in after great work from @KealiaOhai to pull things level for @HoustonDash.

The Pride are still in last place and will wait another week to hunt for that elusive first win. Their next contest is against Sky Blue FC, who is only one spot ahead of them in eighth place. Meanwhile, the Dash currently sit in fifth place with 12 points. They’ll face off with the Washington Spirit next weekend.

.@KristieMewie sends a low strike into the back of the net to put @HoustonDash ahead!

.@HoustonDash's lead is short-lived as @danicaevans7 finishes from close range to even the score again!

Jess Fishlock hit the equalizer in the 77th minute to help Reign FC escape with a 1-1 draw against the first-place Washington Spirit. Fishlock made a dramatic return to the pitch after crashing on her left side earlier in the second half and walking off with her left arm pinned to her body and appearing to not want to move it at all. It was Fishlock’s first goal since returning from her loan stint at Lyon.

The Spirit struck first in the 62nd minute when Andi Sullivan took a pass from Cali Farquharson and beat three Reign before scoring at an off angle.

The Reign (2-1-5, 11 pts) remain in seventh place but well within striking distance of the top four. Next up is a Sunday, June 23 visit to Chicago. The Spirit (5-1-2, 17pts) remain on top of NWSL and host the Houston Dash next Saturday.

Amy Rodriguez scored her fifth goal in her last six games in the 16th minute and Utah Royals FC held on for a 1-0 victory over Sky Blue FC on Saturday at Rio Tinto Stadium. Rodriguez, who had missed wide on a clear chance minutes earlier, swooped in to win a 50/50 ball being fought for in midfield. She then beat a defender into space and dribbled at the Sky Blue back line which receded in mass, giving Rodriguez even more space.

Rodriguez elected to wind up and fire from distance and placed her shot perfectly where it beat DiDi Haracic.

Sky Blue made things difficult on the Royals, particularly near the end of the first half after Vero Boquete had to be subbed off with what looked like an angle injury. Royals goalkeeper Nicole Barnhart needed five saves to earn the clean sheet.

The Royals (5-2-1, 16 pts) moved within a point of first place. They will visit the Thorns on Friday night. Sky Blue (0-6-2, 2 pts) will return to New Jersey for a battle of winless sides against the Orlando Pride next Saturday.

No World Cup, no problem for longtime Japan stalwart Yuki Nagasato
The Equalizer Podcast, Episode 64: All According to Plan