How much run will Ellis give USWNT bench players? 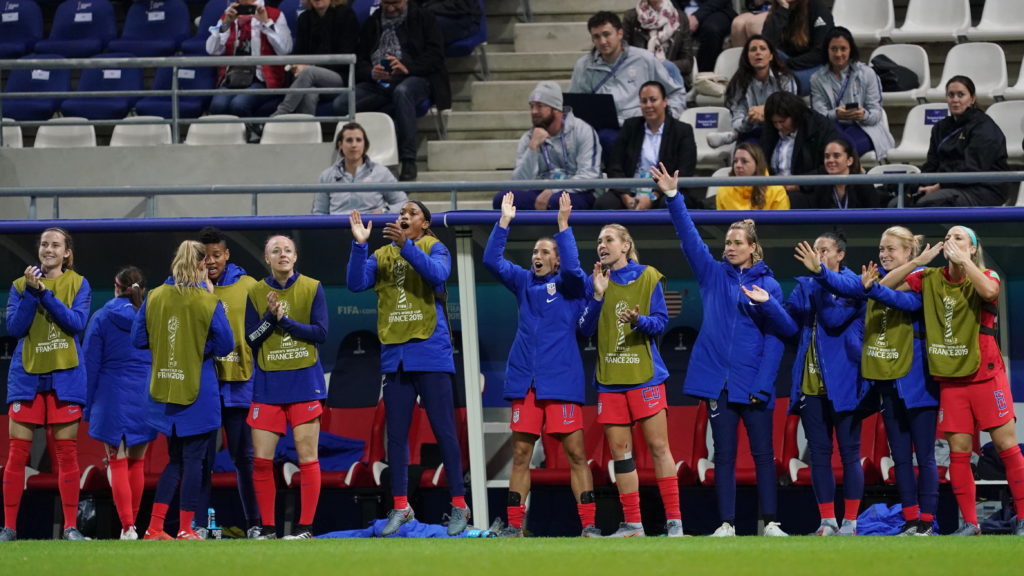 If the United States women’s national team hopes to make a deep run in the 2019 World Cup, hundreds of tiny details must go according to plan. On the field, the players will have to finish their chances in front of goal, limit giveaways in transition and avoid defensive errors that lead to opposition goals. Off the field, another series of hurdles await, including proper rest, the right nutrition and managing sound recovery protocols in between games.

Many of these details fall to the players themselves and the team’s support staff. And over the years, a number of stories have been written about small advantages the team seeks out by bringing along their own pillows, hiring chefs to travel with the team on road, as well as the technological and scientific methods Dawn Scott, the team’s strength and fitness coach, uses to give the team any possible edge.

Still, a great deal of the team’s ability to stay fresh through the tournament will ultimately fall on the shoulders of head coach Jill Ellis and her ability to manage the squad’s minutes and workloads through the U.S.’ early matches.

One strategy through the group-stage would be to rotate her squad, giving different players starts in different matches throughout. However, this would also disrupt the cohesion of the first XI. Another strategy would be rotating the entire starting XI for one of the team’s first three matches—a tactic Ellis used this past fall during qualifying. Finally, she could plan out her substitutions for the entire group-stage ahead of time, rotating which players she subs off in order to limit their mileage before the knockout round begins.

However, while Ellis said she’s been thinking about how to best rotate her squad, she also says that adaptability is key.

“We characterize it as a three-game mini-tournament,” explained the coach ahead of the team’s match against Thailand. “Certainly, you can’t get beyond the first game [and] I’ve said this to the players and myself, there are so many twists and turns in this plot. You just have to be ready to tack, absorb and examine what’s in front of you. To get too far ahead I think can be problematic in terms of looking beyond what’s in front of you.

“Right now it’s selecting players for [each] game and then after that you evaluate and move forward. I think you have to approach it that way because there are so many unknowns out there.”

In the team’s first match, Ellis decided to sub out starters Julie Ertz, Tobin Heath and Rose Lavelle in the second half with the Americans then holding a 7-0 lead. The question now becomes who she will rotate in the starting lineup or sub out against Chile in Sunday’s game.

During Saturday’s pre-game press conference, Ellis was coy when asked about who she might rotate on Sunday. However, she did speak confidently about her depth earlier in the week.

“I feel very confident in our preparation for the unknowns,” she said. “We’ve had players play [different] positions if needed to, we’ve had [many] players get a lot of playing time and I think we’ve got a group that’s pretty well vetted in terms of the minutes and the cohesion and the understanding of what their roles and responsibilities are on the field.

“I can say this comfortably—I would feel confident putting any one of the 23 players out there. That’s why they were selected, to be ready for this moment. In terms of beyond tomorrow night, we’ve got to wait and see.”

Of the eight players who went the distance against Thailand, the most obvious candidates for limited minutes against Chile would be Kelley O’Hara, Lindsey Horan and Megan Rapinoe. O’Hara’s full-game effort against Thailand is certainly reassuring to U.S. fans after the defender’s long-running battle with an ankle injury, but subbing her out for the last 30 minutes on Sunday would be a good way to keep her ready to go deeper into the tournament.

Rapinoe and Horan also missed club matches this spring with a calf and hip injury respectively, and should be prime candidates for rotation or an early substitute for the same reason.

While Chile shouldn’t represent any real competition for the Americans, Ellis does need to keep an eye on the U.S.’ last game in group play—next Thursday—against Sweden. This will be, by far, the Americans’ toughest competition in the group.

The game against the Swedes, who infamously defeated the Americans in the 2016 Olympic quarterfinals, will almost certainly not end up deciding advancement out of group play, but it does represent a key opportunity to get the team one solid World Cup test before the knockout round begins.

The last time the U.S. played a team ranked in the top 15 was against Australia in early April, and getting her top group a full 60 minutes together against Sweden is a good chance for Ellis to kick the tires one last time before the squad’s Round of 16 match, likely against Spain or Canada.

Day 9: The Dutch move on to knockout rounds with victory
Get in formation: Canada stifles New Zealand with 3-5-2