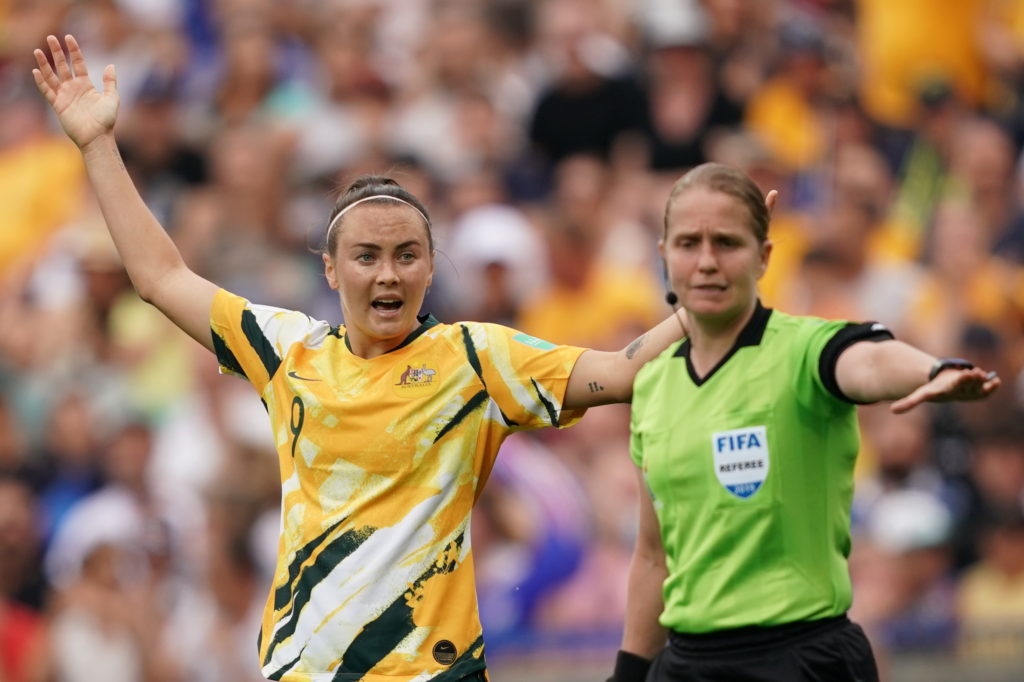 MONTPELLIER, France — If the Australia team forecast to be the most exciting attacking team at the tournament disappointed with a flat-looking loss to Italy, their roller coaster of a win against Brazil will have put to rest fears of a boring World Cup — but it did little to reassure us against an early exit.

In the wildest game of the tournament so far, the Matildas managed to claw their way — partially through luck, partially through good old-fashioned hard work — out of a two-goal deficit. It was a game that many had picked to be a highlight of the group stage, and for pure entertainment value, it didn’t disappoint.

“It was pretty intense,” said Austrlian attacker Caitlin Foord after the game. “It was a fast-paced game, [we’re] still on a high, obviously to get that win, it meant a lot to us.”

Sam Kerr didn’t score in this game, but she did, as if by magic, cause two goals by sheer force of reputation. The first came when Brazilian center backs Kathellen and Monica were both so laser-focused on marking her they did nothing to stop Chloe Logarzo’s long-range strike, and the second occurred when Monica headed the ball into her own net while trying to beat Kerr.

“She obviously brings that effect,” Foord said. “She pulls players in, and they know if she gets a touch it’s going in, so they’ve got to get something on it, and that’s what can happen.”

The comeback win was a treat for the small army of Australians who made the trip to Montpellier, often breaking out “Waltzing Matilda,” the song the team gets their name from, en masse.

And there were highlights on Brazil’s side, too. Marta made history with her first-half penalty, becoming the only player ever to score at five World Cups, and drawing level with German Miroslav Klose for most goals scored in World Cup play with 16. While celebrating, the Brazilian legend pointed to her shoe, adorned with an equal sign, in a protest against inequality on the sport’s biggest stage — a moment deserving of a deeper analysis that will have to wait for another article.

Cristiane’s goal, too, if less historic, continued to show the 34-year-old is far from over, despite walking away in protest of the team two years ago. She lurked behind Steph Catley (being played out of position at center back with Clare Polkinghorne on the bench) and snuck loose for a well-executed header to put Brazil up 2-0. Catley praised the veteran forward after the game, saying, “[she] knows how to use her body; she’s so smart.”

That moment, though, also highlights one of the cracks in this Australia team — playing Catley, one of the best fullbacks in the world, at center back, is a move that smacks of some real desperation. Catley admits she’s not yet fully comfortable in that position, saying, “That second goal, I should have attacked the ball and that’s really a center back movement that I should know better.” The team says Polkinghorne sat due to a sore hamstring, but it’s also true that she was poor against Italy, essentially handing them a goal via a careless pass.

All this was expected. We knew going in that Australia’s defense was a weak point. But if we were hoping to see the Australia team that conceded five but also scored three against the US earlier this year, it doesn’t look like that team showed up for the World Cup, either. Despite the win, this team is not playing to their potential, lagging not just defensively, but going forward as well.

Australia doesn’t just have the best player in the world in Kerr, but another of the most exciting, dynamic attacking talents in the game in Foord. We’ve seen these players absolutely tear defenses apart — including that of the top-ranked Americans — with their movement, hold-up play, and passing. They both excel for their club teams not just in scoring, but in dropping back to connect with the midfield. Yet they were deployed, bafflingly, as target strikers in this game, finding themselves completely isolated from an outmatched three-woman midfield as they floated around near Brazil’s back line.

This makes sense, to some extent. Brazil, putting five players in the midfield whenever Australia tried to play out of the back and pressing their opponents aggressively in the middle of the field, was intent on not letting the Matildas play. It’s also true that Brazil’s back line is their biggest weakness. “We’ve played Brazil many times before,” said Foord, “and that’s how we’ve scored a lot of our goals against them, turning them around and getting balls in behind.”

What makes less sense is the specific way Australia was direct. Their offense, for long stretches, consisted entirely of aimless crosses from the right by Emily Gielnik. In the second half, they went to a 4-4-2, likely to try to compensate for that numerical imbalance — but, frustratingly for anyone who has watched Kerr and Foord in the NWSL, did it by moving Gielnik back into the midfield. The fact that this worked, in the sense that Australia won, doesn’t mean it was a good plan.

Kerr and Foord weren’t the only players being underutilized, either. The relentless directness did a disservice to Emily Van Egmond and Tameka Yallop, too, both of whom were too stranded in traffic to make much of an impact on the game.

Kerr may continue to carry this team, either through the pure magnetic force of her notoriety, or by actually scoring goals. But sooner or later, that’s not going to be enough, and we’re all going to wonder why this talented Australia team couldn’t put the pieces together.