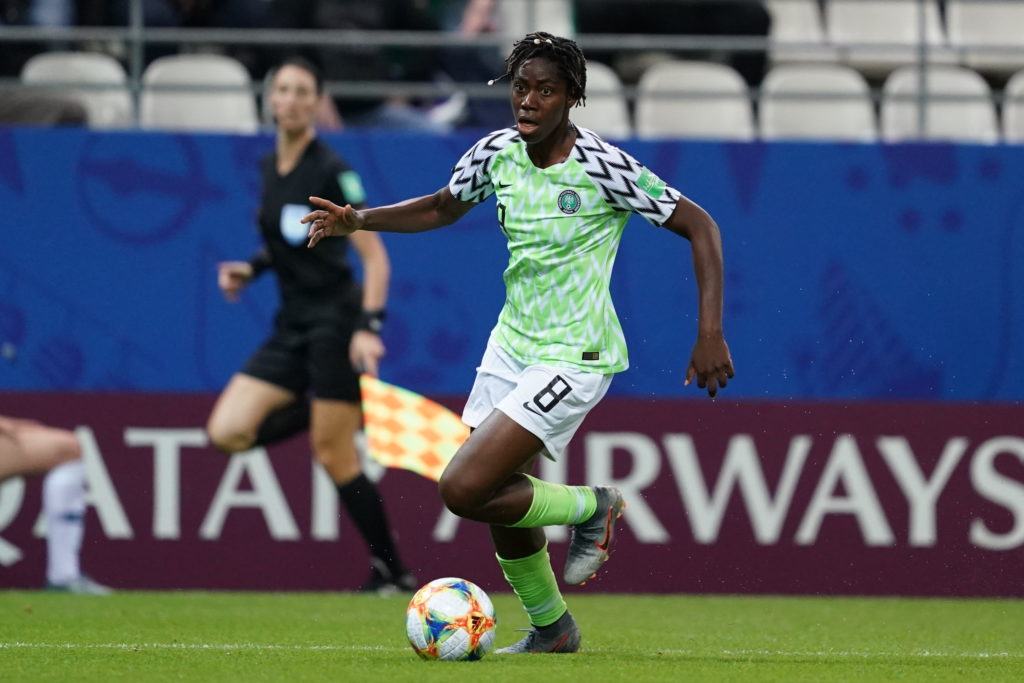 Asisat Oshoala gave a breath of new life to the Nigerian Super Falcons with a 2-0 victory over South Korea to help boost their chance of getting to the knockout rounds. Photo courtesy of Daniela Porcelli/Joerdeli Photography.

In the battle of Group A, it almost seems certain that France will win the group. However, the second and third spots are completely wide open. Norway certainly had a good showing against Nigeria, but they still have to play the hosts and South Korea can always cause trouble. However, the Koreans had to cause trouble against Nigeria to show any sign of making it out of the group. Instead, the Koreans fell to the Nigerians, 2-0, on Wednesday.

An own goal from Kim Doyeon in the 29th minute didn’t help the Koreans by any means. Doyeon was attempting to clear the ball away from a Nigerian attack, but the ball bounced off her foot, hit the pitch a couple times and then rolled past goalkeeper Kim Minjung. Nigeria put the final nail in the coffin in the 75th minute when Asisat Oshoala scored the game-winning goal.

Did VAR get the call right?

South Korea's own goal stands after review decides the ball was not handled by Nigeria's Desire Oparanozie. pic.twitter.com/qJGMncCMkF

The Barcelona forward almost had a second goal minutes later, but took a heavy touch to see the ball roll out of bounds. Nigeria will hope for a miracle when Norway and South Korea face each other in the final bout of group stage matches. Next up for the Super Falcons is a tough task against the host nation of France.

WHAT A GOAL BY OSHOALA ?

Nigeria go up by ✌️ pic.twitter.com/LdkC5HpRWa

In a physical contest in the middle of rain, Germany edged out Spain for three points to take the top spot of Group B. The hero for Germany was 24-year-old Sara Däbritz. The Bayern Munich midfielder found the rebound of a save from Spanish goalkeeper Sandra Paños and put it in the open corner of the net. Paños initially made a save against German captain Alexandra Popp, who knocked a header right to the goalkeeper.

Meanwhile, Spain had chances to equalize. Throughout the second half, Spain found more of the ball but couldn’t finish their shots. Spain finished the match with 15 shots, but only two registered on goal.

With the victory, Germany has taken full control of Group B. They currently sit on top with six points, while Spain is right behind in second place with three points. China and South Africa — who face off tomorrow — have yet to record a win.

Spain fail to clear the ball after the initial save by Paños and Sara Däbritz pounces for the opening goal. pic.twitter.com/hzeQLofLWD

In what will likely be their toughest challenge in the group stage, France won a wild game against Norway tonight, marked in equal parts by good attacking play, uncharacteristic mistakes, and plain old luck.

Although France had the lion’s share of scoring opportunities, posting 16 shots to Norway’s 6, the home team struggled with their finishing and was unable to put anything away in the first half. Kadidiatou Diani was particularly active in the attack, repeatedly dribbling past Kristine Minde to send crosses into the box from the right—but striker Valerie Gauvin generally couldn’t get on the end of those balls, and didn’t shoot well when she did.

Finally, just a minute into the second half, Gauvin found a goal, putting away a cross from Amel Majri on the left. The lead wasn’t to last long, though, and despite a few promising-looking counterattacks orchestrated by the likes of Caroline Graham Hansen and Guro Reite, Norway’s equalizer came from the least expected place: an own goal by Wendie Renard.

If there were hints France was getting more and more frustrated—Eugenie Le Sommer, who was largely quiet in the offense, saw yellow—they kept attacking, and their persistence paid off when Ingrid Engen fouled Marion Torrent in the box for a penalty (awarded via VAR, naturally). Le Sommer stepped up to the spot and slotted it into the lower left-hand corner to put the game away.

FRANCE ARE IN FRONT AGAIN!

VAR awards a penalty and Le Sommer sends it home to put France back on ? pic.twitter.com/T7eQXyZKTq