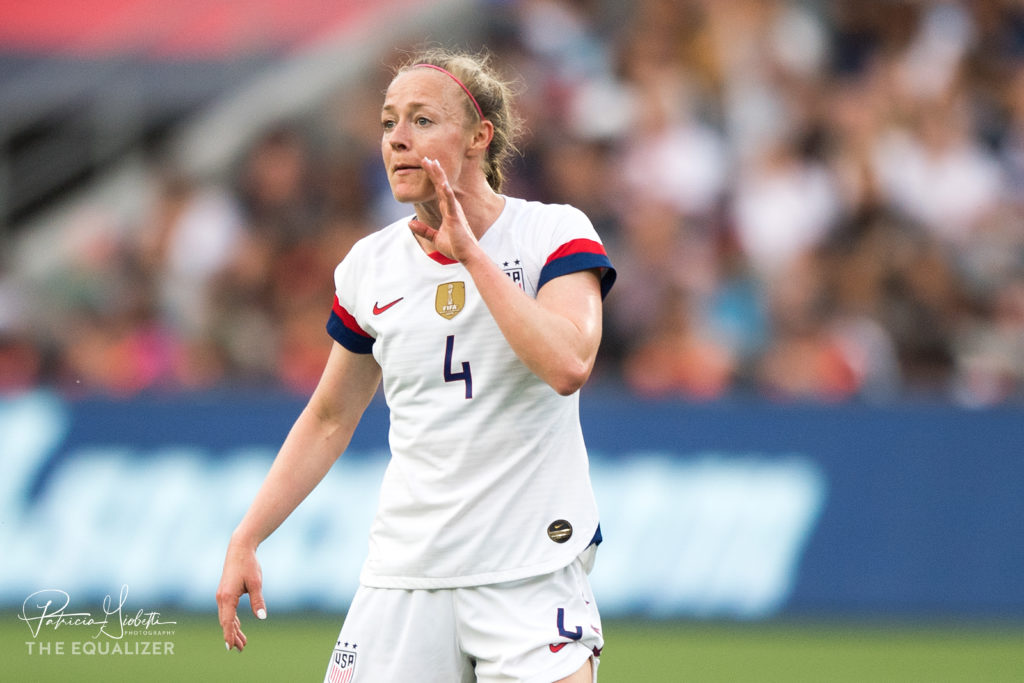 It’s been an occasionally tumultuous four years for the World Cup holders. The afterglow of a cross-country victory tour rapidly gave way to an abrupt quarterfinal loss to Sweden at the 2016 Olympics and a controversial split with longtime goalkeeper Hope Solo, followed by an extended period of experimentation which saw Jill Ellis call up 61 different players in two-and-a-half years. The choppiest waters came in 2017, when the team briefly ceded their world No 1 ranking to Germany after suffering two defeats on home soil: to England and France during a last-place finish at the SheBelieves Cup and the team’s first ever loss to Australia in the Tournament of Nations. (And that’s not even including the wage discrimination complaints and contentious collective bargaining agreement negotiations that have often overshadowed the results on the field.)

But Ellis finally settled on a 4-3-3 formation constructed around a number of mainstays: goalkeeper Alyssa Naeher (who beat out Ashlyn Harris for the starting job), the central defense pairing of Abby Dahlkemper and Becky Sauerbrunn, Lindsey Horan and Julie Ertz in the midfield and Megan Rapinoe and Alex Morgan up front. The result? A 28-game unbeaten run that ended only in January.

A swashbuckling, attack-first style marshaled by Rapinoe, Morgan, Tobin Heath, Mallory Pugh, Christen Press and old warhorse Carli Lloyd suggests the Americans will have no problem scoring goals in France. Whether they can keep their opponents from returning the favor often enough is the far more pressing issue. They opened the calendar year with a patchy record of two wins, two draws and one loss, including back-to-back games with multiple goals conceded for the first time since 2011. Naeher, always somewhat inconsistent for country, has been done no favors by a back line thin on depth and experience: starting right back Kelley O’Hara has been troubled by injury and left back Crystal Dunn is playing out of position.

That’s not to say Ellis’ side doesn’t enter the tournament as favorites on merit, but matching the 540 minutes without conceding a goal they managed in the 2015 World Cup feels highly unlikely.

In the end Ellis’s roster for France drew overwhelmingly from the core group that emerged during the team’s unbeaten 2018. The Portsmouth-born coach has taken a bit of criticism in the final run up to France for tinkering with formations and grooming players into new roles when consistency should be the focus, but this is an experienced team – more than half of the 2015 squad is back for the title defense – that should be ready for what’s afoot when the games start in earnest. The biggest tactical question is whether the U.S. will be able to break down bunkers against inferior teams with the ability to counter: they struggled to crack the code for a long stretch in the friendly win over South Africa, same as against Sweden in the Rio Olympics.

Take your pick from the United States’ embarrassment of attacking riches. No fewer than a half-dozen of the forwards in Ellis’s squad would play a feature role for any team in the tournament, including Morgan, Heath and Pugh. But 33-year-old Megan Rapinoe, whose creative verve at the Rio Olympics was stunted as she recovered from a third ACL injury, remains the straw that stirs the drink for the United States up top.

Right back Ali Krieger and backup keeper Ashlyn Harris, who confirmed in March they are engaged to be married later this year, are thought to be the first publicly out engaged or married couple to play on the same national team for the United States. Married field hockey players Kate and Helen Richardson-Walsh represented Great Britain together at the Rio Olympics.

A brief history of women’s football in the United States

The 1972 passage of the federal legislation known as Title IX – the law that makes it illegal to discriminate on the basis of sex in any federally funded activity – created opportunities for girls and women to play sports that gave the United States a head start on the international scene.

The US women’s national team didn’t play their first game until 1985 – a 1-0 defeat to Italy in the Mundialito tournament after coming together on less than a week’s notice – but a Michelle Akers and Carin Jennings inspired squad captured their first World Cup in 1991. The second in 1999 – famously capped by Brandi Chastain’s shootout-clinching penalty against China in front of more than 90,000 fans at the Rose Bowl – was an epochal moment in American sports, driving youth participation in girls’ soccer to untold heights and inspiring a new generation of athletes that have endowed the United States with one of the world’s deepest talent pools.

The results speak for themselves: the United States have won three World Cups and never finished worse than third in the tournament, adding four Olympic gold medals along the way.

Which player is going to surprise everyone at the World Cup

Rose Lavelle. Hamstring injuries have limited her involvement over the last two years, but Ellis will be counting on the stylish, 24-year-old playmaker and World Cup debutante to provide a vertical presence in the midfield and break open opponents’ back lines with her creativity, vision and technical skill.

What is the realistic aim for the United States in France and why?

Given the athleticism, depth and experience of the United States make them no worse than joint favorites with the hosts, anything short of a fourth World Cup would be a disappointment. That said, a showdown with Les Bleues will take place in the quarterfinals – at Parc des Princes in Paris on 28 June – if both sides win their groups as expected.

According to last year’s audited financial statements, US Soccer’s annual spend on the women’s national team was $17.1m out of a $71.9m annual budget, not including the $1.7m allocated for the National Women’s Soccer League.

US Soccer frustratingly does not offer gender breakdowns for their 4.18m registered players and 9,000 affiliated club teams. The last accurate accounting came during FIFA’s Big Count in 2006, when the governing body reported 1.67m registered female players, nearly twice the next closest nation (Germany).