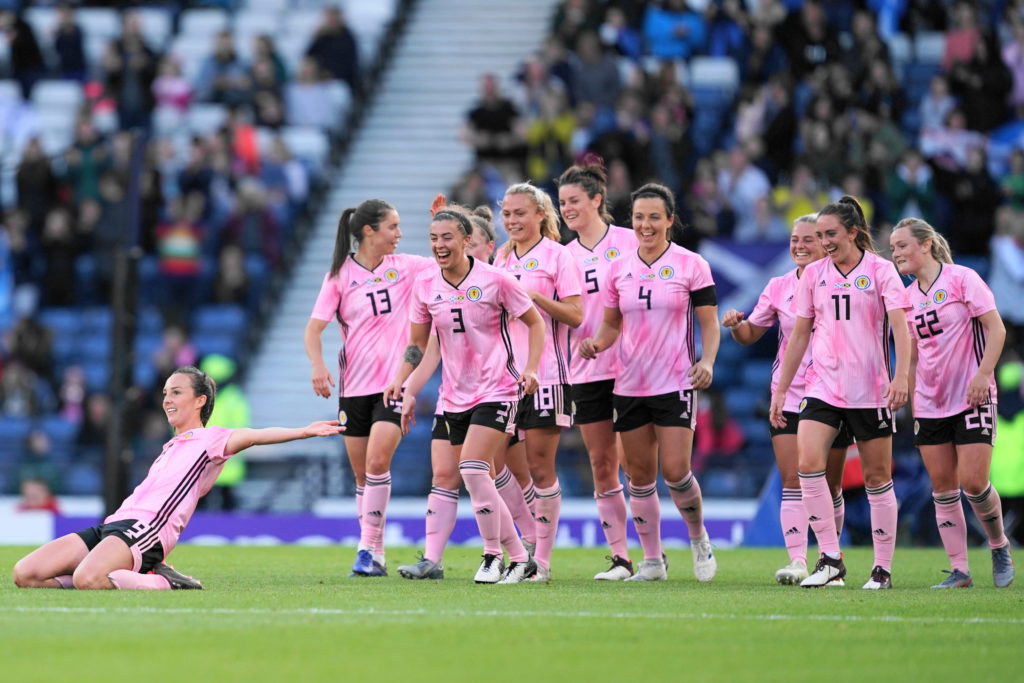 Scotland’s second consecutive qualification for a major tournament is no accident – the team is awash with top talent. Having qualified for Euro 2017 by finishing second in their group with seven wins and one defeat, they were hit by an injury crisis that crippled their campaign in the Netherlands.

Arsenal midfielder Kim Little and Manchester United’s Lizzie Arnot (then at Hibernian) suffered ruptured ACLs, and Arsenal’s Emma Mitchell and Manchester City’s Jen Beattie also missed out. A brutal 6-0 defeat by England in their opening Group D fixture followed, with the forward Jane Ross damaging a shoulder to further deplete the ranks. A 2-1 loss to Portugal then a 1-0 win against Spain almost saw them scrape through to the quarterfinals as they finished level on points with both, but Spain progressed with a superior head-to-head record.

Following the disappointing display, then head coach Anna Signeul made way for the former Arsenal manager Shelley Kerr, who immediately commissioned a full report into the team’s performance at the Euros.

Scotland’s passage to this World Cup finals was not easy. Only top spot in the five-team groups guaranteed qualification and they secured that on the final day. With Switzerland dropping points against Poland, goals by Little and Ross ensured a 2-1 win against Albania and a first World Cup.

The players included in Kerr’s squad from the Women’s Super League in England include the title winners Little, Mitchell and Lisa Evans, cup double winners Beattie and Caroline Weir, Champions League semifinalist Erin Cuthbert and FA Cup finalist Ross. A number come from the top two SWPL teams Glasgow City and Hibernian, and the captain, Rachel Corsie, plays for the Utah Royals in the National Women’s Soccer League. These are players who know how to win.

On paper, the starting XI is strong enough to beat any team. A positive performance in a 1-0 defeat by the reigning champions, USA, in their final friendly of 2018 hinted at the potential. Keeping players fit will be vital. They lack the squad depth of the top nations and that was exposed in the Netherlands. But if luck is on their side on that score, they are not the underdogs that many are labelling them.

As in 2017, they open against England. But with tournament experience now under their belt and the fire of revenge in their bellies the score is unlikely to be as emphatic as that 6-0 defeat.

Shelley Kerr was appointed following Scotland’s disappointing Euro 2017 campaign and has led the team to their first World Cup. Having managed Arsenal from February 2013 until the end of the 2014 season, where she picked up consecutive FA Cup trophies, Kerr became the first female manager in British men’s senior football when she was appointed manager of Stirling University in the Lowland League.

Kim Little missed out on Scotland’s first major international tournament, the 2017 European Championship finals, having suffered an ACL injury, but she is fit and ready to show why she is one of the world’s best players now. Having had her leg broken in Arsenal’s 5-0 demolition of Chelsea in October, many feared the worst, but the 28-year-old made a quicker-than-expected recovery and returned to pull the strings and control the tempo of Joe Montemurro’s side as they battled to their first title in seven years.

When Manchester City’s Claire Emslie and Birmingham’s Chloe Arthur played together at Bristol City, they also spent time working together in the bar of a five-a-side venue. The nicknames “Lime” and “Soda” were adopted, and stuck, and the pair have promised to wear the names on their boots in France.

The first records of women’s football start in Scotland. In the Highlands, single women would play against married women while men would watch and select a prospective bride. Much later, Easter Road hosted the first known match played under FA rules between England and Scotland in 1881. With women drafted into the factories during the war, munitions teams cropped up and in 1918 an unofficial game with England at Celtic Park attracted 8,000 people. However, the SFA banned women’s football in the 1920s, as the FA did in England.

It was not until 1974 that the SFA gave token recognition to the Scottish Women’s FA. During that time, Rose Reilly and Edna Neillis moved to Italy in search of semi-professional football. Reilly played for nine Italian clubs winning eight league titles; she took Italian nationality and went on to win the Mundialito Femminile in 1984. The SFA took charge of women’s football in 1998. Although the SWPL is not at the level of the WSL in England, huge strides are being made. Celtic announced in December that they would establish a full-time professional side, and Rangers announced increased funding.

In addition, the Scottish government has provided around £80,000 to allow national team players to train full-time in the run-up the the World Cup.

Erin Cuthbert. Chelsea’s manager, Emma Hayes, has run out of superlatives for Cuthbert, a 20-year-old forward. “You dream about players like this coming around – full of heart, desire, determination,” she said after the player scored either side of half-time in a 2-1 defeat of Arsenal in January. The striker has 13 goals in all competitions, including a goal against Lyon at the Groupama stadium in the Champions League semifinal first leg.

What is the realistic aim for Scotland in France and why?

The team’s aim is to get out of the group and, while a tough challenge, that is not impossible. The squad going to France is significantly stronger than the one at Euro 2017 and could cause an upset or two. The four best third-placed teams will advance to the round of 16 and with Argentina by far the weakest team in the group there is a real chance for Scotland to get through.