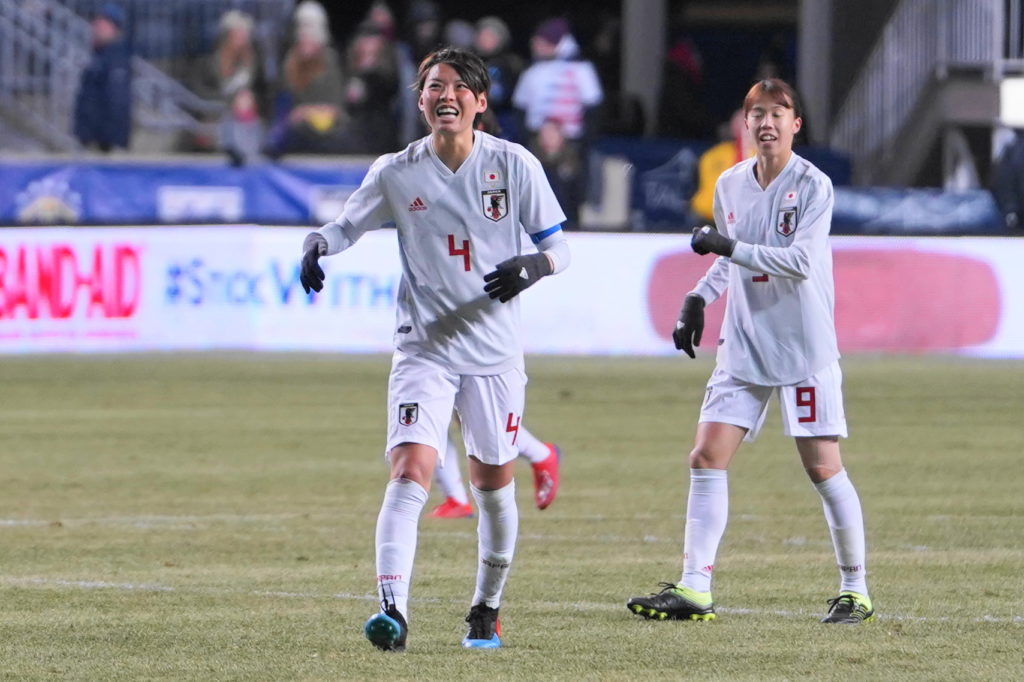 The Japanese team that won the 2011 World Cup became a symbol of the nation’s recovery from the devastating earthquake and tsunami earlier that year, as well as an inspiration for women’s football around the globe. This has since been followed with World Cup glory at Under-17 level in 2014 and at Under-20 level in 2018, making Japan the only country to be crowned as world champions in every single category.

A number of younger players from the 2011 generation have matured to provide the current side with leaders in every area of the pitch, including defenders Saki Kumagai and Aya Sameshima, midfielders Mizuho Sakaguchi and Rumi Utsugi, plus forward Mana Iwabuchi. They are joined by a new crop with plenty of full international experience already, such as Moeka Minami in defense, Yui Hasegawa and Hina Sugita in midfield, and Rikako Kobayashi up front. Around half of this summer’s squad have previously played in World Cup finals at either senior, Under-20, or Under-17 level.

Japan line up in either an orthodox 4-4-2 or a 4-2-3-1 formation, with a style of play underpinned by hard work and good technique. The world champion teams across the different age groups all demonstrated an ability to punish opposing weaknesses with patient buildup and coordinated pressing. But in a modern world where tactical trends are increasingly homogenized, Japan no longer possess the kind of qualities to stand themselves apart in the global market.

Their interplay and skill level is seldom superior to top class opponents as it may once have been, and as such the defense has a tendency to break down against physically stronger attackers.

In attack the manager, Asako Takakura, preaches a flexible, varying style of play in which players are encouraged to take decisions according to the situation – one individual action should determine the next. When it works, it can be terrifically entertaining, but when it doesn’t, it can appear little more than haphazard and random. Certainly, the team does not tend to create many chances. Since Takakura took charge, Japan had – by mid-May – a record of just three wins, five draws, and 11 losses against sides in the top 10 of the FIFA rankings; while conceding first is a near guarantee of defeat with no wins, only one draw, and 13 losses on such occasions.

The top priority at this World Cup, then, should be to keep clean sheets and try to ensure they can take advantage of whatever few chances come their way. Japan will hope that strong patience might bring another miracle in the tradition of the legends of 2011.

Asako Takakura was a midfielder throughout her playing days in the 1980s and 90s, winning 79 caps for the Japanese national team. In 1989, she scored the first ever goal in the newly established Japan Women’s Football League (now Nadeshiko League). After hanging up her boots she coached at soccer schools, before taking charge of the Under-17 national team in 2013 and leading them to a first ever FIFA U-17 Women’s World Cup triumph a year later. She was appointed as manager of the senior side in May 2016, with a record of, by the time of writing, 22 wins, seven draws, and 14 losses.

Emi Nakajima went to the same school (Shiga Yasu High School) as Takashi Inui, who played for Japan at the men’s World Cup in Russia last year. But in the absence of a girls’ football team there, she had to travel over an hour every day to play for a club in Osaka instead. After graduating from high school in 2009 she signed for INAC Kobe Leonessa where she quickly became a favorite of her teammates, and 2011 FIFA Women’s World Player of the Year, Homare Sawa. Capable of accurate set pieces and long-range shots with either foot, Nakajima will be featuring at her first World Cup.

Goalkeeper Ayaka Yamashita used to play up front until switching positions in high school. The intended No. 1 had opted to join another club and left the team without anyone to go in goal. Yamashita planned on filling in for a while before quitting the sport after school, only it transpired she had a hidden talent which ultimately led her to the senior national team.

Midfielder Hikaru Naomoto has a phobia of stink bugs, a family of insects found in Asia and known for their distinctive odor. The trouble is that stink bugs seem to be rather fond of her. The relationship dates back to a football match at elementary school when one flew into her mouth; she played on despite numbness in her tongue. Naomoto claims that the insects always settle on her laundry when she hangs it outside, while their recurrent appearance in dreams keeps her up at night.

A reference to ‘football’ in a 1906 sports day program at Marugame High School for 12-to-16-year-old girls in Kagawa Prefecture is the oldest known record of women’s football in Japan. A number of women’s clubs were established throughout the country in the 1960s and beyond, with the first national Women’s Football Championship (now known as the Empress’s Cup) held in 1980. A selection of players from leading clubs in each part of the country were assembled to form the first Japan women’s national team a year later, and competed at the 1981 AFC Women’s Championship where they finished fifth out of eight entrants.

Japan took part at the first Women’s World Cup and have since been ever present. Despite recording just three wins in the first five editions, a first ever victory over the host nation Germany sent them on the road to glory in 2011. In the final against the United States, they won on penalties after a 2-2 draw in 120 minutes. This was followed by runs to the finals at both the 2012 London Olympics and the 2015 World Cup, but Japan failed to reach Rio 2016 after losing in the Asian qualifiers.

The domestic league was launched in 1989. The national team manager Asako Takakura’s old club, Nippon TV Beleza, have been champions 16 times in 30 years, including each of the last four seasons. The Japan squad at this year’s World Cup has, unsurprisingly, a large Beleza contingent.

There are several options in the Japanese team. Kumi Yokoyama is a real threat to defenses, capable of dribbling through tight spaces and shooting when opponents least expect. Hina Sugita is the winner of the Golden Ball at both U-17 and U-20 World Cups. She is excellent at finding space between opponents. Finally, Yui Hasegawa is an intelligent player seen as the successor to Aya Miyama. She reads opponents’ intentions and moves quickly to take advantage.

What is the realistic aim for Japan and why?

Round of 16. Japan have a record of 22 wins, seven draws, and 14 defeats under Takakura, but this drops to just three wins, five draws, and 11 defeats against opponents ranked in the FIFA top ten. Not once have they ever successfully come from behind to win a game. Perhaps a semifinal appearance might be possible only if they shift to a more pragmatic, defensively-oriented approach.

The only figure officially published by the Japan Football Association (JFA) is 4.4 billion yen (about $40 million) for ‘expenses related to national teams’ – which include men’s and women’s national teams for football, futsal, and beach soccer at all age levels.

Approximately 28,000. Note this figure does not include female players who play in mixed-sex teams; once included, there are an estimated 40,000 female players in total.