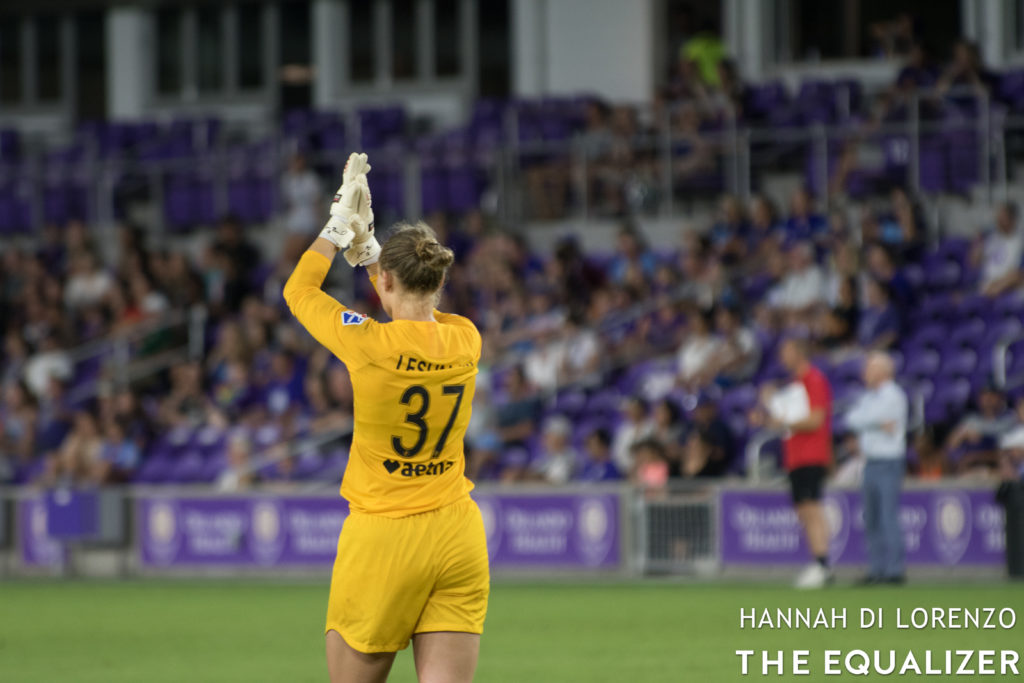 ORLANDO — Lynn Williams says that if she was a bystander watching the North Carolina Courage take on the Orlando Pride on Saturday night, she wouldn’t have realized Sam Leshnak is a rookie.

Williams said that the goalkeeper, who made her NWSL debut Saturday night, was calm, cool and collected. In goal, Leshnak made one save, but faced seven shots and chances from the Orlando Pride. Her one save came against Pride defender Carson Pickett. Williams said that she has a “lot” of confidence in her young goalkeeper.

Leshnak, according to Williams, is showing traits of leadership, too.

“At practice every single day, she’s encouraging everyone,” Williams said. “She’s really loud and she’s a big presence. I think that’s what you need in a goalkeeper. She’s one of the best shot-stoppers I’ve seen. She played with confidence [against Orlando] and she gave us confidence in her. I think she did really well. She came up with a couple big saves when we needed her.”

That type of goalkeeper quality is a testament to how Leshnak grew up in the game. However, Williams also extends that credit to the goalkeeping staff the Courage boasts, including Director of Goalkeeping Nathan Thackeray.

“A lot of the times, the keepers are off doing their own thing and we don’t get to see everything,” Williams explained. “Just her being with Katelyn [Rowland], Steph [Labbé] and Addie [Gay] — who didn’t travel with us — is an environment that’s really helped her.”

Making the decision to start Leshnak

Paul Riley is all about playing the hot-hand player. This season, the Courage have had three goalkeepers suit up in net. Right now, Stephanie Labbé is on duty with the Canadian national team, preparing for the World Cup. Meanwhile, Katelyn Rowland began the season injured.

However, Rowland is back from injury, but has struggled in recent matches.

Riley said the decision to start Leshnak was one not taken lightly. However, he made it clear to Leshnak that the only guarantee was the match against Orlando. Riley said that whoever is the best goalkeeper in two weeks, when the team comes back from the World Cup break, will be the starter. However, Riley wasn’t afraid to give Leshnak her credit after keeping a clean sheet against the Pride.

“You have to give her credit,” Riley said. “In her first game, she made a couple good saves and decision making throughout the game was pretty good. I’m happy with her.”

His decision to put Rowland on the sideline was “tough.”

“I believe in Kate so much,” Riley explained. “She’s a top, top goalkeeper. She’s a great decision maker and great with her feet. It was a really tough decision. When I told Kate, she mentioned that she’s suffering a little bit mentally. I told her to clear her head for the next week or two before we play again. I think we needed to make a change for the team, make a change for Kate.”

Riley was impressed and happy to see his veteran goalkeeper support the younger keeper. It was a trait that Williams also noticed in the team meetings and through practices.

“I know Kate obviously would’ve liked to be out there, but she was Sam’s biggest fan,” Williams said. “I think that gives Sam confidence in herself.”

“She was great on the bench and she was great in the meeting,” Riley said, adding to Williams’ sentiment. “I think that shows a lot of character of the group and resilience of the group.”

Think that about covers it.

Building a path to improvement

Rowland’s openness to admit struggling is something that Riley admires about the NWSL Championship winning goalkeeper. Riley called the veteran a “brilliant goalkeeper.”

“As you know, I pick her most of the time as my No. 1,” Riley explained. “She’s been fantastic. Since Labbé arrived, Kate has been injured. We haven’t had two healthy goalkeepers pushing each other yet. But, I believe in Kate. She’ll be back and I’m not worried about her at all.”

However, Riley isn’t just leaving it up to Rowland to pick up the pieces and get back into form. He’s open to listening to Rowland and helping to correct the problem.

“I just want to get her to 100 percent,” Riley said. “It’s my job to improve every player and I want to make her better.”

Even if Rowland is on the bench, she has a big role with the North Carolina Courage. The World Cup break will be a good time for Rowland to forget about past games and get healthy and ready to go. She will have that fair opportunity to engage in a competitive, but healthy, goalkeeper competition for the starting spot when the Courage face off with the Portland Thorns at home on June 15.