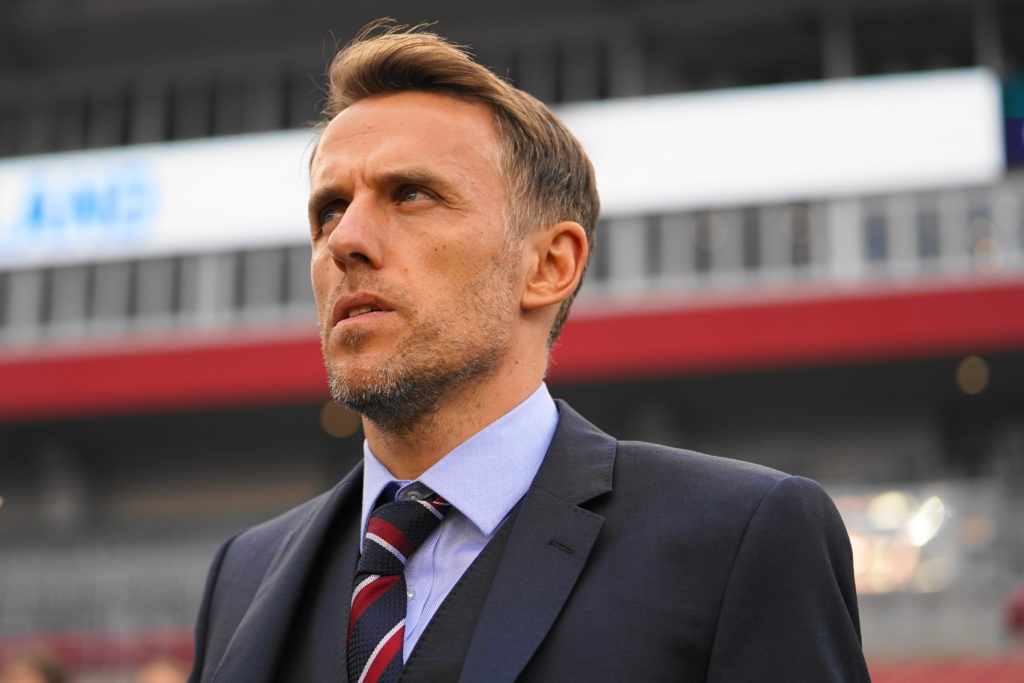 Much has been made of England’s supposed transition from direct, counter-attacking, pragmatists to sweet-passing, possession-hogging sophisticates under Phil Neville, but the reality is that, stylistically, they remain a hybrid team. This ability to mix things up and tailor their approach to different opponents is arguably one of their biggest strengths and could serve them well in France. After all, four years ago in Canada, Mark Sampson’s England won the bronze medal after Neville’s predecessor changed personnel, formation, and tactics in every game. Sometimes the Lionesses were very attacking, sometimes extremely cagey.

Sampson was compensating for the presence of only one player in the world’s top 40—Karen Carney—on his squad but, even though that number has now quadrupled, and Neville’s side are stronger technically, England still cannot quite dominate all comers courtesy of a single hallmark style. Granted, they won the SheBelieves Cup in the United States this spring, but home friendly defeats against Sweden and Canada raised concerns.

If the Lionesses are to reach the latter stages, their manager will surely need to rotate and tinker, but the good news is that his squad possesses the necessary depth and variety. Neville has tended to alternate between 4-3-3 and 4-2-3-1, but the latter formation brings out the best in Fran Kirby, the gifted Chelsea playmaker, facilitating her deployment in a classic number 10 role. Kirby’s ability to play between the lines appears integral to England’s chances, while Jade Moore and Jill Scott represent a well-balanced central midfield pairing.

Even so, the catalytic creativity of the injured attacking midfielder Jordan Nobbs will be missed. Defensively, England are strong, with Steph Houghton and Millie Bright forming a formidable central partnership, and Lucy Bronze, probably the world’s best right back, offering a dynamic attacking outlet. Neville has experimented with Bronze in central midfield, but she seems most effective at fullback. He appears spoiled for attacking choice, with Kirby, Nikita Parris, Toni Duggan, Beth Mead, Ellen White, and Jodie Taylor all capable of scoring key goals.

Neville’s dilemma is which combination to pick and how best to calibrate a front three or four, which cries out for the injured Nobbs’s reassuring amalgam of invention and defensive nous. With Nobbs on the pitch, the danger of England being overrun in central midfield diminished. Perhaps most importantly, Neville also needs to find a way of bringing the best out of Taylor, the leading scorer at the 2017 European Championship and, arguably, still his most dangerous striker.

In an ideal world, Phil Neville would recreate the glorious tactical anarchy of the swashbuckling Manchester United side he played in under Sir Alex Ferguson but, realistically, will probably need to locate his inner Rafa Benítez if England are to triumph. The twin brother of England netball coach Tracey Neville, he loathes scruffiness and has raised intelligence levels while lowering the squad’s average age. As an England player, Neville missed the final cut for three World Cups; this is his moment to compensate.

Born in Berwick, right on the border with Scotland, Olympique Lyon’s Bronze spent part of her childhood growing up on tiny Holy Island, or Lindisfarne, off the north Northumberland coast before later moving to Alnwick. Widely regarded as the world’s best right back, she played for boys’ teams until the age of 12, when the FA banned her. After starting her career with Sunderland, she won a sports scholarship to the University of North Carolina, but underwent four knee operations before the age of 23. The former Manchester City star is half Portuguese—through her father—and, a decent linguist, now speaks fluent French.

The women’s game was born in England during the 1890s, in Preston, where the trailblazing Dick, Kerr Ladies FC was founded in 1894, emerging as its early powerbase. Dick, Kerr Ladies’ Boxing Day game against St Helen’s Ladies in 1920 saw 53,000 fans congregate inside Goodison Park, with thousands locked outside. Earlier that year, they had beaten a French team 2-0 in front of 25,000, in the first women’s international game. A deeply disturbed FA duly took fright and, in 1921, banned women’s football from all grounds used by its affiliated men’s clubs. The pompous and patronizing reasoning was that “football was quite unsuitable for females.”

That remained the official view until 1969, when English women, embracing the rebellious spirit of the decade, began kicking balls again and formed the independent WFA. In 1971, the FA finally lifted the ban forbidding them from playing on affiliated grounds, but it would be another 22 years until the ruling body finally brought the women’s game under its auspices.

Hope Powell became England’s first full time coach in 1998, and seven years later, England hosted the 2005 European Championship. The foundation of the FA Women’s Super League came in 2011, and the national team have reached the last four of the past two major tournaments, the World Cup in 2015 and the Euros two years later.

Beth Mead. She topped the WSL scoring charts during her Sunderland days and, despite being converted to a winger since joining Arsenal, she has scored five goals in 12 England appearances. Capable of playing anywhere across the front line, Mead’s emergence means that even Barcelona’s Toni Duggan is not guaranteed a starting place.

What is the realistic aim for England in France and why?

After reaching the semifinals of both Canada 2015 and Euro 2017, the ambition is to win the tournament. Anything less than a fourth-place finish will represent disappointment, but navigating a potentially hazard-strewn road to Lyon may prove tougher than imagined. The Lionesses do at least look virtually certain to progress from an initial group also featuring Argentina, almost certainly the tournament’s weakest team, as well as Japan and Scotland.

According to the most recent accounts, the FA’s annual spending on women’s football was £17.7 million ($22.4 million) out of an overall £125 million ($158 million) budget, the biggest investment in the women’s game of any European association.

There are 1,831 FA-affiliated women’s teams in England, and 4,073 affiliated girls teams. The total (affiliated and unaffiliated) number of women aged 16 and over playing in England is now 1.8 million, and the number of girls (ages 5–15) playing is 900,000. The latter two stats cover all frequencies and formats.

Louise Taylor writes for the Guardian.