Under the radar: Simone Charley and the NWSL’s little-known training players 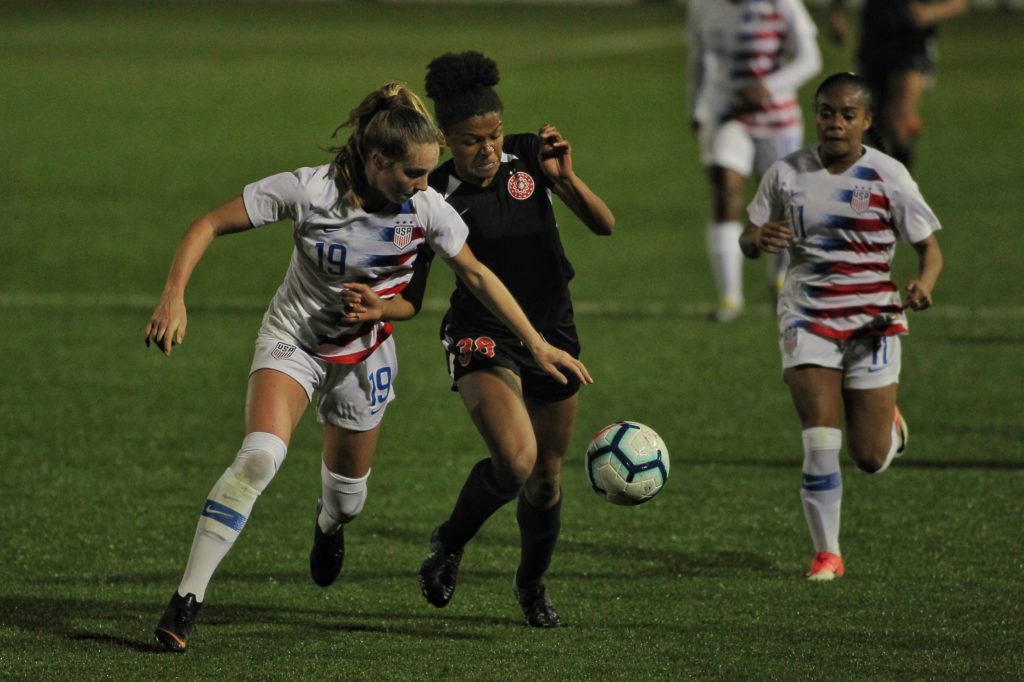 Last weekend, when the Thorns faced Sky Blue in the first weekend after all of the league’s World Cup players had left for camp, they fielded a lineup featuring a mix of youngsters, veteran Americans who aren’t in the national team pool, and internationals whose countries didn’t qualify for the tournament. That starting eleven included one player getting her first-ever professional minutes, Simone Charley.

It was a solid first start for Charley, who played as a striker in the same mold as Thorns players like Nadia Nadim and Ana Crnogorcevic—a fast, athletic player whose job is as much to cause chaos by pressing defenders relentlessly as it is to score goals. She notched three shots, one of which almost counts as an assist, as it hit Erika Skroski and fell to Midge Purce, who slotted it home.

To call Charley, who went undrafted out of Vanderbilt in 2018, a rookie, feels reductive, even if it’s technically true. Unfamiliar as her name was to fans before last weekend, she’s been training with the Thorns—as an amateur—for over a year. She finally earned a professional contract earlier this month, a full season of hard work and uncertainty about the future finally paying off. She’s one of a handful of Thorns who have earned contracts via a similar path over the years, and was, until she went pro, one of a bigger handful of unpaid training players who keep teams running under the league’s tight financial restrictions.

When the NWSL first kicked off in 2013, it came with a set of roster rules designed to keep the league within modest financial limits, after two previous leagues had failed by aiming too big, too early. The most-discussed items on that list were the salary rules, which initially set the minimum salary at just $6,000.

Somewhat less obviously problematic was the roster size itself, limited to just 20 players up until the beginning of the current season. It’s an issue that, for fans, usually came up on gameday when injuries occasionally meant a team couldn’t field a full 18. Do some basic math, though, and it’s obvious that you can’t really run a soccer team with only 20 players, for one simple reason: even with all 20 players healthy, you can’t practice actual, 11-v-11 game situations.

Teams have various ways of dealing with this, including having coaches or other staff members participate in full-sided drills. One little-understood fact about the NWSL, though, is that although amateur players no longer appear on rosters (as they did in 2015 and 2016 during the World Cup and Olympics), teams tend to have a handful of them in their orbit at any given time, whether in an informal arrangement like the one the Thorns use, or on a lower-league reserve team like the Red Stars or the Spirit.

For the players, though, who take on what should be a full-time job on top of the actual jobs they have to do to survive (Charley worked at the front desk at a gym and did one-on-one coaching in soccer and track on the side), with no guarantee they’ll ever earn a professional contract, the motivation is less obvious.

“It is very scary,” says Charley. “Just coming here, I was very nervous the whole time, even all last year, just because everything was unclear. Obviously, you come and give your best every day, but you don’t know what the end is going to be.”

Clubs can help these players find host families, but can’t provide any actual compensation. The payoff is the chance to train in a professional environment with some of the world’s best, and a shot—maybe—at a contract.

“When I’m having those conversations with players,” says Parsons, “[I say], I can’t pay you… I can’t guarantee you minutes. I can guarantee you [that] you will learn and develop in our environment.”

For players who enter the college draft and don’t end up getting selected, that can feel worthwhile, especially if the only other way to keep playing is going abroad. “I figured I might as well try this out, since it is in the U.S.,” says Celeste Boureille, who started training with the Thorns in preseason in 2016 after going undrafted. “I was actually also finishing an online class, so it’s kind of easier to do that in the states rather than go abroad.”

For Boureille, things moved quickly. She earned a contract right after preseason that first year. For others, though, the process is longer. Kelli Hubly came to the team in preseason in 2017, got game minutes when the Thorns lost several players to the European championship, and finally signed a contract early in 2018.

“Simone last year was, come and commit for the whole season of training,” says Parsons. “Train all year. Not, ‘am I going to get contracted in a month, or six,’ this is about 2019.”

Even training around some of the best players in the world, with high-quality coaching and facilities, it’s ultimately up to the players themselves to show up and work every day. “It was challenging,” says Charley. “Just to come in and put work in every day, give it everything you have, and nothing’s guaranteed. That’s the hardest part, giving 100 percent every day when you don’t know if you’ll get signed.”

Players in that situation have to be highly self-motivated. “Obviously, through the middle of the season,” Charley remembers, “the focus is the team, and games and championships… So the conversations weren’t, like, centered on me and what I’m doing. It was more learning to focus on my individual development.”

By all accounts, Charley spent the year focusing incredibly hard on growing as a player. “She’d spend, last year, an hour and a half to two hours after every training session kicking a ball against the wall in the stadium,” Parsons remembers. “When you’re doing that, and she’s improving her technique, [there’s a] psychological impact on a player. She is literally putting in more than anyone else. That’s going to help you at some point.”

That work has paid off for Charley, who says being around the professional game has forced her to understand the game better. “At this level, you have to study soccer more,” she says. “You can’t just rely on being fast… It’s about what you know, and your soccer IQ, making runs and being smart enough to know when to break and when not to break and stuff like that.”

With all the new players that enter the league through the college draft each year, it’s easy to forget how many quality players go undrafted. More than 200 players registered for the draft in 2019, most of whom didn’t get selected. Charley is one of a handful of those players not selected who, through a combination of hard work and luck, made it to the professional level anyway. If the World Cup is a challenge for the league as a whole, it’s a boon to those players, who are getting a chance on the big stage in the absence of the NWSL’s stars.

From a purely practical standpoint, the decision to train for a professional team without compensation doesn’t make a lot of sense. Charley studied psychology and sociology at Vanderbilt, and has a master’s degree in medicine, health, and society. She’s putting a career as a clinical psychologist on hold for a game she loves. “I want to play soccer,” she says, “as long as possible.”