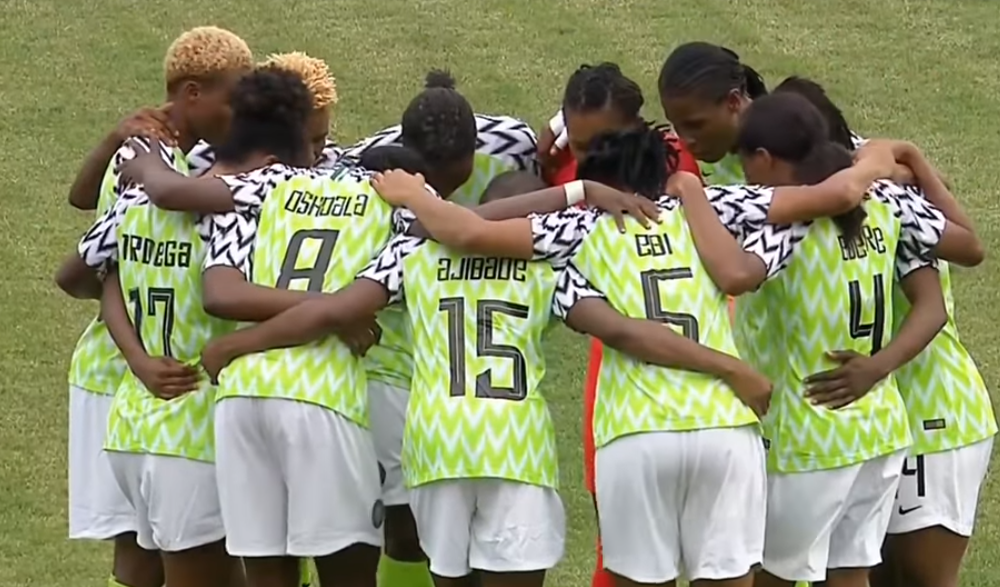 For many, many years the Super Falcons have been a team of disparate parts cobbled together in the shortest time frame possible and expected to perform optimally with very little preparation. To their credit, they have almost always delivered, especially on the continent where they have won nine of 11 Africa Women’s Cup of Nations.

The 2018 tournament, however, was the clearest indication yet that Nigeria’s dominance on the continent was under threat. Though the Super Falcons eventually won the tournament, they were tested and well-matched by Cameroon and South Africa in the semifinal and the final. Nigeria were taken to penalties before winning both games.

The continued excellence of the women has contributed towards papering over the cracks that are there. They are seriously underfunded with the men’s side – as is the case in so many other countries – a priority. Star players Asisat Oshoala and Desire Oparanozie had to express their frustration on social media with the team’s lack of games after winning the AWCON in December 2016. The Super Falcons did not have a game until April 2018, months before the next tournament.

Heading into the Women’s World Cup, the Nigeria Football Federation has got its act together and ensured that the team have had a much better preparation. Bringing in Thomas Dennerby, who coached Sweden to Bronze at the 2011 World Cup, was a clear indication. And then Nigeria featured in the Meizhou Four Nation Tournament, the Cyprus Cup, and had a training camp in Spain, where they played a friendly against Canada before their final preparations in Austria.

The NFF now hopes that the Super Falcons can transfer their continental success to the world stage and at least get out of the group stage for the first time since 1999.

They have been handed a tough draw, however, as they ended up in Group A with hosts France, South Korea and Norway. Dennerby believes having “three or four points” before the final group game against France (Nigeria lost 8-0 to France in a friendly last year) will be crucial.

Dennerby has tried to instill some order in the attack and tried to make the players work more together while still trying to maintain the verve and the pace of the forward line.

Playing with a 4-5-1 that easily morphs into a 4-4-2 when Rasheedat Ajibade starts, the pace and agility of Barcelona forward Oshoala, strength and poise of Oparanozie, and the pizzazz and creativity of Francisca Ordega are pivotal to the team’s forward play.

The Super Falcons play a fluid attacking system based on quick transitions into the pacy attackers. Despite the inexhaustible Rita Chikwelu plugging several holes in midfield alongside Halimatu Ayinde, there are spaces there for opponents to exploit with the ageless Onome Ebi and the defense needing to keep a high defensive line.

The defense looked strong at the AWCON, conceding just one goal throughout the tournament, but the friendlies for the World Cup revealed a weakness in set-piece situations.

In search of more than just continental success, Nigeria turned to Thomas Dennerby in January 2018 after the NFF failed to land the American coach Randy Waldrum. He has had to work quite hard to be accepted because of the fact that he replaced the Super Falcons legend Florence Omagbemi, who had won an AWCON title and made the FIFA Coach of the Year shortlist.

But the former Sweden coach had an impressive CV that probably justified the NFF’s actions. Dennerby has had success with the team, winning the AWCON title and bronze at the maiden WAFU Cup but he now has his work cut out with the aim to excel on the global stage.

After winning the FIFA Under-20 Golden Ball and Golden Boot in 2014, Asisat Oshoala has not looked back. She has added three African Women’s Footballer of the Year awards, earned moves to Liverpool and Arsenal and now is on loan at Barcelona after an eyebrow raising move to China. Oshoala scored seven goals in seven league games for Barcelona and contributed to the Spanish side’s journey to the final of the Women Champions League.

Rasheedat Ajibade, one of the brightest young stars in the team, is also an accomplished freestyler. She won the first edition of the Nigeria National Freestyle Championship and retained the title in September 2018. Apart from freestyling, Ajibade has also had success as a rollerblader, winning the Lagos state skating championship.

Women’s football in Nigeria started in the late 1960s when it was played passively in schools and on the streets in the villages and big cities as the girls joined the boys to play the game.

The formation of the Nigeria Female Football Organising Association in 1978 was another big stepping stone for women’s football in Nigeria. Though it took another six years before the first national women’s football championship was organised by Princess Bola Jegede and held at the National Stadium in Lagos.

The women’s national team began playing games in 1991 with the African Championship. Nigeria won the title beating Ghana in the finals and qualified for the inaugural Women’s World Cup in China.

The Falcons would win seven straight continental championships before finishing third in 2008. After 2008, the fourth place finish in 2012, served as a valley in Nigeria’s dominance on the continent. The continental success has so far not transferred to the World Cup with the Nigeria women’s senior national team going past the group stage only once.

Onome Ebi. The 36-year-old, playing in her fifth World Cup, has aged like fine wine with her impressive strength and steely determination. She may have lost a yard of pace but she makes up for it with her supreme game reading ability and anticipation. The Henan Huishang defender always knows when to step up from the defense to shut down attackers and when not to.

What is the realistic aim for Nigeria in France and why?

For a team that has not gone past the group stage since 1999, getting into the last 16 would be a cause for celebration. The Super Falcons are placed in a tough group and they could well fail to go through but if they produce gutsy and impressive performances would still not count as too great a disappointment.