Heath, Pugh, Press power US to 3-0 victory over Mexico 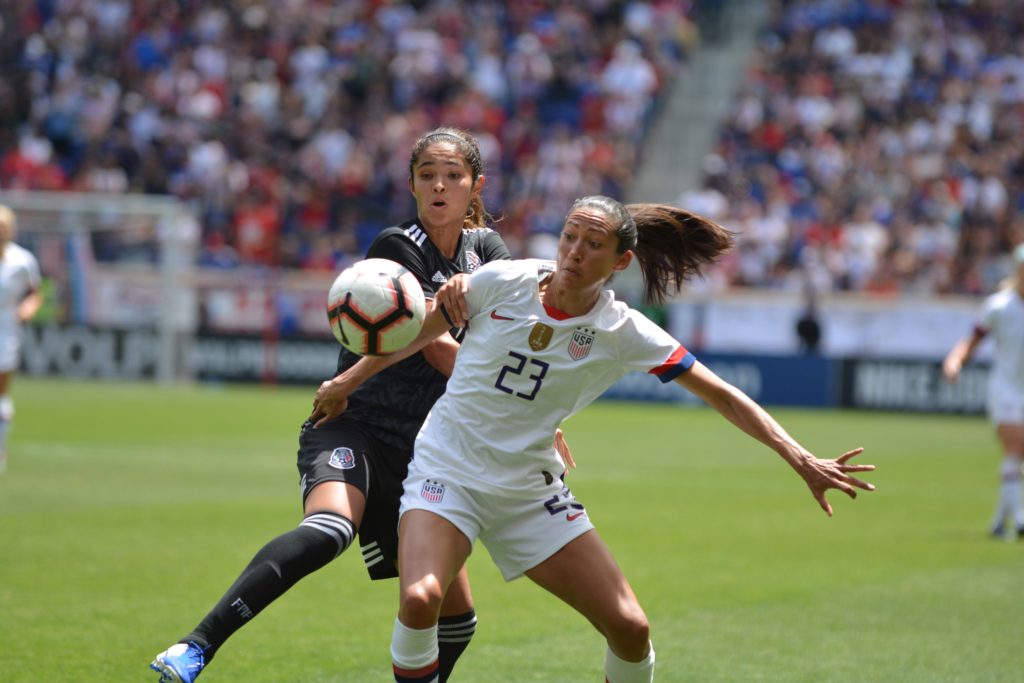 The US finished off their send-off series with a 3-0 win over Mexico, cruising to an easy victory and (just as importantly) ensuring everyone will get on the plane to France without any major injuries.

The US started off lively. Tobin Heath sent a few balls wide, and Alex Morgan was denied by the offside flag, but it seemed like a matter of time as Mexico struggled to break out of their defensive half.

The breakthrough came in the 11th minute. A miscommunication between goalkeeper Cecilia Santiago and defender Rebeca Bernal gave the ball away to Tobin Heath inside the box, and she easily put it away.

As sometimes happens, Mexico settled in and played better after the opening goal, although whenever they worked the ball up the pitch, their attack was stopped before it got to the final pass. Morgan had a great opportunity to double the lead when a well-played counter had her 1v1 with Santiago, but she couldn’t put it away. The keeper came up big twice late in the first half to deny Crystal Dunn, who moved into midfield with a formation shift.

The game slowed down in the second half, a result of a combination of the heat, a slew of substitutions and positional shifts, and a desire by the players to exit the game injury-free. Both Carli Lloyd and Tobin Heath thought Lloyd had doubled the lead early on, celebrating in their home state, but the goal was called back for offside.

Lloyd kept pushing, and she at least got her name in the box score. In the 76th minute she drove endline, aiming for the near post, but Santiago had it covered, so she cut it back for Mallory Pugh to run onto.

Christen Press put the game away shortly before full-time, receiving the ball on top of the penalty box and turning to create space, launching a low ball into the back of the net.

Mexico had one good opportunity in the second half when Kiana Palacios found some space in the US box with a loose ball, but she wasn’t able to connect for the shot.

The Womens’ World Cup beckons next, kicking off on June 7. The US will open against Thailand on the 11th, take on Chile on the 16th, and face off with Sweden on the 20th to round out the group stage.

Megan Rapinoe calls for intellectual investment in women’s sports
After a celebratory sendoff, now it’s time for the USWNT to play soccer