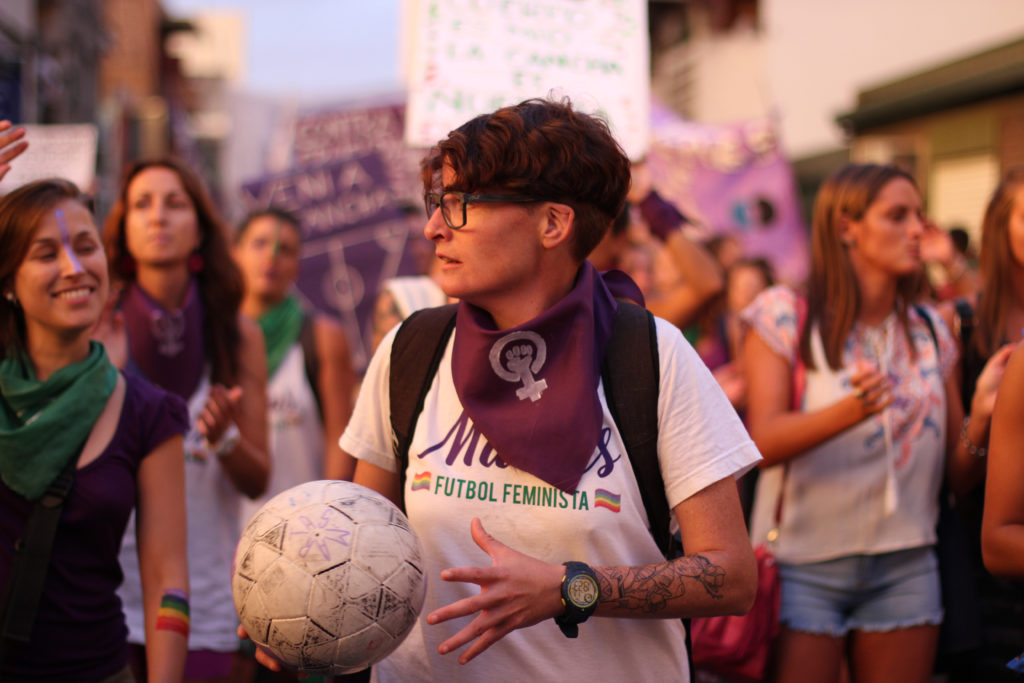 When Argentina’s women’s national team takes the field against Japan on June 10, it will be their first appearance in a World Cup since 2007. Fans would happily forget the disastrous performance that year in China, which began with a record-breaking loss 11-0 to Germany. Germany went on to win the title without conceding a goal, while Argentina exited at the group stage after three straight losses.

In the years following the 2007 World Cup, the Argentine Football Association (AFA) revived the national women’s team every so often to play in the Copa America Feminina, the continental tournament held every four years that qualifies South American teams for the Pan-American Games, the Olympics, and the World Cup. Beyond brief moments of support, the AFA showed no interest in having a women’s program. In 2015, the Argentines had been relegated to “inactive” by FIFA, meaning the federation had not responded to invitations to play or convened the team. In 2016, one might say the team hit rock bottom, without a coach and having played no official FIFA matches, the team was ranked No. 128.

Historically, the gap between the men’s and women’s team rankings has been among the widest in global soccer. Despite the abject neglect of the women’s side, there have been indications of the untapped talent in Argentina. In the South American club competition, Copa Libertadores Femenina, UAI Urquiza and River Plate managed to take third place in 2015 and 2017, respectively. Breakout stars like Estefanía Banini and Sole Jaimes hint at the quality of players that exist, if largely undeveloped.

After the period of inactivity, when the team was finally convened to play a match in Uruguay in August 2017, the players could hardly believe the schedule, requiring they travel in and out of the country on match day. In response, the national women’s team went on strike. The players’ chief complaints included their meager stipends, lack of playing opportunities, and not staffing the team with a coach or trainers.

At the time, players were supposed to receive approximately $8.50 USD for each training. Although the $8.50 hardly covered tolls or bus fare to the training grounds, every bit helped. The AFA responded slowly, but they did respond, by re-hiring former coach Carlos Borrello, who had led the women’s club team, UAI Urquiza. Slowly, journalists began publicizing the letter announcing the strike and writing articles on the state of affairs. Still, going into the 2018 Copa America Femenina, the squad only had a few weeks of real training.

It is worth mentioning that the AFA’s directors habitually participated in fraud during this period. This meant that any development money earmarked for women was likely misappropriated. Moreover, the fraudulent behavior of directors hurt the stability, communication, and solvency of Argentine soccer, especially women, who were already a low priority for them.

When I visited the AFA training grounds just before the 2018 Copa America, the players expressed frustration during their scrimmage against a boys’ team. Some complained that the boys just wanted to hurt them, rather than play them. The lack of support for a culture of women’s soccer makes it difficult to find appropriate teams to play against. The rest of the South American federations, barring Brazil, rarely sought to schedule friendlies, which has hurt the level of play in the CONMBEOL countries.

When I asked coach Borrello about the state of the team, he assured me that all of the problems of the 2017 strike had been resolved. He also mentioned that the squad awaited several of their key players who were in foreign leagues, including Banini (who was playing in the NWSL with the Washington Spirit) and Jaimes (then playing in the Chinese league, now at Olympique de Lyon), among others.

Still, the players seemed optimistic. Going into the Copa, I traveled to and from the training ground with midfielder Ruth “Chule” Bravo, picking up players without transportation. Bravo seemed absolutely confident that the squad would perform better than expected in the tournament.

“France, we could really go to France,” she whispered.

Bravo had just secured a Nike sponsorship and was playing for Boca Juniors’ “professional” team, but also had an outstanding offer from a Spanish club (her current club, CD Tacon). As she suspected, Argentina squeaked out a third-place finish to gain a playoff opportunity to qualify for the World Cup. They defeated Panama last November to earn the berth.

The qualification of the national team for the 2019 World Cup helped spur the explosion of activity around women’s soccer over the past year. Grassroots organizations that have been working for decades to change the culture of soccer and develop girls’ leagues finally seem to be getting the attention they deserve.

The players and coaches of the feminist collective, La Nuestra, who work to develop soccer for girls in marginalized, working-class neighborhoods of Buenos Aires, have been on the forefront of organizing young players and fighting for public spaces where they can play. Their fan group held a visible banner that read “Futbol Feminista” during Argentina’s win over Panama. Founder, technical director, and former player, Monica Santino explained to me that while watching the women’s national team over the past year: “The girls began to see the players as idols and role models. They are interested to know about their lives. They ask for pictures with them.”

At the end of January, player Macarena Sánchez brought the conditions of women’s professional soccer in Argentina to international attention. At once becoming a feminist cause celebre and a target of violent sexism, Sánchez filed a lawsuit against her club, UAI Urquiza, and the federation after directors abruptly fired her. This left her unemployed for the remainder of the season and during the six months mandatory transfer waiting period.

Support poured in from various corners of the dynamic feminist movement connected with #NiUnaMenos, journalists, and institutions (including world players’ union FIFPRO). A number of gender commissions within clubs, which have formed throughout the country, voiced their support for Sánchez’s case. Last month, the Argentine Football Association announced it would help the league to contract women players’ professionally. The Federation agreed to pay each club roughly $2,700 per month to subsidize eight women’s contracts. If the eight players mandated earned the same, they would make about $337 each per month.

EXTRA: In Italy, a renaissance for clubs and country

I asked goalkeeper Gaby Garton, who has played for UAI Urquiza and is on the national team, about how this decision was received by players.

“We are all excited, but also cautious because there are only eight contracts per team,” she said. “The amount AFA is paying is minimal but considering the fact that the players are currently making zero, it’s an obvious improvement. I think it’s a good starting point.”

The grassroots supporters also viewed the announcement with a degree of ambivalence. After years of viewing women’s football as a space without the rampant consumerism and objectification of working-class bodies, organizers like Santino worry that the women’s professional game will simply mimic the worst qualities of the men’s game.

“The concern is that women players are mingling in the model of men’s soccer, which hunts for talent and leaves the values of sport behind,” Santino said. “We worry about the lessons we have learned together and the empowerment we’ve created will be subordinate to winning at all cost and in that process they will stop valuing players as people.”

It’s hard to keep expectations in check with the World Cup so close. The enthusiasm from players is infectious as many share the moments when they receive their jerseys and Panini stickers, and see the touching promotional videos for the first time.

Despite drawing a tough group, with an opening match against traditional powerhouse, Japan, followed by Scotland and England, the Argentine women are undaunted.

“As an athlete, being able to compete against the best players in the world is something that a lot of us have always dreamed of,” Garton says.

Argentina got a taste of playing top competition at the inaugural Cup of Nations tournament this in Australia earlier this year. If the Cup was any indication, it will be a difficult path for Argentina to clear the group stages in France. The team lost all three matches and was unable to score against Australia, South Korea and New Zealand. They fared better in the four friendlies they played against university teams in the U.S. in April. Borrello has stated he will try to focus on tightening their defensive strategy and honing in on players’ individual strengths to close the gaps with other teams.

During the World Cup, we can expect to see a superficial support from the traditional soccer establishments. Current AFA president Claudio Tapia indicated he will prioritize women’s soccer in light of this year’s development. However, that will be complicated given that the confederation, CONMEBOL, scheduled the men’s Copa America tournament during the Women’s World Cup, including holding the final on the exact same day, July 7 (which is also the same date as Concacaf’s Gold Cup final).

Despite petitions and requests to change the men’s tournament, CONMEBOL refused, creating competition for media attention, broadcasting, and fan support. There remains ongoing institutional disrespect for women’s soccer, but if the last two years are any indication, Argentine women’s players are prepared to challenge sexism anywhere and everywhere. Moreover, whether or not the traditional fans follow this team, they’ve already won over a whole new generation at home.

The unsurprisingly surprising NWSL is in full swing
The Lowdown: The best NWSL players of 2019 — so far