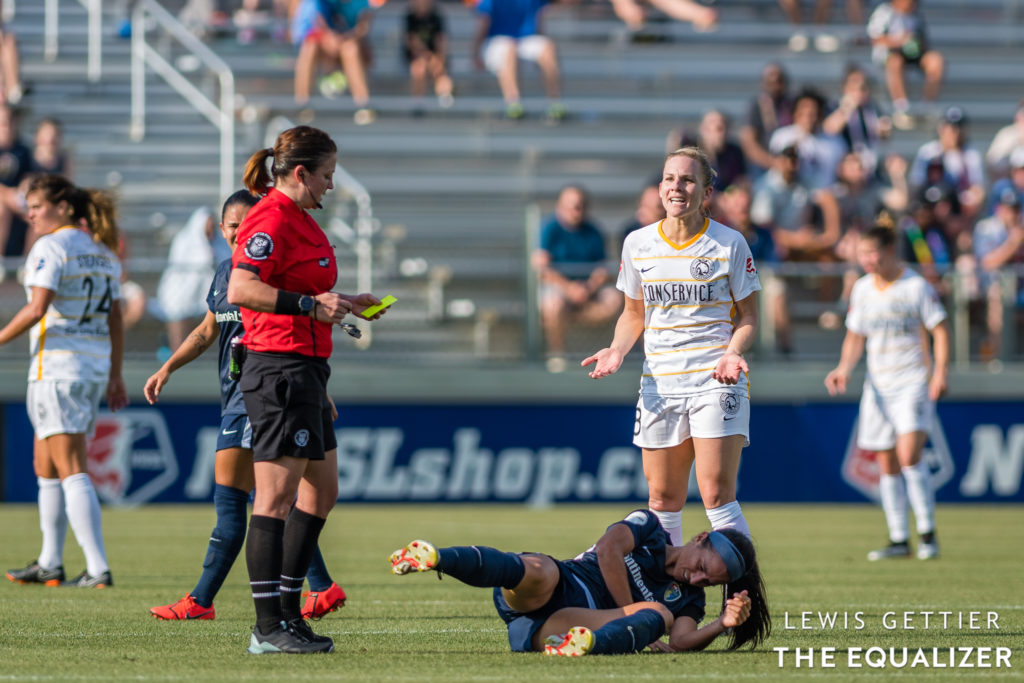 A match between the NC Courage and Utah Royals FC in Week 6 of the 2019 NWSL regular season at Sahlen's Stadium at WakeMed Soccer Park in Cary, NC - Sunday, May 19, 2019. Photo by Lewis Gettier

Elizabeth Eddy came off the bench and scored the equalizer in her first action of the season to rally the North Carolina Courage to a 1-1 draw against Utah Royals FC. Amy Rodriguez had given the visitors a first-half lead, but the Royals’ fifth straight game scoring exactly one goal left them winless in two after winning three straight to start the season.

The Royals goal was a thing of beauty. A Courage outlet pass went to Katie Bowen who put a single touch on it and knocked it ahead to Gunnhildur Jonsdottir. Gunny windmilled to tap it around Cari Roccaro and ahead to Katie Stengel who was running behind McCall Zerboni and between the center backs. Stengel got there in time to play a third one-touch ball left to Rodriguez whose soft shot was perfectly placed inside the left post. Courage keeper Katelyn Rowland appeared to misjudge the ball believing it was going to be wide.

The Courage controlled much of the second half and nearly equalized on a Lynn Williams breakaway, but Nicole Barnhart came out and made the save on the 2016 Golden Boot winner. Instead Eddy became an unlikely hero. A ball in from Jaelene Hinkle was missed by the Royals defense. Debinha took a slick touch at the loose ball and found Eddy on the right side. Eddy shot it far post to pull the league champs equal.

The Royals (3-1-1, 10 pts) are home next Saturday to host Orlando Pride. The Courage (2-1-3, 9 pts) return to action with a Memorial Day match in Tacoma against Reign FC.

The Chicago Red Stars will have to find another goal scorer that isn’t Sam Kerr.

No, Kerr isn’t being traded and she isn’t injured. However, she’s going to be missing a bit of time. Kerr is one of the 23 members of the Australian Women’s National Team’s World Cup squad. After this weekend’s action, Kerr will be heading off to train with her national team before the World Cup.

The Australian netted her ninth career NWSL brace on Sunday, with two goals over the Houston Dash. Kerr got the scoring off quickly, with goals in the 8th and 13th minutes. The goals were only six minutes away from each other, breaking through a crumbling Houston Dash defense.

However, Houston wasn’t down and out. Sofia Huerta scored a goal to give the Dash some hope in the 26th minute. However, no other members of the Dash were able to find the back of the net. Meanwhile, Dash leading goal-scorer Rachel Daly was on in the stands, as she was suspended for two matches. She’ll complete her suspension whenever she returns from international duty and World Cup play with England.

Houston’s other chances came on goal from Kealia Ohai and another attempt from Huerta.

Three points on the road gives Chicago a jump up to first place in the NWSL. Currently, they are leading the league with 11 points, just narrowly ahead of the second-place Utah Royals FC and the third-place Dash.

.@schuerta gets @HoustonDash on the board with a quick strike.