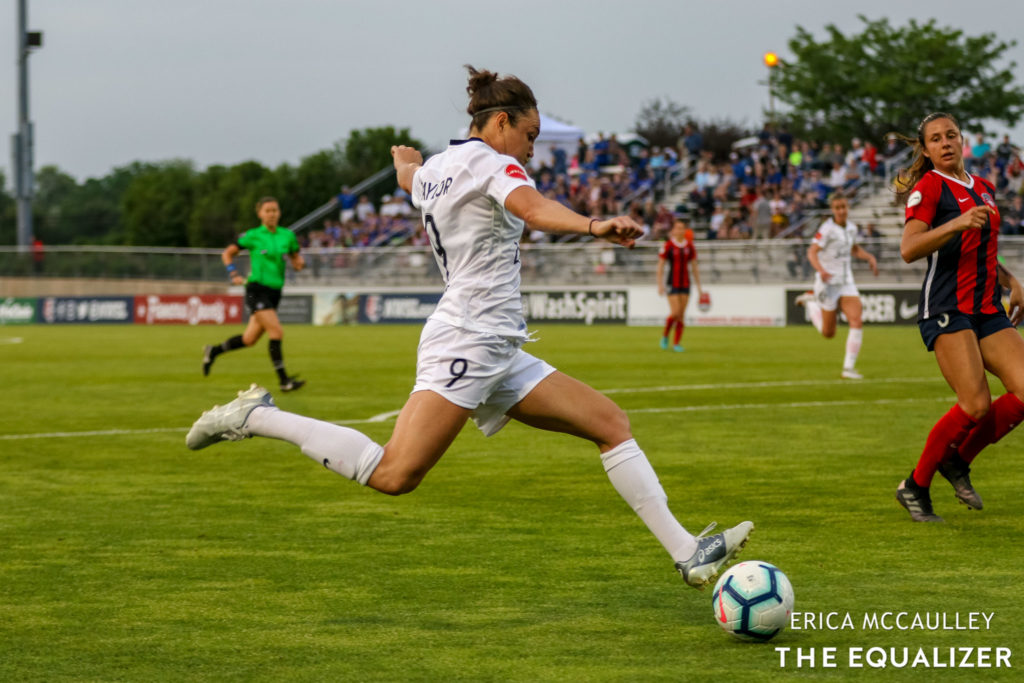 Reign FC forward Jodie Taylor (4) heads a shot on goal during a match at the Maryland SoccerPlex in Germantown, MD - Saturday, May 4, 2019. Photo by Erica McCaulley

It wasn’t a bird and it wasn’t a plane. You didn’t need to wipe your glasses or rub your eyes. What fans were seeing at Cheney Stadium was real life and truly a stunning event.

After Michelle Betos was helped off the pitch by two trainers, Reign FC were left scratching their heads. Head coach Vlatko Andonovski had already made his three substitutes. He didn’t have enough left to bring in Australian international Lydia Williams.

The dish. The cross. The goal. @raque_rocky gets @SkyBlueFC on the big board.

However, he did have another option: Morgan Andrews.

Andrews suited up in a bright pink pinnie and some green goalkeeper gloves. She faced a couple quick shots in stoppage time, which went on way past the allotted three minutes. Andrews was able to help keep the final score at 2-1 before the final whistle blew. As soon as the whistle sounded, her teammates enveloped her in a hug, including Williams.

That was just one piece of excitement for Reign FC this afternoon. Reign FC had a busy day attacking goal and Sky Blue FC goalkeeper DiDi Haracic. The Tacoma-based club took 20 total shots against Sky Blue, but only managed to register four on goal. On the other hand, Sky Blue FC attempted six shots with three on goal.

One of the three goals came from Raquel Rodriguez.

The Costa Rican international put up the first tally in the 10th minute. However, Sky Blue FC’s lead on the road didn’t last long. Three minutes after Rodriguez’ goal, disaster struct when Julie James scored an own goal on a corner kick. Initially, there was some confusion. At first, the goal was awarded to Reign FC forward Jaycie Johnson. Then, it was deemed an own goal by Sarah Killion, but then later corrected to James.

Reign FC took the lead in the second half, with Jodie Taylor finding the back of the net. Taylor recorded five of the Reign FC shots, registering two on goal.

Reign FC now have three points to their name, earning the first victory of the season. Meanwhile, Sky Blue FC is still searching for their fist victory of 2019.

Morgan Andrews, the @ReignFC goalkeeper? Don't wipe your glasses, because it's true! Michelle Betos has suffered an injury and Andrews replaces her in goal.#RFCvNJ | 2-1 pic.twitter.com/tsI6AokbHN

The Washington Spirit youth is quietly taking over the NWSL.

Hosting the Portland Thorns FC, the Spirit tapped in three goals for a victory over the two-consecutive NWSL Championship participants. The Spirit actually scored two goals, with the third coming off and own goal from Dagný Brynjarsdóttir in the 47th minute.

Good build up from @WashSpirit and it pays off with @ash_hatch33's strong finish.

The goal looked to originally be from Sam Staab.

Meanwhile, Ashley Hatch got the scoring going in the first half, in the 16th minute. Hatch was the leading goal-scorer for the Spirit last year, in her first season with the club. This season, Hatch has one goal to her name.

And then it was 2-0. @SamStaab_ doubles the lead for @WashSpirit.

The Thorns earned a goal from Australian international Caitlin Foord, before she heads off to camp with the Australian National Team. Ana-Maria Crnogorcevic was credited with the assist.

Portland will hit the road one more time before heading back home to the newly renovated Providence Park. The Thorns will hit the road to New Jersey to face Sky Blue FC on Saturday. Meanwhile, the Spirit will face the Chicago Red Stars on Sunday in Bridgeview.

We've got ourselves a game. @CaitlinFoord gets one back for @ThornsFC.