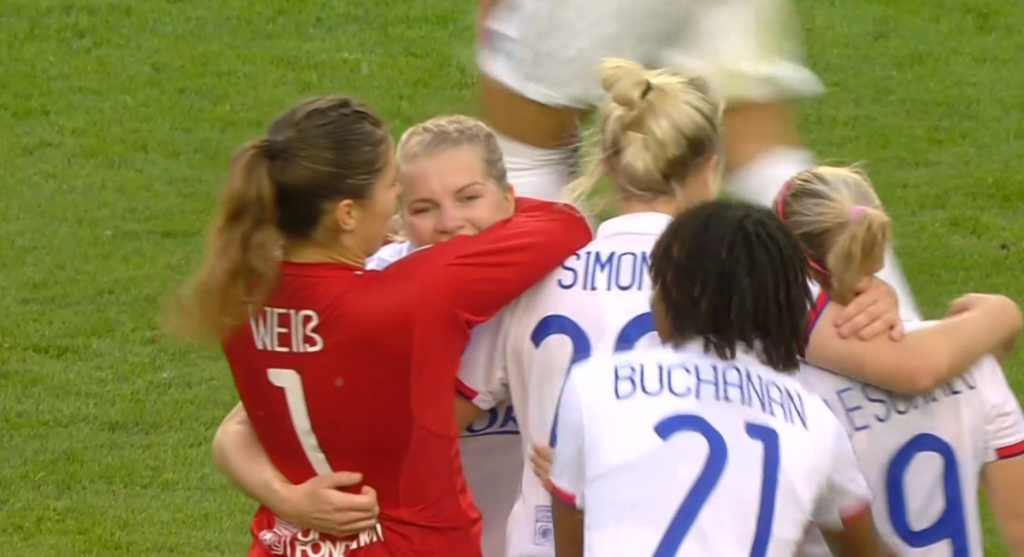 Ada Hegerberg scored a hat trick in the first 30 minutes of the match as Olympique Lyonnais cruised past FC Barcelona, 4-1 on Saturday to clinch their fourth consecutive UEFA Women’s Champions League title. The European crown is Lyon’s sixth overall.

Hegerberg, the reigning women’s Ballon d’Or winner, scored her first goal in the 14th minute, easily tapping in a cross from Shanice van de Sanden. Hegerberg would score again two minutes later before completing the hat trick in the 30th minute against an overwhelmed Barcelona side.

The moment @AdaStolsmo became the first player to score a hat-trick in a Women's Champions League final ? pic.twitter.com/qgUA50j52R

German international Dzsenifer Marozsán opened the scoring five minutes into the match at the Groupama Arena in her hometown of Budapest, Hungary. Like Hegerberg’s goal to double the lead, Marozsán’s was a product of van de Sanden breaking free on Lyon’s right flank and providing the low cross for the goal. Barcelona left back Leila Ouahabi was caught out on both occasions.

Asisat Oshoala scored Barcelona’s consolation goal in the 89th minute. While defending plagued Barcelona, they had several opportunities offensively and could have kept the score more respectable, if not gotten back into the match. Alexia Putellas had the best of those opportunities, in the 45th minute, when she found herself unmarked at the back post on a corner kick but put her header over the bar.

Barcelona were playing in their first Champions League final.

Rose Lavelle is the answer to Jill Ellis’ long search for creativity
It’s Lyon’s world, and we’re all just living in it