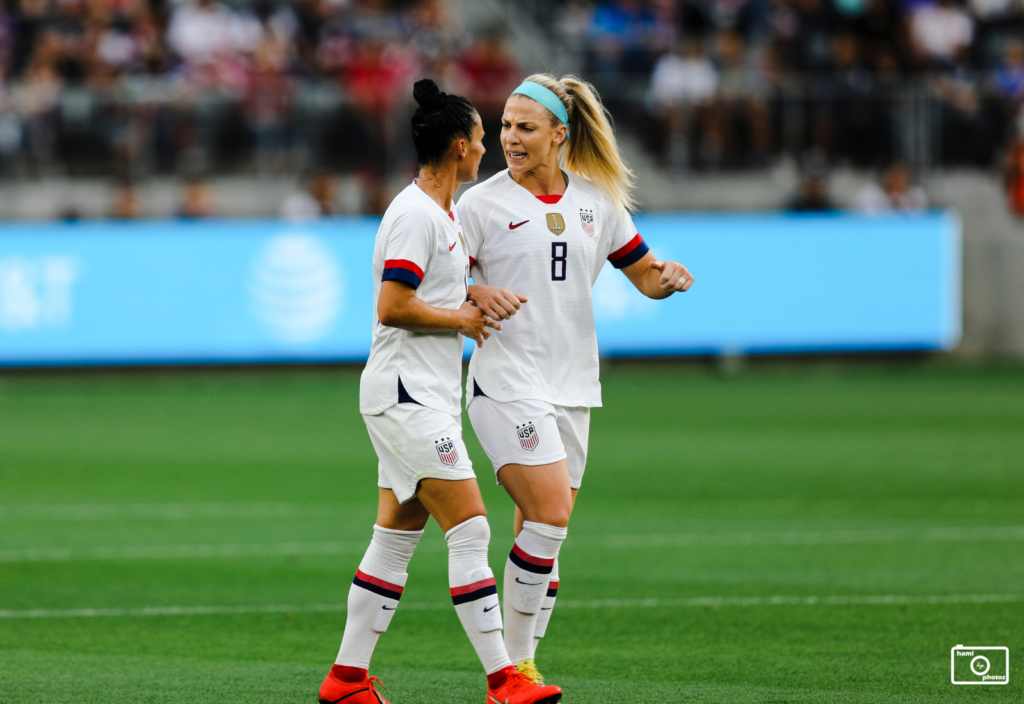 The United States women’s national team defeated New Zealand, 5-0 on Thursday in the second of three sendoff games prior to the 2019 World Cup. It was, again, a slow start for the U.S. as tempo lagged and they figured out how to break down what was initially an organized New Zealand side, led by Tom Sermanni.

Carli Lloyd and Sam Mewis continued their scoring streaks, while Ali Krieger (finally!) reached 100 caps. What else did we learn in St Louis?

Jill Ellis rolled out what we’ve come to expect as her preferred starting XI when everyone is healthy, and it included Lindsey Horan instead of Mewis in central midfield. Horan had a pretty good first half once she pushed higher, playing a link-up role and trying to break down New Zealand with late runs from deep positions. She even got on the stat sheet with an assist to Rose Lavelle for the second goal of the night. 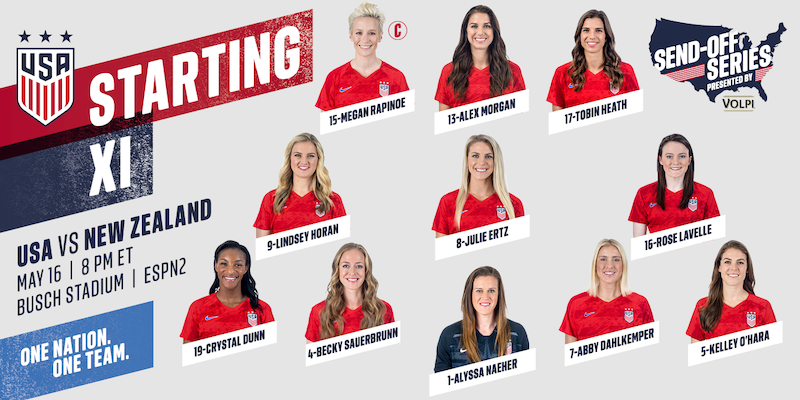 Mewis subbed in for Horan at halftime and picked up where she left off against South Africa, cutting out defenders with her passing and notching her third goal in two matches (helped by a deflection). She was also responsible for the key pass that led to Lloyd’s first goal.

Mewis is probably in better form at the moment, at least in part due to the fact that Horan has had some recent minor injuries. But Horan has more than proven she has what it takes to be starting. This has to be the biggest choice Ellis is going to have to make when it comes to World Cup knockout rounds. Given Lavelle’s record of injuries, it’s probably worth exploring Horan and Mewis together in front of Ertz to see if they can play well off each other.

Should we be concerned about how little Alex Morgan has seen the ball in the last two games? Well, yes. It’s not that she’s not putting in the work – she had a nice attempt saved by Erin Nayler in the first half, she’s making the correct runs, and she’s dropping deep to pick up the ball. And to some extent, that’s the life of a center forward, especially on a team that relies so heavily on its wingers. Morgan has more than enough experience to assure us that if she does get a chance, she’ll probably put it away.

However, given what a scoring tear Morgan went on last year, we have to ask questions about why it has slowed; why she’s limited to playing with her back to goal as merely someone to play a ball off of; why sometimes the team seems to be playing around her. Part of that is her role. Yes, she often withdraws when a cross comes in, pulling a defender with her and allowing another player to make a diagonal run inside, but still, it’s concerning. Even with Lloyd and Christen Press nipping at Morgan’s toes, it’s highly unlikely she’ll lose her starting role, but with one game to go before it matters, she needs to demonstrate her mojo again.

Early in the first half, viewers could hear the coaching staff calling for Crystal Dunn and Kelley O’Hara to get higher. Dunn, in particular, found success with one of her more dynamic performances as of late, while O’Hara, still working her way back to fitness, was a little more muted than we normally see from her. What resulted from that, besides the offensive boost, was plenty of space behind them. New Zealand caught them out a few times, but nothing came of it.

That is, as it always has been, by design. Ellis has continually demonstrated that she’s willing to risk the occasional counterattack in return for the attacking edge in numbers her fullbacks give her. She relies on the speed of her fullbacks and the cover from her center backs, along with her holding midfielder, to close down any space until numbers can drop back. It’s a risky game, but it’s her choice.

Speaking of fullbacks, kudos must be given to Krieger for earning her 100th cap two years after earning the 98th. Few players in her position would have kept their foot in the door just enough to kick it open the moment they got another chance. It speaks highly of her professionalism and attitude to make a comeback like this, even if in a reduced role, and it says even more of her that she hasn’t looked out of place.