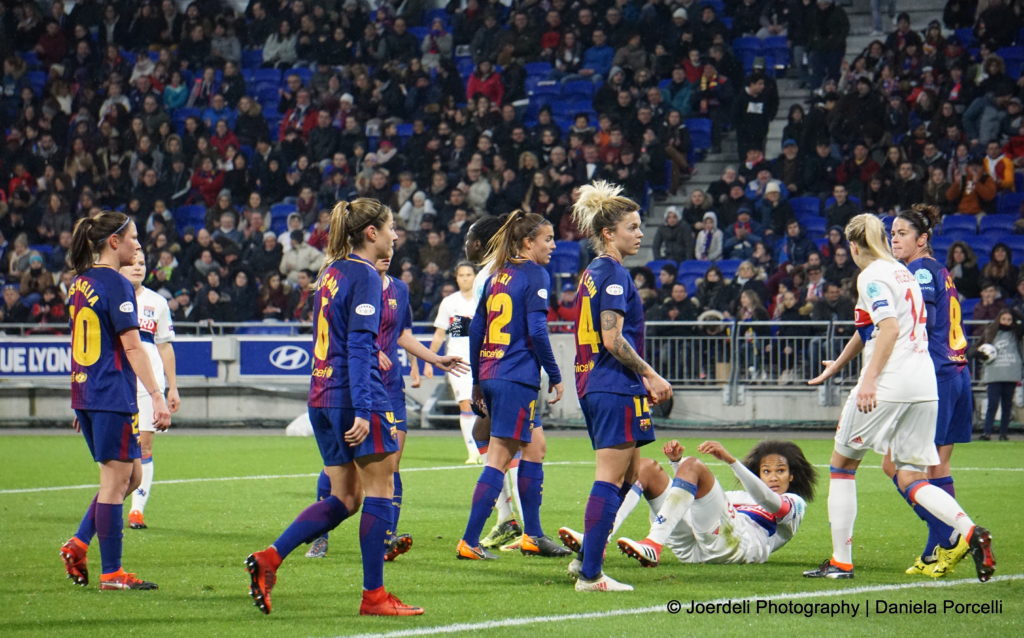 There is plenty of buzz around Barcelona right now, and why not? The team is in the Champions League final – becoming the first women’s team from Spain to reach the showpiece event – and there remains chatter that there will be a Catalan franchise in the National Women’s Soccer League, even if it looks unlikely (see here and here).

Playing in the Spanish Liga Iberdrola – a league that isn’t always easy to follow, even if you’re based in Spain – the former champions have been catapulted into everyone’s consciousness this year. But the progress of the team is far from an overnight story.

Around since 1988, CF Barcelona – sponsored by but not quite FC Barcelona – was a far from notable team. In 13 seasons, the side managed one cup final win and two second-place finishes in the old first division before being relegated into the second tier after a league reshuffle. Integrated into FC Barcelona, the team proved they were too good for the second level and, at the third time of asking, achieved promotion via the playoffs back to the top tier, where they lasted for three seasons before relegation.

The 2007-08 season is when they began their ascent, earning promotion at their first opportunity. The team steadily rose over their next three seasons back in the top-flight. Another league rebrand and reformatting followed and in the first year of the Superliga, FC Barcelona were crowned champions with 94 points after 34 matches. Three successive titles followed, as the league reduced from 18 teams to 16, resulting in four fewer matches. Yet the Catalans remained unable to crack the magic 80 points mark.

Runners-up to Barca for four seasons, Athletic Club scooped up the La Liga title on the penultimate day of the 2015-16 season as the then champions slipped to a narrow defeat to Atlético Madrid. The season was memorable not just for the slight shift, with a dominant generation of Basques finally claiming the title (by a lone point) but it was, significantly, the first season Barcelona operated as a professional club.

A dismal showing from Spain at their first World Cup in 2015 brought about a seismic shift in Spanish women’s football. Fallout from the tournament saw the players band together to oust Ignacio Quereda, the coach of the team for over 25 years. Spanish media finally stood up and took notice of the league. Whereas the news and information on the league was sparse and usually only put out irregularly by clubs, the mainstream media were happy to turn their attention to the women’s game and have been proudly featuring it ever since.

MORE: Pedro Malabia on the professionalization of women’s soccer in Spain 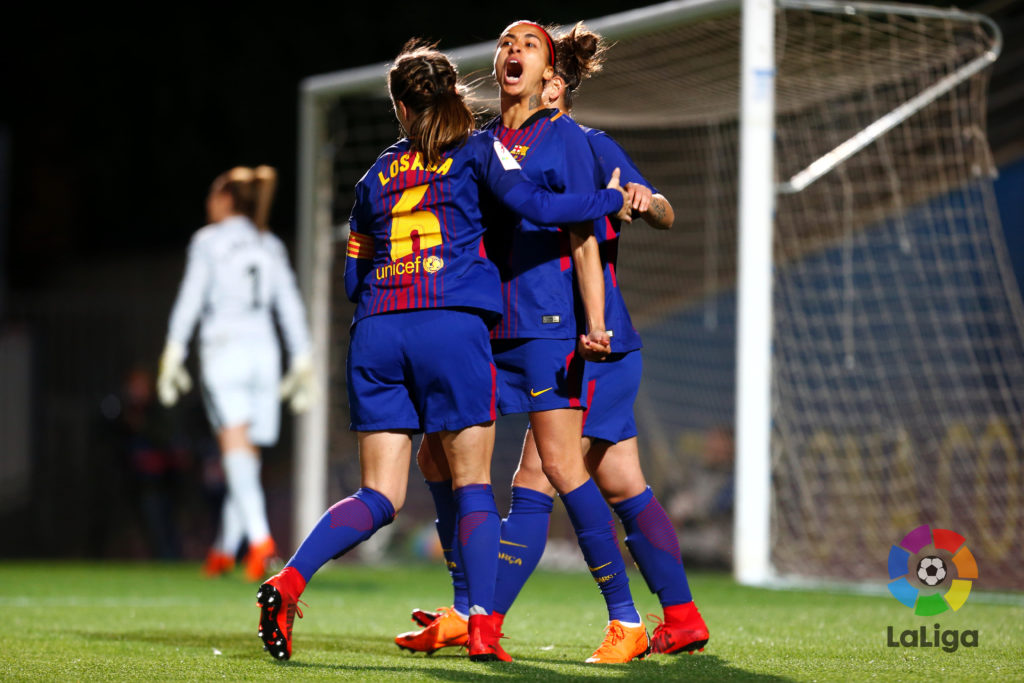 That 2015 season which marked Barcelona’s first as a professional setup was the start of a five-year strategy put into place by the board. The goal was clear: reach the 2019-2020 Champions League final. The steps weren’t too steep, with the onus on gradual growth and development, rather than throwing everything at it. The annual budget (now about €3.4 million, with the addition of sponsor Stanley) was a modest one for the scope of the project.

Throughout it all, the message from the club has remained the same; La Liga title is the important one each season, the UWCL is the goal for 2020. Yet, since their last title triumph in 2014-15, the Blaugranes have failed to reclaim the league crown since it was held by Athletic. From the Basque north, the title travelled south to the capital the following season, where it has stayed ever since, the rising Atleti team consistently one step ahead of their Catalan rivals.

Not quite the dominant force in the Champions League, despite their strength at home, the move to professionalism was one that would serve the purpose of the women’s team finding some strength in Europe, like Barca’s men’s team.

Barca’s first year in the women’s competition (2012-13) saw the Spanish champions soundly beaten 0-7, over two legs, by an Arsenal team who made it to the semifinals. Their second season saw a marked improvement, with the Catalans reaching the quarterfinals before being knocked out by Wolfsburg as the Germans refused to be stopped en route to the trophy.

But for Barca, it was one step forward and two back after falling to Bristol in the round of 16 in their 2014-15 campaign. Having conceded an own goal to the Vixens at the Mini Estadi, panic set in, and the team lost their heads in England.

The loss was the straw that broke the camel’s back. The strategy for European success put into place soon after. For Barca, it wasn’t just about the switch to full-time but rather, having the resources to bring in players to enhance and better the squad – something that brought its own share of troubles. With La Masia still producing talented young players for the youth and Barca B teams, there were fewer first-team spots that could be taken by the homegrown stars. A player like Ona Batlle was suddenly without a place to progress to in the first team with the arrival of Danish defender Line Røddik Hansen.

Røddik Hansen’s name might not be the first to come to mind when listing the best defenders in the world, but her arrival at Barcelona in 2016 was one that spoke to the ambitions of the club and the awareness of their shortcomings. She was a seasoned international with experience at Tyresö, Rosengård and Lyon.

It’s been with players like Røddik, Élise Bussaglia, Lieke Martens, Toni Duggan and Nataša Andonova that Barcelona has taken the next step, blending the team’s still typically Spanish and typically Catalan styles with a new dimension. These players brought their experience of playing in Europe with them. They brought the requisite skills to advance the team and, equally, the big-game experience. Brazilian Andressa Alves adding extra flair to the team. Each signing was well thought out and has uniquely brought rewards.

Following their eviction from the Champions League by Bristol City, Barcelona narrowly fell at the quarterfinal stage to Paris Saint-Germain the following season before going one better and getting knocked-out by PSG again in 2016-17, but at the semifinal stage. Barcelona’s fate was sealed again last season when they drew now three-time defending champions in the quarterfinals.

This year’s draw as a different story. The bottom half of the bracket, which featured Barcelona, was a quartet of teams which had never made the UEFA Champions League final. One of them was assured a debut, and it would be Barcelona, after comfortably beating Norway’s LSK Kvinner and more narrowly defeating Bayern Munich in the semi-finals.

However, it hasn’t all been smooth sailing for Barca. Manager Fran Sánchez had only taken over at the start of the 2017-18 season, but with performances subpar and negative results beginning to rack up, enough proved to be enough after a draw at home to Espanyol at the start of January, Sánchez was out with president Lluís Cortés taking over in time for Barcelona’s next outing six days later.

Performances began to pick up under Cortés, and with the lopsided Champions League draw which pitting Lyon against VfL Wolfsburg in the quarterfinals (with the winner facing either PSG or Chelsea), Barcelona’s route to Budapest was clear.

Following a near-elimination in the first round as the team came down with a bout of gastroenteritis in Kazakhstan, Barca squeezed beyond Kazygurt before thoroughly disposing of Glasgow City in the round of 16. A clash with an out-of-season LSK team in March became a formality before Barcelona twitched and clenched their way to a win over Bayern Munich in the semi-finals, part of a stretch of five matches in 15 days.

In many ways, Barcelona’s history has been a winding road leading to Budapest. Every step – every stride – made by the club has come with the ambitions of ruling Europe. Each signing was made with the intention of making the team stronger in Europe, even if it has come at the cost of La Liga crowns.

Now, they are in the Champions League final one year ahead of schedule, against a mighty Lyon team looking to extend their record run to four straight European titles. The 90 minutes ahead of Barcelona at the Groupama Arena on Saturday are set to be the most taxing of the club’s 31-year history.