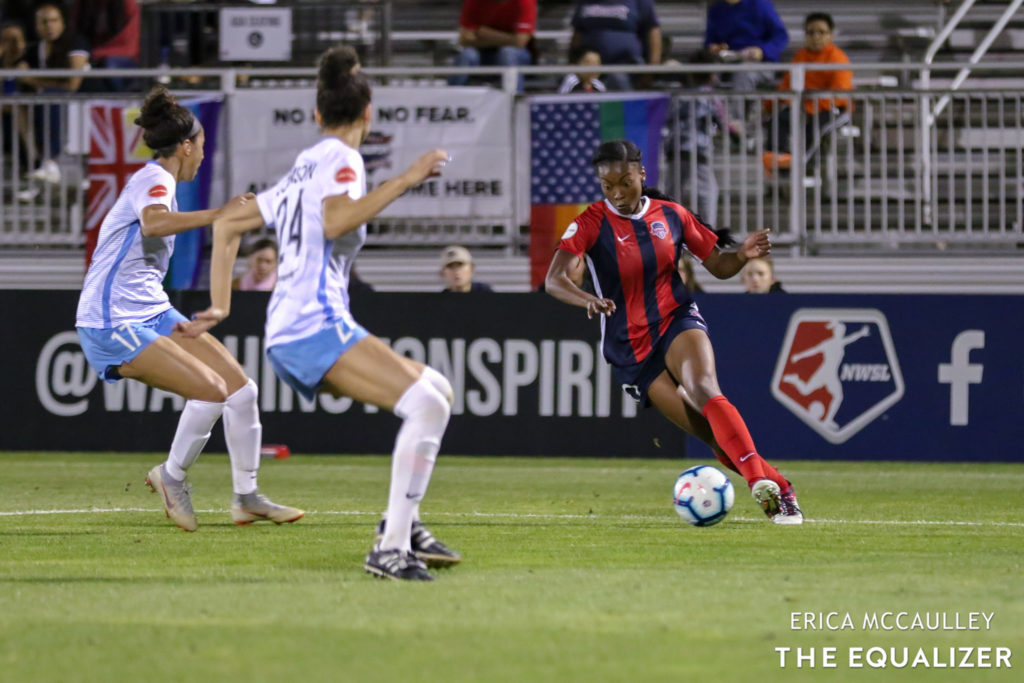 PISCATAWAY, N.J. — This was always going to be a special Mother’s Day for Cheyna Mattews. After all, it was less than nine months ago that Washington Spirit forward’s son, Josiah, was born. Her husband, Jordan, was in town for the weekend and had Josiah on his lap during the Spirit’s road match against Sky Blue FC. A relaxing day at home with family before heading back to Washington was on the agenda for Mother’s Day. Little did they know just how special the weekend would become.

“My son got to travel to this game because it was at 3 o’clock,” Matthews said, Josiah in her arms. “This is his first Spirit game.”

Matthews was basking in the glow of having scored a pair of goals in the game, a 3-2 victory over Sky Blue FC that improved the Spirit to 2-1-1. They were Matthews’ first two goals of the season — her first two goals as a mom.

“Don’t you love that on Mother’s Day,” Spirit coach Richie Burke exulted. “The only one we have on the team.”

Josiah was born August 24, a little more than a week before the Spirit finished their season. That gave Matthews about the same length of offseason as her teammates to work herself back into playing shape and get ready for the 2019 season.

“It was pretty much like I had a whole offseason,” she said. “Right after I had him it was like, okay it’s the offseason, I have literally an offseason like my teammates to get ready.”

Although Williams trained a bit with the Spirit in 2018, she knew all along she would not suit up for the team. Returning in 2019, the fourth-year pro walked into a club that underwent significant change — from the ownership group to the coaching staff and a major youth movement in the roster.

“We have so many new players,” she said. “Everybody’s awesome. It’s really easy to get up and get going with these girls. We work hard. We laugh when we can. The coaches are good about keeping us light but also being very serious about our techniques and things like that. So it’s been an overall great environment.”

In discussing the game and her two goals, Matthews did acknowledge it felt good to score — something she had not done since August 30, 2017 — but spent most of the time praising her teammates.

On the club’s youth movement, Matthews said: “You saw Jordan’s goal, right? Sick!” That was a reference to rookie midfielder Jordan DiBiasi who scored the one Spirit goal that Matthews did not.

“We worked in practice on a few of the longer balls, and all week Sam [Staab] has been pretty much on the money with that,” Matthews said, deflecting credit to rookie center back Staab, who fed her a long ball for the game’s opening goal. “To break through and score my first goal of the season felt nice, too.”

Matthews got herself in a bit of a tough spot off that pass before finally converting from a more difficult angle than was probably necessary. “That’s what I said to her at halftime: Could you make it any harder for yourself?” Burke said with a laugh.

The second goal was a clinical finish off a perfect pass by substitute Cali Farquharson. “Cali came on and was an immediate game-changer for us,” Matthews said. “She brought a spark of energy. She was very crisp and she just played a great ball through. It was easy to hit one time. I’m happy for Cali and her performance. Any time it’s a team buildup goal, those are always the best.”

Matthews is one of six mothers currently active on National Women’s Soccer League rosters (a seventh, Sydney Leroux, is pregnant again and not currently playing). Further complicating matters is that Cheyna’s husband, Jordan, plays for the San Francisco 49ers in the NFL and is often on the other side of the country. Matthews admits the balance has been challenging to this point, but that she is enjoying it.

“Man it’s…it’s been fun,” she said. “It’s definitely challenging, but I have an army behind me between my mother-in-law, my mom, my husband. We’ve got tons of help. So that makes it a little bit easier.”

My good luck charm ❤️ thankful to start this Mother’s day weekend right with 3 points and my 8 month old in the stands cheering mama on. Fitting weekend to get some goals haha #mamapower #bestfeeling #firstmothersday ❤️