The Lowdown: How USWNT bubble will impact NWSL 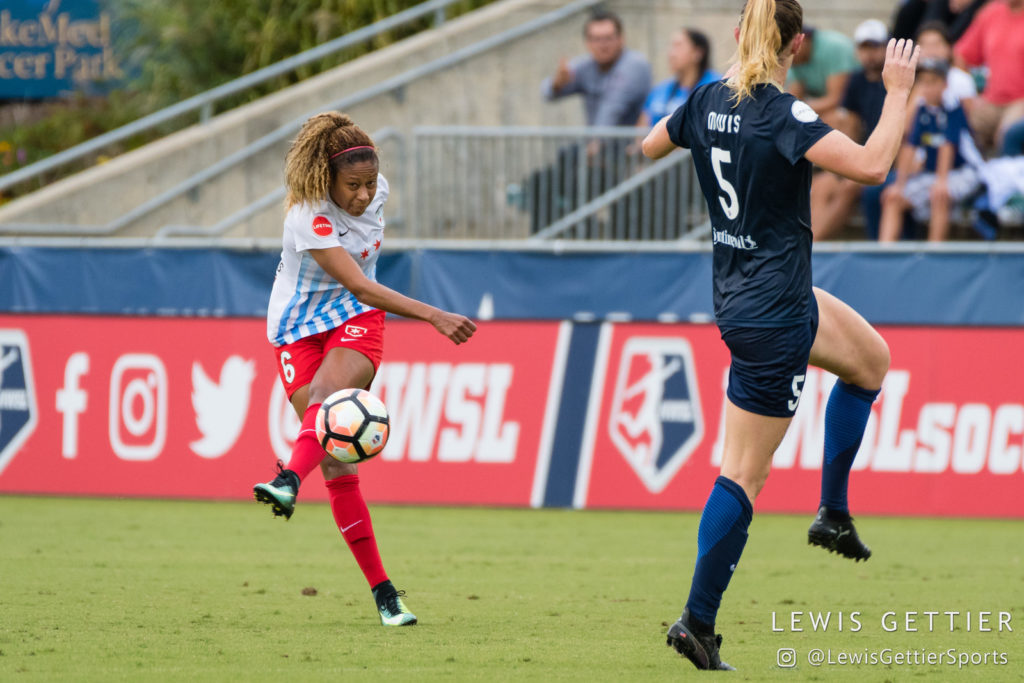 With the naming of the United States World Cup roster last week came the expected handwringing and haranguing. Some even went as far as to begin discussion of the next cycle because the current roster just wasn’t going to cut it. But what about said roster’s impact on NWSL?

For those who lament that not much seemed to change in the offseason, the U.S. roster drop won’t help. Yes the Red Stars lost one (Morgan Brian) and kept one (Casey Short) that wouldn’t have been anticipated even six weeks ago, but considering how important Short has been to their success and how uncertain Brian’s health has been since she has been in Chicago, that exchange looks like a net gain for the Red Stars.

There can be no debate in North Carolina or Orlando. The Courage get to hold on to McCall Zerboni who will continue to anchor the defensive side of the midfield when it looked like both she and Samantha Mewis would be gone. Meanwhile the Pride will lose Ali Krieger, one of their best and most consistent presences during what has been a wretched start to the season.

The exodus of World Cup players—and there are more to come as other teams assemble—was supposed to be the great equalizer. And it still might be. One game in the Red Stars were unable to capitalize with Casey Short in the starting lineup in Utah and the Courage allowed Sky Blue FC to go toe-to-toe for stretches of the second half and nearly conceded a late winner on two occasions.

Neither Short not Zerboni were at their best on the weekend. Short defended well as she usually does but was not enough of a factor moving forward and was sometimes caught out of position. Zerboni has been a touch off her best self much of this NWSL season, not a huge surprise considering the severity of the injury she suffered in September. I expect both will pick things up.

There is also a mental element to the next few weeks. It’s easy to type on a keyboard or send a few tweets suggesting that the Courage with Zerboni or the Red Stars with Short are going to tear up the league. But that rarely takes into account he human component of what has certainly been an emotionally-charged few days for both players. In Short’s case, she was a virtual lock for any U.S. camp when healthy over the last two years and whether it be her most recent injury, a drop in form or the reemergence of Ali Krieger, it has to hurt sitting by and watching the players you went to camp with over and over again getting their tickets to France while you get yours to Salt Lake City.

Zerboni’s path was different. Short was always ticketed for great things but has to overcome several serious injuries. Zerboni was a down-draft pick in WPS a decade ago and has slowly, steadily, and ruthlessly worked her way up the ranks until Jill Ellis just couldn’t turn her back anymore. Whether or not her September broken elbow ultimately did in her World Cup chances, it did appear at that time that Zerboni was on the fast track to France.

Why am I reviewing all of this again? Because it’s not a simple snap of the fingers that transforms you from the wrong side of the World Cup bubble to the elite of the NWSL.

Four years ago I was at the first Washington Spirit game after Crystal Dunn had been cut from the roster. She scored two goals, and then wormed her way into the center of an awaiting scrum of reporters and gleefully said: “Hi. I’m Crystal!” It was a remarkable moment of poise for a player who was on the cusp of taking over the league. By the end of the season she would have 15 goals and the MVP trophy and not a single day has passed since when she didn’t look like a lock for the 2019 World Cup roster.

That does not make Dunn’s story the norm. After the Western New York Flash won the 2016 NWSL Championship, Paul Riley noted that one of his challenges was getting Jaelene Hinkle’s spirits up after she was sent home as one of the final cuts from the Olympic roster.

The point of all this is that everyone reacts differently. Dunn took over the league, but she was also 22 and just coming into the prime years of her career. Hinkle has since had her U.S. career detailed for other reasons, but she was also 22 and has emerged since as one of the league’s top fullbacks. Short is 28 though and Zerboni 32 meaning it is less likely than probable either will be in the same position or better come 2023. That cannot be an easy reality to accept.

On the other side, the Red Stars could certainly use a healthy Morgan Brian in their midfield, but the presence of Danielle Colaprico and Vanessa DiBernardo should surely be enough to offset not having her. With Short on the back line it gives the Red Stars a back four that includes Katie Naughton and Sarah Gorden in the middle and Arin Wright as the fullback opposite Short. They will have other issues once Sam Kerr departs but as far as the U.S. roster is concerned, I think Short for Brian will be a net positive.

The situation in Orlando is altogether different. As I suspected, things looked a bit more energetic with some of the backup personnel on the pitch, but they still could not score and have only one goal in five matches—a bicycle kick from Alanna Kennedy. Krieger has been her usual steady self, but in her place against the Dash on Sunday was Erin Greening. The rookie third round pick gave a good account of herself, but it was Greening who got beat for the Dash goal when she took a passive approach to a one-v-one battle against Kealia Ohai. The finish from Ohai was spectacular, but you can’t help but wonder if Krieger could have made it a bit harder on her.

In some ways, Krieger’s absence may help the Pride in the long run. If the team is as bad as it looks to be then the days of Krieger, Marta, and Alex Morgan are not likely to produce anything better than the 2017 semifinal appearance. And getting players like Greening more playing time will either aid their development or expedite their departures.

When the dust settles, Jill Ellis’s handling of her bubble players is likely to make the Courage and Red Stars better and the Pride worse—not what anyone really needed or wants to hear.

-I didn’t think there were any replays of the red card shown to Katie Johnson that suggested it was the right call or the wrong call. It does make me sad though that the absence of hard evidence seems to lead to the general assumption that the referee screwed up. As someone put it to me, “Referees rarely show red cards in this league so there must have been something.” Johnson will mis this weekend’s showdown with the Courage.

-Speaking of the Courage, if they win or draw in Chicago on Sunday they will tie the NWSL record for most regular season matches played without losing at 16. That mark was set and is held by the 2014 Seattle Reign FC. The Reign streak was ended by the Red Stars. If the Courage extend they will have a chance to break it May 19 against the Royals, coached by Laura Harvey who was in Seattle during the Reign streak.

-Manchester City won the FA Cup on the weekend, but a tip of the hat to former Breakers coach Matt Beard for getting to the final in his first season with West Ham United.

-Back to Laura Harvey. I have devoted much attention to Harvey’s lack of top draft picks through her years in NWSL. But she appears to have unearthed another solid, late-round pick in Michelle Maemone. The no. 23 pick out of Pepperdine has started all three Royals matches at left back and has held her own as the club has three 1-0 wins to open the season. In past years Harvey has selected Arielle Ship (no. 26) and Kristen McNabb (no. 37) in 2017; Paige Nielsen (no. 25) in 2016; and Haley Kopmeyer (no. 31) in 2013.

-If you want to know why the Courage have only lost once since last season, look no further than the hustle on this play from Merritt Mathias. Sure she got lucky in how the ball bounced, but if she isn’t there, there is no luck to be had. https://twitter.com/NWSL/status/1124863315962937344

-That Marta challenge on Rachel Daly was ugly. Probably should have been a straight red. Not sure what she was doing with the corner flag, but let’s just be grateful no one got hurt.

–Pro Soccer USA‘s Jordan Culver reports that Kristen Edmonds suffered a knee injury in training this week and will be out at least a few weeks.

-Finally, you may have noticed that I have been calling the occasional match on the Yahoo Sports streams. As such I have and will continue to refrain from offering constructive analysis on the streams in general. But I can’t help but share this call of Kealia Ohai’s goal against the Pride from Sunday. The voice belongs to Jordan Angeli whose career was cut down by multiple ACL tears but remains one of my favorite people to interact with through my years of covering WoSo.